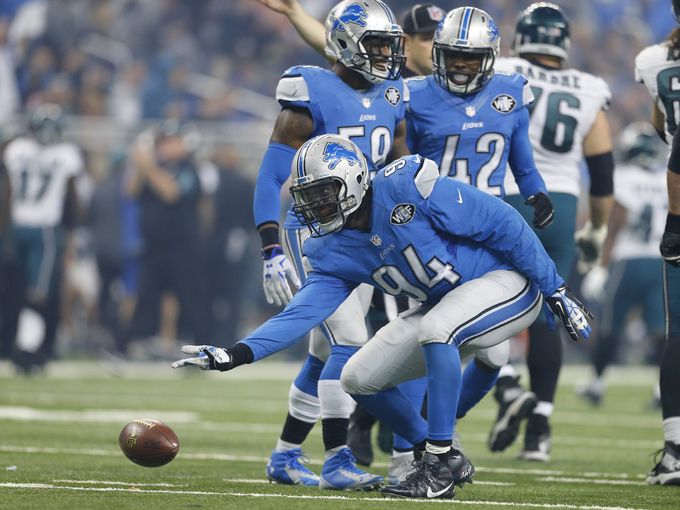 We finish our series on NFC North 2015 grades with a look at the Detroit Lions defense and special teams. The Lions defense had some major blows with injuries to DeAndre Levy (15.5), Tyrunn Walker (12 games), Rashean Mathis (9 games), Josh Wilson (8 games), Tulloch (perma turtle) and Haloti Ngata (2.5 games plus training camp (hamstring) in a scheme switch, plus various first half of season injuries).

The Lions defense was screwed in the first half of the season from 20 turnovers in 8 games from the offense. Teryl Austin managed to right the ship for Detroit and have a strong second half finish with some secondary and LB personnel changes (Diggs for Wilson, Quddus for Ihedigbo, Whitehead for Tulloch in coverage).

Let’s take a look at the Lions defense grades.

Detroit had strong play from the DE spot even without Suh.

Injuries were a big problem for defensive tackle in Detroit. Haloti Ngata progress early was hurt due to various hamstring and ankle injuries. Tyrunn Walker had a decent first 3.5 games before a broken leg ended his season. Carruan Reid was hurt and missed the first 2 games. Reid was average in run defense but lacked a pass rush with only 2 sacks in his second year in the league.

Andre Fluellen did well when re-signed mid-season but got hurt quickly. CJ Wilson and Khryi Thornton were waiver wire pick-ups and played poorly as backups. Gabe Wright was a disappointment as a rookie 4th round pick and was inactive most of the second half of the season. Jeremell Cudjo earned the 5th DT spot in pre-season but was poor in run defense despite average pass rush in 130 snaps.

Ngata did well as the season went on and he was healthier. Ngata had 2.5 sacks, 4 hits and 25 hurries for +6.6 pass rush grade. Ngata was below average due to injuries in run defense which was supposed to be his strong suit. Ngata got better in run defense as he got healthier. Walker was solid before an early injury. Reid was below average as to be expected from a second year 5th round pick. Wright was a major rookie disappointment. Detroit could re-sign Ngata and Walker or look to upgrade with younger DTs in free agency and the draft. Nick Fairley is a free agent as well if Quinn wants to bring back great memories.

The Lions had 42 sacks which matched their 2014 output. The Lions defensive ends played better without Suh in 2015. The Lions had 21 less hits and 11 less hurries in 2015 compared to 2014. The Lions blitzed 30 more time in 2015 compared to 2014. Ngata was a good pass rusher to match a great Ansah. Taylor and Jones were solid. Reid was below average and Walker got hurt and couldn’t match Fairley’s 8 game production output from 2014 due to injury.

The Lions need to add one more stud or solid pass rusher to pair with Ansah and continue the solid play from the two others and the backups. Austin is a good DC that can scheme well to bring pressure. Levy healthy, more Whitehead in coverage and better secondary play could have gotten the Lions pass rush back to 2014 form. We’ll see if that is the case in 2016.

The injury to DeAndre Levy was tough to overcome. Josh Bynes played well on the weak side in run defense and coverage but lacked Levy’s big play ability and mistake erasing skills.

Stephen Tulloch was good in run defense but terrible in coverage after his ACL surgery. Tahir Whitehead was solid in coverage and run defense. The Lions waited too long to play Whitehead over Tulloch more often.

Travis Lewis was solid on special teams but below average at the SAM LB spot. Kyle Van Noy only played 80 snaps. The 2014 2nd round pick is a disappointment after a stunted growth rookie seasons due to injury (sports hernia).

Darius Slay had a great year. He is a shut-down corner that can match up against the opposing teams best WR. Slay ranked 2nd overall per PFF for CBs. Also, Slay nabbed two interceptions on the season despite a lack of targets against him by opposing QBs. The Lions have a great corner with Slay. Aaron Rodgers agrees.

Veteran Rashean Mathis regressed from good to average in the first 7 games of the season (+.2 grade). Josh Wilson played poorly at nickel back the first 8 games of the season. Rookie Quandre Diggs started rough but played great in the slot the second half of the season. Diggs had a grade of +6.3 which is great considering his rough start (Denver and Seattle games) and very poor Week 17 game.

Second year 4th round pick, Nevin Lawson was poor with a -7.3 grade filling in as the second outside corner once Mathis went on IR with a concussion. However when targeted, Lawson did well with low completion percentage and low YPC. Lawson did play well in both Green Bay games and against Chicago in Week 17 though.

Third round pick rookie Alex Carter was injured all year. Carter will look to replace Mathis and Lawson next year unless Quinn adds another CB. Mathis could return too if he doesn’t retire at 35 due to his love for Caldwell. Crezdon Butler was signed mid-season and didn’t play much. Butler did have a huge pass break up on a two point conversion to help Detroit win in Lambeau. That play alone was worth his signing.

Glover Quin led the team with 4 interceptions which were down from 7 in 2014. Quin battled an ankle injury in the last 5 games but had a solid season as the free safety for Detroit. Quin is a leader and helps get the Lions set on defense. Quin can play better and got beat on a few occasions in 2015 which didn’t happen in 2013/2014.

James Ihedigbo coverage woes finally caught up to him in 2015 after a good coverage year in 2014. Ihedigbo was good in run defense but got beat way too often in coverage in 2015. Ihedigbo was benched for Isa Abdul Quddus for most of the second half of the season.

Quddus had a good season in coverage and run defense (+6.0 overall). The Lions secondary improved once Diggs and Quddus played more in the secondary. Don Carey was good on special teams (led league in special teams solo tackles) and only played 38 snaps on defense as the 4th safety.

Detroit only had 9 interceptions compared to 20 interceptions in 2014. The 21 less QB hits and 11 less hurries mattered coupled with other injuries and offensive turnovers for short field TDs and FGs. Detroit forced 9 fumbles compared to 7 in 2014. Detroit’s 18 turnovers were below average and down from 27 forced in 2014. The Lions scored 2 defensive TDs from their 18 turnovers. The Lions only had 14 drives start in opponent territory which was 26th ranked in the league. The Lions had 24 drives in 2014 start in opponent territory. The 11 less interceptions sticks out with that stat.

The Lions missed 13 field goals in 2014. The Lions missed only 2 in 2015 and both were in wins. Prater did miss 2 extra points and had one blocked (Denver game). The two misses by Prater against Green Bay almost cost them a streak ending Lambeau win after a Calvin Johnson muffed onside kick. Prater was very accurate though and the Lions have a good kicker for the next two seasons under contract. Sam Martin was excellent on kickoffs and punting the ball.

Abdullah was 2nd ranked in kick-off return average. Golden Tate was good on punt returns. The Lions were average in defending kick-offs and punts returns.

Adrian Peterson returning challenged their run defense way more than in 2014. Detroit gave up 4.2 YPC (20th) but actually had many games (10) where they were good in run defense. Detroit gave up 3.8 YPC or less 9 times in 2015. The Vikings had 4 YPC one week basically on one big Adrian Peterson run and shutting him down the rest of the Week 7 game.

It was feast or famine against Detroit. Peterson, Cardinals, Chiefs, Todd Gurley, 49ers and Forte in Week 17 feasted on Detroit. Detroit only gave up 3.2 YPC in 2014 so the feast games were a big change and caused some extra losses. The Ngata, Walker and Levy injuries were very costly.

Detroit allowed a 100.9 QB rating after a terrible first half of the season giving up high completion percentage and plays over 20 yards with few interceptions (9). Detroit was much better in the second half of the season with their personnel changes. The first half was one of the worst defenses and hurt by turnovers. The second half defense was one of the best defenses in the league once Detroit made coverage personnel changes.

Detroit needs to add one more stud defensive linemen to cause more turnovers in 2016. Ansah, Taylor, Levy, Bynes, Quin, Slay and Diggs are great building blocks for the 2016 defense.