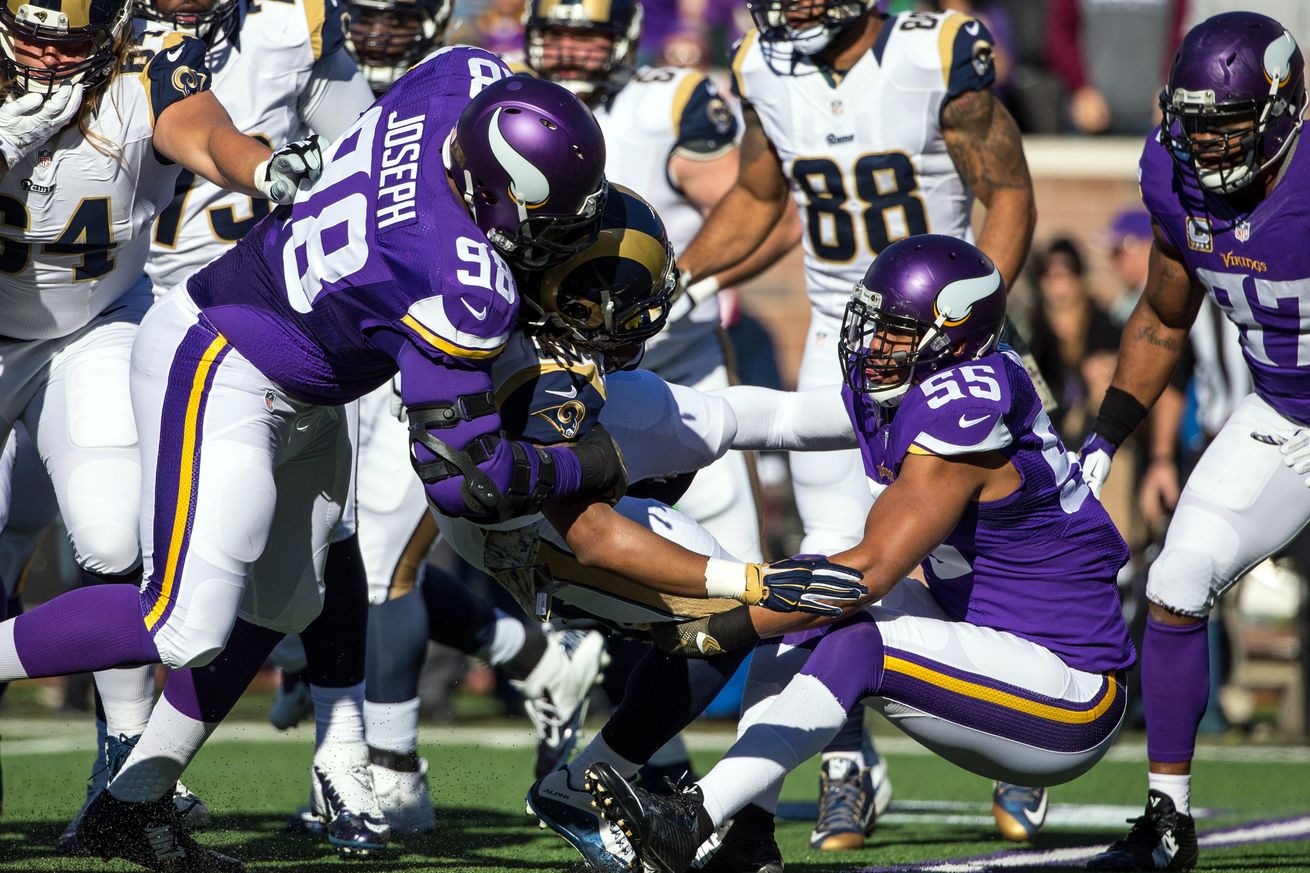 The Vikings won the NFC North because they play good solid defense under head coach Mike Zimmer. The Vikings were 5th in PPG allowing only 18.9 PPG. However, Minnesota allowed 4.3 YPC in the run game which was below average. Minnesota was 15th in the league allowing a 90 QB rating. Despite the average numbers, the Vikings were good at keeping the opponents’ point totals in check. The Vikings brought good pressure with 43 sacks, 64 hits and 228 hurries on the season. The Vikings forced an average 22 turnovers on the season. Minnesota had a mid-season swoon on defense due to some injuries to Linval Joseph, Harrison Smith and Anthony Barr. When the Vikings are healthy on defense, they are tough to score points against.

Everson Griffen is a beast with 10.5 sacks, 16 hits and 44 hurries. Robison added 5 sacks, 5 hits and 44 hurries. Danielle Hunter had a good rookie year with 6 sacks, 5 hits and 21 hurries as a backup DE. Tom Johnson is a great backup pass rushing DT with 5.5 sacks, 13 hits and 35 hurries. The Vikings have a lot of pass rush firepower on the defensive line. Linval Joseph had a good pass rushing season as well with .5 sacks, 4 hits and 19 hurries. Shariff Floyd had a down year in 2015 but was a beast in 2014 at the three technique DT spot.

Second round pick MLB Eric Kendricks had a good rookie year in run defense and blitzing. Kendricks struggled in coverage with a -10.6 grade. Greenway is an old veteran but had another terrible year on the weakside for Minnesota (-14.2).

Anthony Barr was excellent in run defense, blitzing and coverage (+25.4 overall). Barr is a great all- around LB and worth the 1st round pick from 2014. There was no weakness in his game besides an injury. Greenway is a free agent but the Vikings should upgrade in 2016. If the Vikings add a stud weak side LB in 2016, their defense could be elite partnered with their front four and depth.

Xavier Rhodes struggled with a -1.0 overall grade but is a number 1 CB. Terrence Newman was average in coverage but good in run defense at 37 years old. First round rookie Trae Waynes was limited (196 snaps) in his rookie season and struggled in coverage as most rookies do. The Vikings will need Waynes to step up in year 2 with Newman’s age and free agency in 2016. Captain Munnerlyn (+10.1) is an excellent slot CB. The Vikings didn’t use Josh Robinson, Marcus Sherels or Shaun Prater much in 2015. Robinson and Sherels is a free agent. Sherels is a solid punt returner. The Vikings have solid CBs but there is room for improvement with Rhodes and Waynes.

Harrison Smith is a top 3 safety in the league. Harrison had a +17.5 grade. The Vikings defense falls apart without Smith. Andrew Sendejo and Robert Blanton struggled at strong safety this year. Rookie Anthony Harris did well at safety in limited snaps (148 snaps). The Vikings need to upgrade at strong safety unless Harris steps up in year 2 but have a stud at free safety that drives their defense.

The Vikings won the NFC North due to a strong defense and Adrian Peterson. The Vikings defense played great in the wild card round despite a crazy scramble by Wilson for 7 points. The Vikings could be scary good on defense if they upgrade WLB and strong safety this offseason on top of better play from Floyd, Rhodes and Waynes. The Vikings are the team to beat for the NFC North until further notice. The B+ grade is scary because there is room for improvement on an already good defense (top 5 PPG).