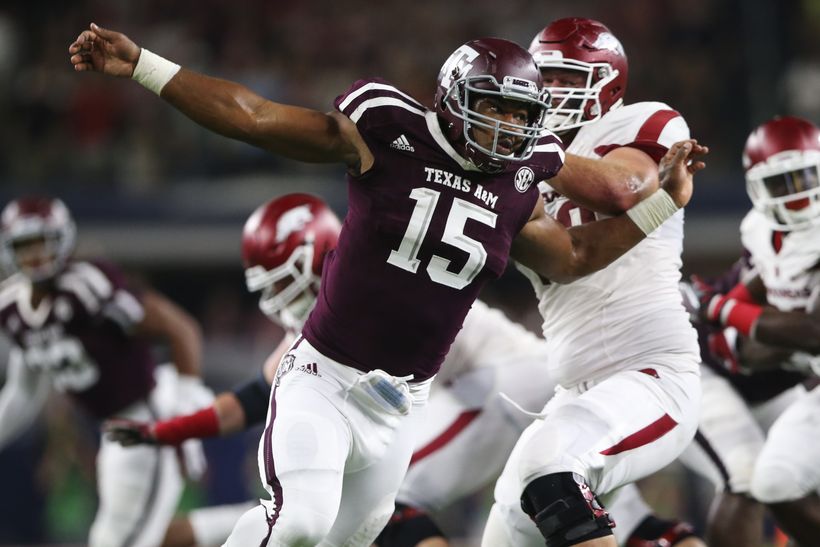 We turn our attention to defense for the draft prospect series. This is a very good draft for DE, CB and SS. Let’s take a look at the top defensive line prospects.

First Round
Myles Garrett DE (Texas A&M)
Garrett may be the best overall player in the draft and could go number 1 overall to the Browns. He is a freak of nature athletically with great size and speed. Garrett is 6’4 and 272 pounds with violent hands that can convert speed to power. He should be a monster DE in this league for years. Garrett compares to Demarcus Ware.

Jonathan Allen DT (Alabama)
Allen is 6’3 286 pound stud from Alabama. He is a three year starter that clogs lanes and penetrates the backfield often. Allen has great size, power and speed to rush the QB. Allen needs to stay low and work on his pad level and has injury concerns (shoulder). Allen could drop to mid first round in this draft due to shoulder concerns. Someone will get a good player in Allen.

Solomon Thomas (DE/DT) (Stanford)
Thomas is a flat our player maker for Stanford. He can play closed end and defensive tackle and is incredibly powerful and athletic. He is explosive off the snap and offers many pass rush moves. He’s got good speed and power to clog running lanes. He is shorter and is considered a tweener but should be an impactful pass rusher and run clogger. Thomas compares to Aaron Donald which would be a great find for any team.

Derek Barnett DE (Tennessee)
Barnett is a three year starter for the Volunteers and is stout with violent hands and flexible. Barnett was productive with 10, 10 and 13 sacks seasons in 2014-2016. He needs to add more pass rush moves and will have his hand in the dirt only. Barnett should be a first round pick and could be a top 15 pick.

Taco Charlton DE (Michigan)
Charlton finally produced in his senior year with Michigan. He had an incredible last two games against Ohio State and Florida State but can disappear in games. He has the size and bulk to be a closed end in the league and stop the run. Taco has good pass rush moves but can get his pads too high and be taken out of the play. Charlton should be a mid to late first round pick in this draft and compares to Justin Tuck.

Charles Harris (DE/OLB)
Harris is a smaller DE but incredibly quick and productive. Harris is explosive but lacks ideal strength and may be a situational pass rusher at first in the league. Harris was productive in 2015 and 2016 but needs to add some bulk and keep his speed. Harris could be an OLB for 3-4 teams and should be mid to late first round pick.

Malik McDowell DT (Michigan State)
McDowell is a boom or bust player that has a poor motor. However, when McDowell is revved up, he can be a good penetrating DT. McDowell is quick off the snap but lacks ideal power. He was a two year starter for the Spartans but must be more consistent with his production. McDowell could be a late first round pick and a boom or bust prospect.

Needs
Green Bay drafted Kenny Clark (Round 1) and Dean Lowry (Round 4) last season and added Ricky Jean Francois (DE) in free agency this offseason. Mike Daniels is a stud player (DE) and Letroy Guion is solid but facing a four game suspension. The Packers may add one more DE but it is not a high priority. Green Bay could add a DE/OLB hybrid early as they lost Julius Peppers and Datone Jones in free agency. Charles Harris may be a pick for the Packers in Round 1. We will talk about more OLBs for Green Bay in the next article.

The Bears added Akiem Hicks and Jonathan Bullard last offseason and have Eddie Goldman at nose tackle. John Jenkins was added one a one year dealt to backup Goldman. CJ Wilson and Mitch Unrein are experienced DE depth. If Myles Garrett fell, the Bears could take him at pick 3. Solomon Thomas and Jonathan Allen may be able to play 3-4 DE as well. Both would be big upgrades over Bullard, Wilson and Unrein.

The Lions need a closed end with Devin Taylor failing in 2016. Cornelius Washington was added to pair with Kerry Hyder who had a nice 2016 season. Ziggy Ansah is back healthy as well which is huge for Detroit’s pass rush. Armonty Bryant was re-signed and showed flashes for Detroit and 6th round pick Anthony Zettel moves into year 2 for the Lions. However, one more DE like Taco Charlton, Derek Barnett could complete the set and give Detroit a really strong pass rush.