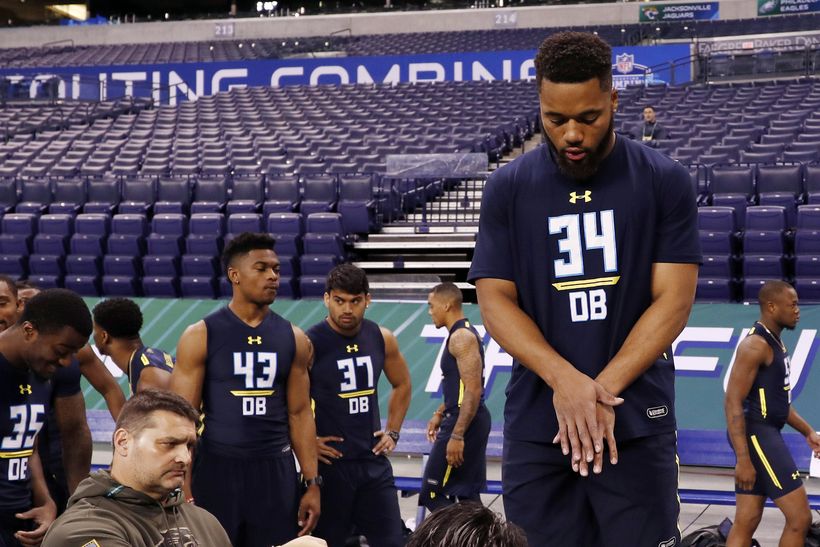 The final installment of the draft prospect series will look at the defensive secondary. This is a great draft for CB and safety prospects. Let’s take a look.

Round 1 CB
Marshon Lattimore (Ohio State)
Lattimore is 6’0 and 193 pounds from Ohio State. He may be the top CB in this deep CB draft class with good experience, technique and speed. Marshon ran a 4.36 40 and has good press and man coverage skills. Lattimore lacks bulk but is good in run support. He has some chronic hamstring issues but has been relatively healthy. Lattimore should be a top 10 pick in the draft.

Gareon Conley (Ohio State)
Conley is Lattimore’s counterpart at Ohio State. Conley stand 6’0 and 195 pounds with plenty of playing time with the Buckeyes. Conley can press and ran a 4.44 40. He has good speed and athleticism to stay in the back pocket of WRS. He allowed some big plays and some penalties at times but was shut down in 2016. Conley should be a mid-first round pick.

Marlon Humphrey (Alabama)
Humphrey is 6’0 and 197 pounds out of Alabama. He is durable and ran a 4.41 with good flexibility in his hips. He tracks the ball well but may only be an outside CB due to limitations in traffic. Humphrey is solid in run support and should be a first round CB on Thursday night.

Kevin King (Washington)
King has been rising up draft boards after the injury to his teammate Sidney Jones. King has great size at 6’3 and 200 pounds. King ran a 4.43 and has press and man cover ability with good coordination. King could be more physical and is better when facing the QB. King should be a late first round pick or early day 2 pick.

Chidobe Owuzie (Colorado)
Awuzie is 6’0 and 202 pounds from Colorado. He ran a 4.43 and has good closing speed. He can play zone or press and is a good athlete in the PAC 12. He had a lacerated kidney from 2014 but should have the bulk needed to stay heathy. Awuzie is a late round 1 or early day 2 pick.

Second TIER CB
Adoree Jackson (USC)
Jackson is a tremendous athlete that should be a nickel CB due to his size at 5’10 and 195 pounds. Jackson will be the most athletic player on the field most days and is a great returner as well. Adoree is incredibly experienced and a poor man’s Jabrill Peppers due to size issues. Jackson should be a second round pick.

TreDavious White (LSU)
White is 5’11 and 192 pounds but made big plays for the Tigers defense. White is fluid athletically and good feet but most work on his press coverage. Jalen Collins and Mathieu were better CBs for LSU but White has day 2 potential.

Quincy Wilson (Florida)
Wilson is 6’1 and 211 pounds with good size and speed for the rigors of the NFL. Wilson is a two year starter with a nice long big frame. He is good in press coverage and great in run defense. Wilson ran a 4.54 and isn’t sudden or explosive but produces in coverage. He should be a day 2 pick.

Sidney Jones (Washington)
Jones injured his achilles and should be out for the year. He was a borderline first round pick before the injury but has size limitations. A team may take a chance on the injured Jones on the second day of the draft.

Third TIER CBs
Fabian Moreau (UCLA) injured his pectoral and could be done for the year but may be a late day 2 pick.

Safety
Jamal Adams SS (LSU)
Adams is a stud top 10 prospect at safety. He is 6’0 and 214 pounds and hits like a truck. Adams has great range and size and can play in the box or in space. He will upgrade any secondary he is added.

Malik Hooker FS (Ohio State)
Hooker is a gifted athlete and experience player. He is a ball hawk and makes plays when the ball is back in his hands. He is a good tackler but must work on his angles. He can play special teams as well. Hooker should be a solid first round pick.

Jabrill Peppers SS (Michigan)
Peppers is a flat out playmaker for the Wolverines. Peppers can play in the box and is a tackling and splash play machine. Peppers could play slot CB as well or may be a free safety. He is a utility player that can do it all well. Peppers had great return ability as well from Michigan. He should be a late first round or early day 2 pick.

Josh Jones SS (NC State)
Jones has been rising up draft boards after a good combine. He is explosive and can shed blocks. He will be strong in the box and has some coverage skills with good range. He must tackle a little better but he should be a late Round 1 or Round 2 prospect.

Obi Melifonwu (Colorado)
Melifonwu is a huge safety with long arms. He timed very well at the combine and may work into the late first round. He has speed but needs to trust his instincts more and locate the ball better.

Budda Baker FS (Washington)
Baker is only 5’10 and 195 pounds but packs a big hit. He is a rangy player and physical player. He lacks ideal size and may have durability issues due to that. Baker could play in the slot or in the box despite his size. He should be a late Round 1 or Round 2 pick.

Needs
The Packers need a CB1 badly after Shields retired and Randall, Rollins and Gunter all struggled in 2016. Davon House returns after down years with Jacksonville but replaces Micah Hyde. The Packers need a number 1 CB but should have good number 2 and nickel with some depth with all the other young CBs on the team. Green Bay is set in the short term with safety but Dix needs a fifth year option for 2018 and Burnett is a free agent next offseason. Safety depth took a hit when Hyde went to Buffalo. CB and safety are both on the table for Green Bay in Rounds 1-4 due to CB1 and safety future and depth.

Detroit does not a short term secondary player or starter but could add at CB and safety for the long term. Nevin Lawson, DJ Hayden and Johnson Bademosi are free agents next year at CB. Quandre Diggs had a down year at nickel and will battle with DJ Hayden on a one year deal. Detroit could add one more CB to help them in the long term and compete with Nevin Lawson for the starting number 2 CB job. Detroit has Glover Quin, Tavon Wilson and Mile Killebrew but could add one more safety after Rafael Bush returned to the Saints. Quin and Wilson are free agents after this season and Quin will be 31 next year. Detroit must start thinking about the future at safety. Safety should be a day 2 or day 3 pick for Detroit in a deep class.

Chicago has a good player with third year safety Adrian Amos and added veteran strong safety Quentin Demps (12th ranked per PFF) in free agency. Chicago does have some young players in Deon Bush, Chris Prosinski and Harold Jones-Quartey but could add one more safety to compete for the backup spots. The Bears get Kyle Fuller back from injury at CB and added Prince Amukamara and Marcus Cooper (nickel). The Bears need more young talent and CB could a be Round 2 or Round 3 pick for Chicago but not likely a pick at pick 3 in Round 1. Fuller is not a good number 1 CB from 2014/2015 and now has injury questions. The Bears need to add a CB still and one that could be their top corner.

Minnesota has the starters set (Rhodes and Waynes) and some depth with Terrence Newman. However, Newman is older (38) and Mackenize Alexander (2nd round pick 2016) has a lot to prove at nickel CB replacing Captain Munnerlyn (Carolina return). Minnesota may wait until day 3 for secondary though as they have bigger needs (Oline, weak side LB) and lack a first round pick.