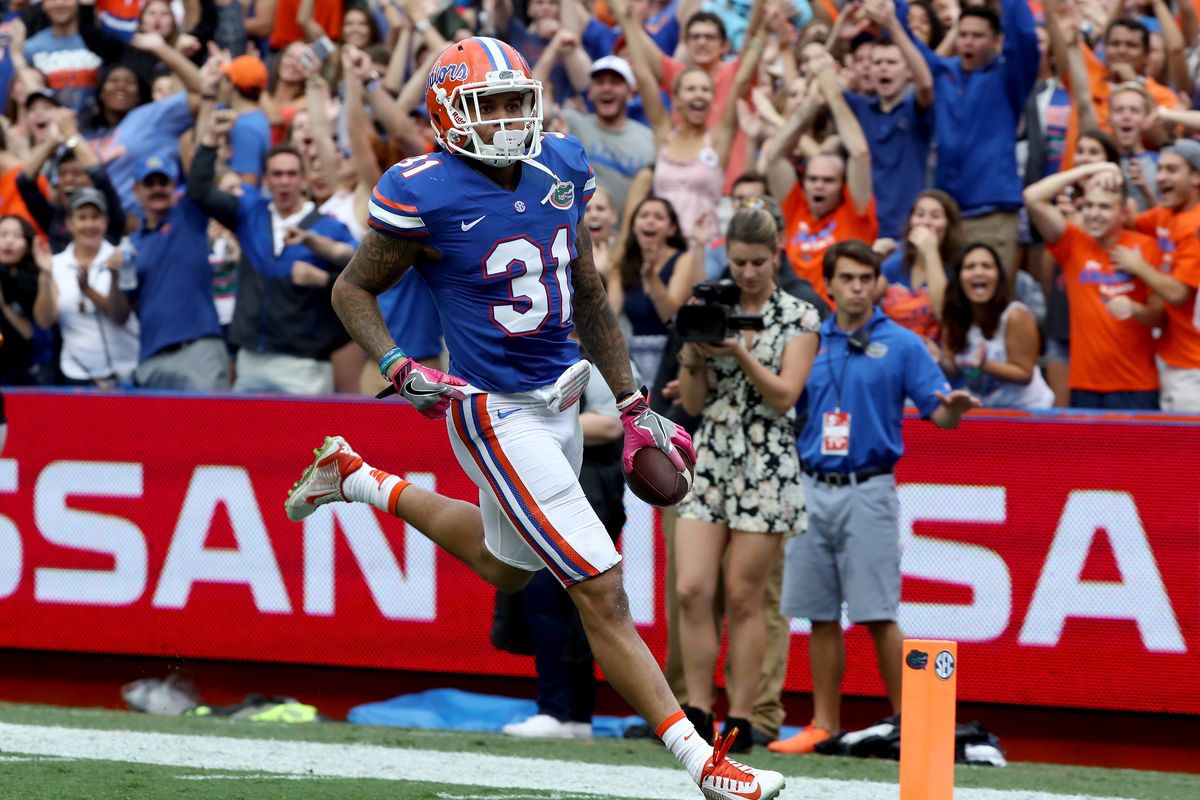 The Day 2 and Day 3 Draft Recap continues with the Packers and Lions. Let’s take a look at how great their drafts were.

Green Bay:
Thompson traded out of Round 1 and added pick 33 and a 4th round pick (108). Green Bay started day 2 getting much needed cornerback help.

Round 2 Pick 33: Kevin King Cornerback (Washington)
King is a tall corner (6’3) with good bulk and some speed (4.43) He has decent ball skills but his play speed and foot work needs some development. He lacks sudden change of direction and may have trouble with quick twitch WRs. His press is not strong enough but he has the size to develop in this area.

Round 2 Pick 61: Josh Jones Strong Safety (NC State)
Jones is 6’1 and 220 pounds with good speed. He is fluid with a good closing burst and aggressiveness. He may be too aggressive and run out of the play and focus on the QB too much. He will bite on play action but can be solid in coverage. He is a solid tackler and can play in the box as well.

Round 3 Pick 93: Montravious Adams DE/DT (Auburn)
Adams is 6’4 and 304 pounds with a good motor out of Auburn. He gets low with bull rush potential and can work the gaps well. He doesn’t use his hands well and has trouble getting off blocks. Adams has potential and will be a two gapper at DE in Green Bay’s 3-4 scheme.

Round 4 Pick 108: Vince Biegel OLB (Wisconsin)
Biegel is 6’3 and 246 pounds out of Wisconsin. TJ Watt got all the press but Biegel is a productive pass rusher. He is a team leader and strikes at the point of attack. He can recognize the run and pass well but is under sized and has some balance issues. He gets thrown around a lot on blocks but has good hustle.

Round 4 Pick 134: Jamaal Williams RB (BYU)
Williams is 6’0 and 212 pounds with considerable strength. He is a decisive runner and keeps his feet moving through contact. He doesn’t make people miss and gets armed tackle easily at times. He needs to work on his jump cut and lacks top end speed. He lacks the speed to get outside as well.

Round 5 Pick 175: Deangelo Yancey (Purdue)
Yancey is 6’2 and 200 pounds with a good frame. He builds up speed and can track the ball deep but can’t get off press coverage. He lacks burst and can be covered well by man coverage. He caught less than 50 percent of his targets in 2016.

Round 5 Pick 182: Aaron Jones RB (UTEP)
Jones is 5’9 and 208 pounds out of UTEP. He had huge production in four years but battled an ankle injury. He performed well against weaker competition.

Round 6 Pick 212: Kochi Amichia Center (South Florida)
Thompson needed center depth after losing Tretter in free agency. Amichia should backup Corey Linsley who will be a free agent next season.

Round 7: Devante Mays RB (Utah State)
Thompson took his 3rd running back with the shotgun approach. Mays played at a small school but was productive. He has good size at 230 pounds at 5’11.

Round 7: Malachi Dupre WR (LSU)
Dupre is 6’2 and 200 pounds. He can compete for the last WR job and ran a 4.52 40 with a good vertical jump. Dupre was inconsistent for LSU but has potential.

Detroit Lions (NFC North Favorites):
The Lions addressed their biggest need at LB in Round 1 with three down LB Jarrad Davis. Bob Quinn continued adding to the defense and big weapons on day 2 and 3 and even made a trade down in Round 3.

Pick 53 Round 2: Teez Tabor CB Florida
Tabor plays much faster than his timed speed. He has great instincts, ball skills and plays very well off-man. He has some press ability with good size at 6’0 and 199 pounds. He had 28 passes defense in two years and just flat out made plays for the Gators defense. He was slowed due to a hamstring injury in his 40 yard dash but he clearly has the game speed to be a good number 2 corner in the NFL.

Pick 96 Round 3: Kenny Golladay WR Northern Illinois
Bob Quinn made his first traded and moved from pick 85 to pick 96 with New England. Quinn got a 4th round pick (pick 124) for moving down 11 spots late in the third round. This was a great trade. The Lions selected tall WR Kenny Golladay with the pick. Golladay is 6’2 and 218 pounds with good size and hands. He must work on his route running but can win jump balls and be a red zone threat. Detroit needed a number 3 WR and they got a good prospect.

Pick 124 Round 4: Jalen Reeves-Maybin LB (Tennessee)
Reeves-Maybin is a smaller but quick LB. He will fit the Will spot nicely but dealt with shoulder injuries limiting his 2016 season. He is a fiery aggressive LB that has good speed to cover tight ends and running backs. He must keep clean and learn how to shed blocks but has great instincts. Maybin will be a big time special team contributor as well. The Lions double dipped well at LB in this draft.

Pick 128 Round 4: Michael Roberts Tight End (Toledo)
Detroit needed more depth at tight end and they got that in Round 4. Roberts had 16 TDs in 2016 and will be a big time red zone threat. Roberts has huge hands and is a good run blocker. He must work on his routes and separation but can find holes in zones.

Pick 165 Round 5: Jamaal Agnew CB (San Diego)
Agnew is a smaller but very fast corner from San Diego. He ran a 4.34 40 and can stick in coverage. He should play the slot and compete with DJ Hayden and Quandre Diggs. Detroit is deep at nickel. Agnew has punt return skills as well.

Pick 205 Round 6: Jeremiah Ledbetter DT (Arkansas)
Ledbetter is undersize and is a DE/DT tweener. He has a good motor and good measurable. He provides a pass rush but must hold up at the point of attack better.

Pick 221 Round 6: Brad Kaaya QB (Miami)
Bye, Felicia. Brad Kaaya was a productive Miami QB. He has a strong arm and makes good decisions. He will compete with Jake Rudock for the backup QB spot and adds another solid QB for depth.

Pick 250 Round 7: Pat O’ Connor (Eastern Michigan)
O’Connor is undersize and coming off an injury but was a highly productive MAC pass rusher. He should fight for the practice squad in 2017.

Summary
The Lions had a great draft filling one big need at LB while adding to their back 7 and big red zone weapons. Quinn made a great trade and got a good Will LB and special teamer with the extra 4th round pick. Roberts and Golladay will see snaps and be red zone threats. Maybin could have a future at Will LB and move Davis to ILB replacing Whitehead. Whitehead can move and compete with SAM LB with Antwione Williams.

The Packers addressed secondary, DE and OLB concerns and added three RBs from Round 4, Round 5 and Round 7. Green Bay rounded out their WR and Center depth as well. We’ll see if King, Randall or Rollins can step into the number 1 CB role that Green Bay desperately needs. Jones should play a nice role as a rookie and can be a playmaker. Jones may be the future with Burnett hitting free agency in 2018. Adams will have to earn playing time against Jean-Francois, Guion and Lowry. Green Bay needed a RB but they didn’t get any good ones. We’ll see if a late round RB can save them and be a workhorse. Right now Ty Montgomery is their starting RB.

Minnesota added a good RB in Cook, a new center and depth to their offensive line interior, defensive line and linebacker. The Bears got their “franchise “QB and added three small school prospects and a 4th round free safety. Sheehan and Cohen have some potential at TE and change of pace back from Round 2 or 4. Jackson provides depth behind Amos.

It is way too early to give grades based on production. Packers and Lions got good value with a trade down while adding a 4th rounder and Rick Spielman made a slew of trades (both up and down). The Bears made the biggest move for Trubisky but were able to trade back in Round 2 and recoup some picks. There were no major reaches in this draft by any North team. Now the fun begins as we see how these prospects turn into players in the NFC North.