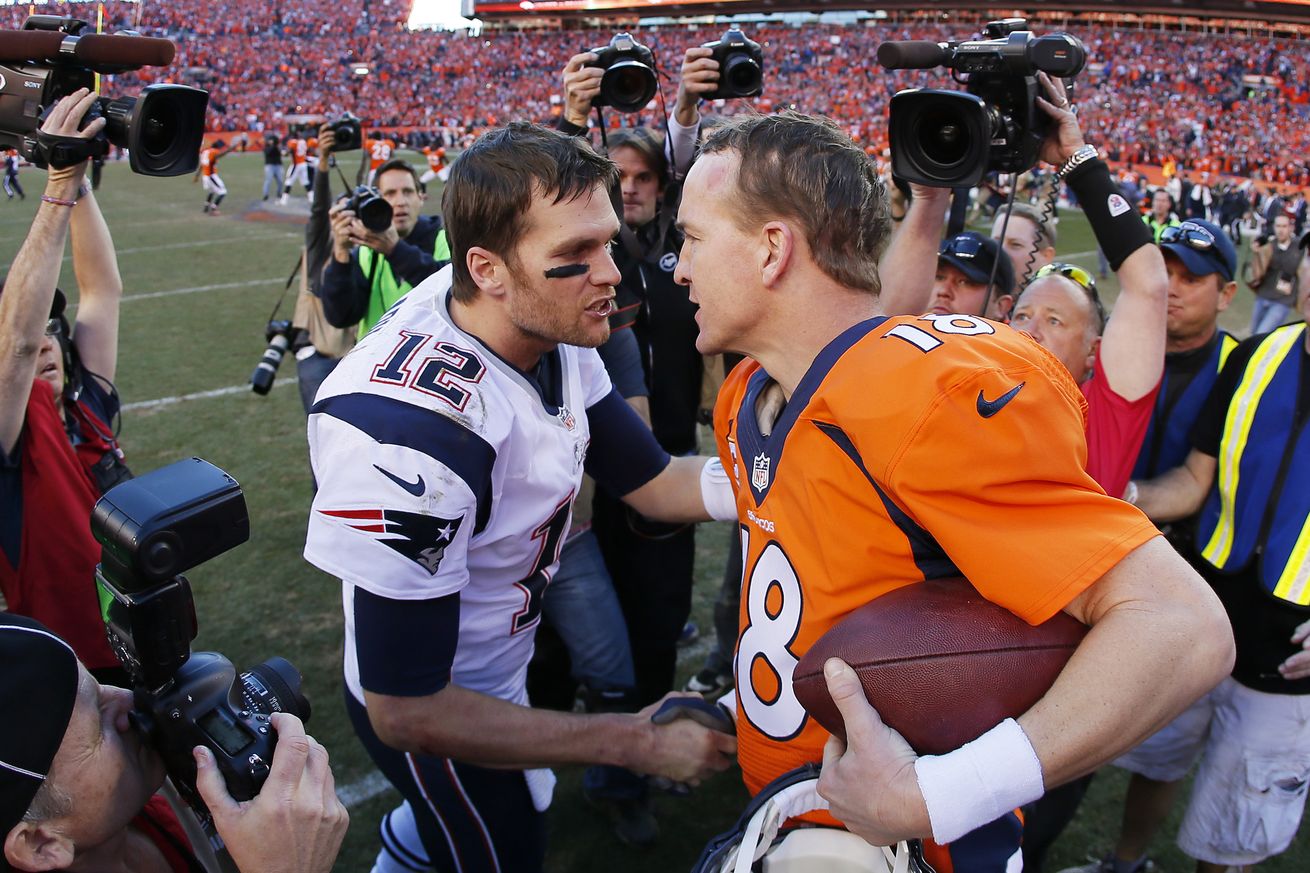 The Patriots beat the Chiefs 27-20 in the divisional round after winning the AFC East for the millionth time at 12-4. The Patriots travel to Denver (13-4) and take on the AFC West number 1 seed led by a great defense and some guy named Peyton Manning. Denver beat Pittsburgh 23-16 due to a late fumble by the Steelers backup RB Trouissant. The Steelers hung tough missing Antonio Brown, LeVeon Bell and Deangelo Williams but couldn’t generate enough offense against the stingy Broncos defense. This will be the 5th Tom Brady versus Peyton Manning matchup in the playoffs but also a game featuring two good defenses.

The Patriots have a great offense under Tom Brady despite his lack of WRs. Brady is having another great season with 64.4% completion, 7.6 YPA with 36 TDs and 7 interceptions. The Patriots are 3rd in PPG scoring 29.1 per contest. The Patriots are 10th in defensive PPG giving up only 19.6 PPG and forced 21 turnovers.

Rob Gronkowski (1,176 yards, 16.7 YPC and 11 TDs) is a monster at TE. He is almost unguardable and had another big game against Kansas City despite some injuries. Julian Edelman returned from his foot injury and had a 100 yard game against the Chiefs in the slot. Amendola has 648 yards 10 YPC and 3 TDs on the season and is the backup to Edelman again. Brandon Lafell isn’t having a good year with 515 yards and 0 TDs after missing the first half of the season. James White is a nice late find at RB with 410 yards receiving and 4 TDs.

The Patriots have run game issues due to the injuries to LaGarette Blount (4.3 YPC), Dion Lewis (4.8 YPC) and several offensive linemen (Solder/Stork). The Patriots haven’t run the ball well in Week 17 or the divisional round after signing veteran Steven Jackson and using White and Bolden more. Denver is best in the league allowing only 3.3 YPC. Don’t expect the Patriots to run the ball well on Sunday.

New England still has a very potent offense. Brady was in the middle of the pack in pressure percentage so the Broncos fire power rushing the passer will be the biggest matchup. If the Broncos can disrupt Brady, they have a great shot to win. Brady will surely get rid of the ball quickly to Edelman, Gronkowski and Amendola as the game plan.

The Patriots have the 10th ranked defense allowing 19.7 PPG. They have only forced 21 turnovers but have firepower with Chandler Jones (12.5 sacks, 8, hits 41), Rob Ninkovich (5.5 sacks, 11 hits, 25 hurries), Jabaal Sheard (8 sacks, 5 hits, 42 hurries) and Jamie Collins (5.5 sacks, 2 hits, 8 hurries). Collins is dealing with a back injury and is questionable to play and ILB Jerod Mayo was put on IR this week. The Patriots have a lot of nagging ankle and knee injuries or Belichick is being coy with the injury report.

The Patriots are 13th with allowing an 87 QB rating. Belichick always has the Patriots defense prepared and especially at home in the playoffs. Malcom Butler, Logan Ryan, Devin McCourty, Deron Harmon and Patrick Chung are an underrated secondary. Manning, Sanders and Thomas will have a tough task to get open.

The Broncos have the 4th ranked PPG defense allowing 18.5 PPG. The Broncos defense has 52 sacks led by Von Miller and DeMarcus Ware. The Broncos secondary with Aqib Talib, Chris Harris, Darrian Stewart and TJ Ward is very tough to pass against. Harris is dealing with an injury though which could help Brady. The Patriots must protect Brady to be able to score enough points in this game.

The Broncos offense is below average (22.2 PPG was 19th) with an old Peyton Manning. Manning tallied 59.8% completion, 6.8 YPA and 9 TDS with 17 interceptions (second in league despite missing 5 games). Manning was awful but the Broncos won with defense and timely plays. Backup Brock Osweiler is banged up and the Broncos turn back to Manning for a story book ending to his career. The Broncos beat the Patriots in the regular season 30-24 against Brock Osweiler. We will see if the Patriots can do more in this huge rematch and hold the Broncos to their average of 22 PPG or less.

Manning must rely on his run game. Ronnie Hillman has 4.2 YPC and CJ Anderson notched 4.7 YPC. They must have success to protect Manning. New England is 11th in run defense allowing 4.0 YPC. If Hillman and Anderson run well, the Broncos have a good shot to score 20-24 points in order to win with great defense.

Everyone is sick of Manning versus Brady angle. However, this will be a great matchup defensively and it’s always fun to see how the Patriots attack a strong defense. Look for the Tom Brady and Belichick to get to his 7th Super bowl by edging the Broncos 24-20.

Carolina held on to beat Seattle 31-24 last week and improve to 16-1. Carolina was up 31-0 and gave up 24 unanswered points. Seattle could not recover the onside kick in the end. Arizona beat Green Bay 26-20 in a thrilling overtime game. Arizona led 20-13 but Green Bay hit another hail mary. Green Bay is the luckiest team on the planet. Arizona had enough of that bullshit and Palmer hit a big gainer to Fitzgerald in overtime. Fitz scored a TD two plays later on a shovel pass. Green Bay was correct to not go for 2 at the end of regulation. Arizona came away with a big playoff win at home.

This game will be another great defensive matchup. Carolina is 6th in the league allowing 19.3 PPG. Arizona is 7th in defense giving up 19.6 PPG. Arizona has forced 33 turnovers on the season. The Panthers have a strong PPG defense and forced an incredible 39 turnovers. Carolina is strong against the run allowing only 3.9 YPC (7th). Arizona only gives up 3.9 YPC on the ground too. Carolina allows a 73 QB rating which is best in the league. Arizona allows an 80.9 QB rating which is 8th best in the league. There are so many good defensive players on both teams. Both have great defenses and both have great offenses. It will be an incredible matchup to see great offenses against good defenses.

Carolina’s secondary is led by Josh Norman. Carolina has 44 sacks on the season led by DT Kawan Short (11). Carolina is best in the league allowing only 73.5 QB rating. It could be a long day for Arizona if they can’t get open. Carolina has injuries to Charles Tillman and Bene Benikwere at cornerback which helps Arizona. Carolina still has Norman, Kurt Coleman (7 ints) and strong LB coverage (Kuechly and Davis).

David Johnson is an excellent rookie running back with 4.6 YPC on 125 carries. Chris Johnson is on IR but had 4.2 YPC on 196 carries. Andre Ellington had 6.4 YPC on 45 carries. Arizona can run the ball and pass the ball very well.

The Panthers are first in PPG scoring 31.3 per contest on the season. Cam Newton is having an MVP year with 35 TDs and 10 interceptions for a 99.4 rating. Newton is producing without a number one WR (Kelvin Benjamin). However, having Greg Olsen helps Newton big time.

Olsen has 1,104 yards and 7 TDs. Carolina has decent number 2-4 WRS in Ted Ginn, Devin Funchess and Jericho Cotchery. Ted Ginn isn’t efficient but his 739 yards, 16.8 YPC and 10 TDs is enough big plays for the Panthers stingy defense. Funchess is a rookie with 473 yards and 5 TDs. Cotchery added 485 yard and 3 TDs. Corey Brown has 447 yards and 4 TDs. Newton spreads the ball around and has a running game with Jonathan Stewart (4.1 YPC). Newton can also run with 636 yards and 4.8 YPC notching 10 rushing TDs. Newton really is a special two way player.

Arizona only has 38 sacks on the year and is led by Dwight Freeney (8 sacks, 4 hits and 24 hurries) and Calais Campbell (5 sacks, 13 hits and 27 hurries). Veteran Frostee Rucker is having a nice year at 3-4 DE for the Cardinals. Arizona blitzes often with Deonne Buchannon, Kevin Minter and Tony Jefferson from various spots. Arizona has some injuries at OLB with Lamar Woodley and Alex Okafor so may need to be more creative with blitzing.

Arizona has good cover secondary led by Patrick Peterson despite the loss of Tyrann Mathieu. Arizona covering Greg Olsen will be a key matchup at LB and safety with Reshad Johnson, Deonne Buchannon, Kevin Minter and Tony Jefferson. Peterson should shut down anyone on his side of the field. Arizona can stop the run but must focus on not allowing Newton to run for first downs and extend drives. Arizona corners Jerraud Powers and Justin Bethel (new slot) can be beaten and Newton will focus on exploiting them.

Carolina is at home and only lost one game all season (which was on the road). Carolina held on against Seattle and Arizona won in OT. This will be the first matchup between the two teams this year. They are the 1 and 2 seeds in the NFC and Carolina beat Arizona in the wild card round last year while Carson Palmer was injured. This is just a great matchup that should display great football. I’ve doubted Carolina all season but they really do have a great team. Carolina will cement that status if they can beat Arizona and move on to their franchise’s second Super Bowl.

Enjoy the championship games. Only 3 more games of real football left in the season.