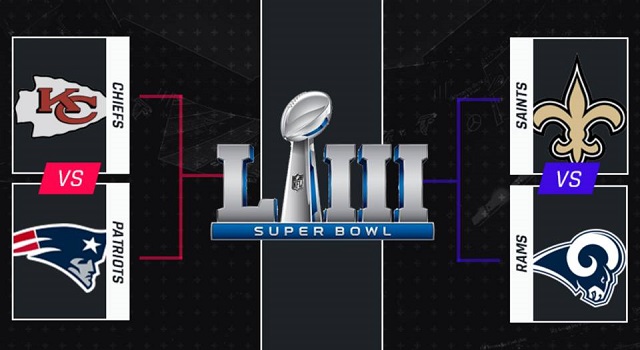 The AFC & NFC Conference Championship games are this Sunday.  Can you believe it?  The NFL is almost over for another season and soon we will have a big cry together.  Well, y’all might, but as of now, my team is still in it.  Big Dick Nick was on his way to another miraculous 4th quarter until Alshon Jeffery decided that he did not want to take a trip to Los Angeles this weekend.  Probably because of all the homeless and crime.  I mean, let’s be real, L.A. is a shithole.  Hell, SpaceX is moving their Mars stuff from L.A. to Texas.  How bad do you have to be for someone to choose Texas over you?

The rest of the Divisional Round games didn’t turn out the way I expected.  Patrick Mahomes made Indy his bitch when I really thought Luck had a shot.  The Rams eliminated Dallas in surprising fashion even though I thought Dallas was going to win.  Phillip Rivers lost to Brady…again, totally disregarding the fact that I had the Chargers going to the Super Bowl.  The only pick I got right was the Saints over the Eagles, and if I’m being truthful, I only picked the Saints because they’re my team.

Lighter week for the Divisional Round than we had for the Wild Card Round.  Glove is back, but he still didn’t score a point.  MiB was the only one to score a point.  We now have a 4-way tie at the top of the rankings and I don’t think we have enough lube.  Only 3 more games left to separate yourself from the masses and win the coveted CYST Playoff Champion trophy, so be sure to make your picks.

(That’s it. You can just scroll to the comments now.)

(Cause the games were fucked up, right?)

(You should try harder.)

The above represents all games, since there isn’t a guarantee to be an NFCN/S team in the playoffs.  My team is in and they are an NFCS team, but they could be gone by Sunday.  This only contains those of you who actually scored a point in CYST.  Want to see your name here?  Do better and stop sucking.

2 games on Sunday.  That’s it.   You should just go make your picks now though so you don’t forget and pick all the games.  Playoffs CYST doesn’t separate NFCN/S games from the rest.  I know the site will say that you don’t have to pick the non-NFCN/S games, but that’s only because the owner of that site was too lazy to program in some logic there for when it’s the playoffs.  Really, get on over to the CYST site and make your picks before you forget.  Go, go make your picks.  How do you get to the site so that you can pick games?  Well, that’s a good question.  If only there was a uniform resource locator in the form of a hyperlink.