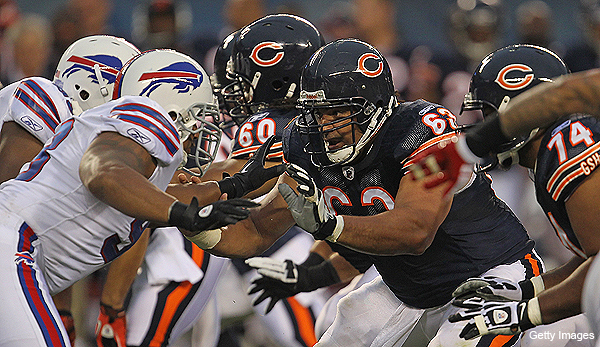 The Chicago Bears and Buffalo Bills have met a total of 11 times throughout their history, with the Bears having won seven of those match-ups. The last meeting between the teams was in 2010 when the Bears defeated the Bills 22-19 in a game played in Toronto, Ontario.

The Bears defense vs. the Bills offense. Both units struggled mightily in the preseason so getting off to a solid start for each could set the tone for each unit moving forward. The Bears defense under second-year defensive coordinator Mel Tucker will be showing a completely new scheme, with many new faces such as veterans Jared Allen, Lamarr Houston, and Ryan Mundy having taken over starting duties. This unit will take some time to get their feet under them, and going against a struggling offense such as the Bills might be what the doctor ordered.

For the Bears and continuing with the defensive theme, eyes should be on new defensive end Jared Allen. Allen was added as a free agent in the off-season from the Minnesota Vikings, and with the departure of defensive end Julius Peppers to the rival Green Bay Packers, Allen will be tasked with putting much needed pressure on the quarterback. Allen played sparingly in the preseason, so how he starts off the 2014 season in live action will go a long way in seeing how the revamped Bears defensive line performs overall.

For the Bills, second-year quarterback E.J. Manuel has to give the team the solid quarterback play they haven’t seen since the likes of Hall of Famer Jim Kelly. The Bills used their 2013 14th overall draft pick on Manuel, so he needs to begin performing like a first round pick. Manuel struggled during the preseason, completing 63% of his passes for 461 yards, one touchdown, and two interceptions, therefore for Manuel to avoid the dreaded “draft bust” stigma he will need to elevate his play and solidify that position.

With home field advantage, the Bears offense will prove too much for the Bills defense with what will be sloppy game overall for both teams. Bears 31, Bills 17.