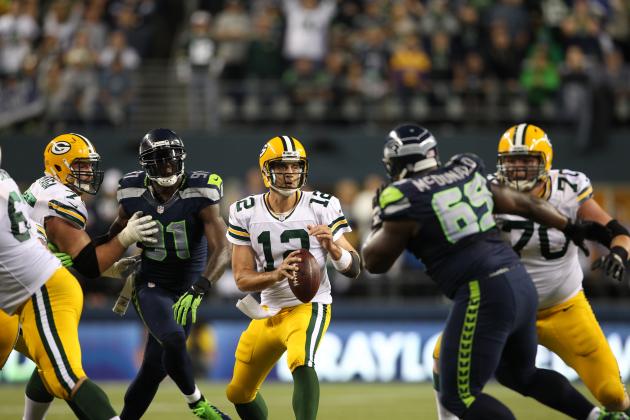 The Green Bay Packers (0-0) head west on Thursday night to take on the defending Super Bowl Champion Seattle Seahawks (0-0). Both teams have Super Bowl aspirations this year, making it an exciting matchup between what should be one of the best offenses in the NFL against the best defensive unit in football. Kickoff from CenturyLink Field is scheduled for 7:30 PM, or whenever Pharrell and his hat decide to leave the stage. Oddsmakers currently have the Seahawks as 5 to 6 point favorites.

The Battle in the Trenches

As is often the case, this game will be won or lost in the trenches. The much ballyhooed Seahawks defensive line boasts some serious size and quickness, something Packers fans remember all too well as the Seahawks sacked Packers quarterback Aaron Rodgers 8 times in their last meeting, with 6 of those sacks coming in the first half. Rookie center Corey Linsley will get his first career start in a raucous environment, lining up across from Brandon Mebane (6’ 1 311), Kevin Williams (6’ 5 311), and Tony McDaniel (6’ 7 305). Linsley showed well in August, but this is a tall order for a guy who has yet to take even an exhibition game snap with Aaron Rodgers at the helm.

Offensively, look for the Packers to commit to the run. One of the best ways to combat an explosive pass rush is to run the football effectively, so running backs Eddie Lacy and James Starks will need to carry the load. If Green Bay finds themselves in too many 3rd and long situations, it could spell trouble for the Packers.

Defensively, Green Bay will need to bring its A game. Although the 2013 Seahawks offense was average in terms of yardage and personnel, it was nonetheless brutally efficient. Its success was based largely on the run game and play-action passing, things that defensive coordinator Dom Capers & Co. have been unable to stop in recent seasons. The defensive line looks different this year, as Green Bay sacrificed some size up front in favor of speed and athleticism. Despite what we or our friends at Pro Football Focus might have us believe, the loss of nose tackle B.J. Raji looms large, and this group suddenly finds itself without much depth. Packers defensive end Khyri Thorton (torn hamstring) was also recently placed on injured reserve. Letroy Guion will get the start in Raji’s place. The Packers have the unenviable task of corralling Seahawks running back Marshawn Lynch, who, despite his diminishing effectiveness, is one of the game’s best.

Taking a page out of Philadelphia Eagles Head Coach Chip Kelly’s book, the Packers made tempo a point of emphasis this year, with hopes of running 70+ offensive plays per game. The faster the offense can rattle off plays tonight, the fewer substitutions the Seahawks defense can make. The Packers believe Rodgers will be able to find and exploit favorable matchups in these situations. Of course, if Green Bay is unable to make first downs, this strategy could backfire, putting the Packers defense back on the field.

Outside of place kicker Mason Crosby, there was nothing special about the 2013 Packers special teams unit. Football Outsiders ranked Green Bay 19th in weighted DVOA (value over average), while the Seahawks ranked 6th. One need look no further than this year’s Super Bowl to see how dynamic this Seattle unit can be, as wide receiver Percy Harvin’s return touchdown broke the game wide open. This is a unit that covers kicks and punts exceptionally well. Place kicker Steven Hauschka and punter Jon Ryan are among the best at their respective positions. Green Bay might not win this game on special teams, but they can surely lose it here if they don’t execute.

The emphasis on defensive holding and pass interference has been discussed ad nauseam this preseason, as defensive penalties have increased exponentially. Many argue that this newfound focus on defensive penalties is a direct result of the Legion of Boom, which is known for its aggressive and sometimes grabby defending. I don’t like to see referees influence the outcome of games (*cough* Fail Mary *cough*) but it’s hard to deny that the way the referees call things tonight is important.

For all the praise McCarthy has received over the years in turning the Packers into an offensive juggernaut, he’s shown a propensity for stubbornness and an inability to make in-game offensive scheme adjustments. McCarthy needs to call a great game tonight, and he may need to make adjustments to playcalling, protection, or both. The Packers need to avoid a repeat of his horrendously coached first half against the Seahawks in 2012.

Not much needs to be said about cornerbacks Richard Sherman and Byron Maxwell. Sherman is arguably the best cornerback in the NFL (although I’m partial to Patrick Peterson), and Maxwell is a very good player in his own right. Lane, a 6th round selection in the 2012 NFL Draft, is largely unproven.  Despite his comments that Packers wide receiver Randall Cobb “definitely can be stopped,” this is likely to be a plus matchup for Green Bay, and one that merits attention. Lane isn’t quite healthy, and he’s likely to see a fair amount wide receiver Jarrett Boykin in addition to Cobb. The Seahawks need a solid performance from Lane tonight.

The 2013 Packers struggled to stop the pass in the middle of the field (I probably could have stopped after pass), as Green Bay’s linebackers, corners, and safeties were routinely beat in this area. Unheralded tight end Zach Miller is a plus receiver, and I expect him to have an impact on this game as the Packers look to take away Harvin, wide receiver Doug Baldwin, and Russell Wilson’s new favorite target, wide receiver Jermaine Kearse.

The Packers will win if…

The Packers can weather the early storm, Eddie Lacy can run the ball effectively, and Green Bay can avoid giving up big plays on special teams. A little luck in the turnover department wouldn’t hurt either—Wilson has compiled a 31:7 TD-to-INT ratio at home in his first two seasons. Green Bay likely needs one tonight.

The Seahawks will win if…

Seattle does what it does best. This team is the class of the NFC.