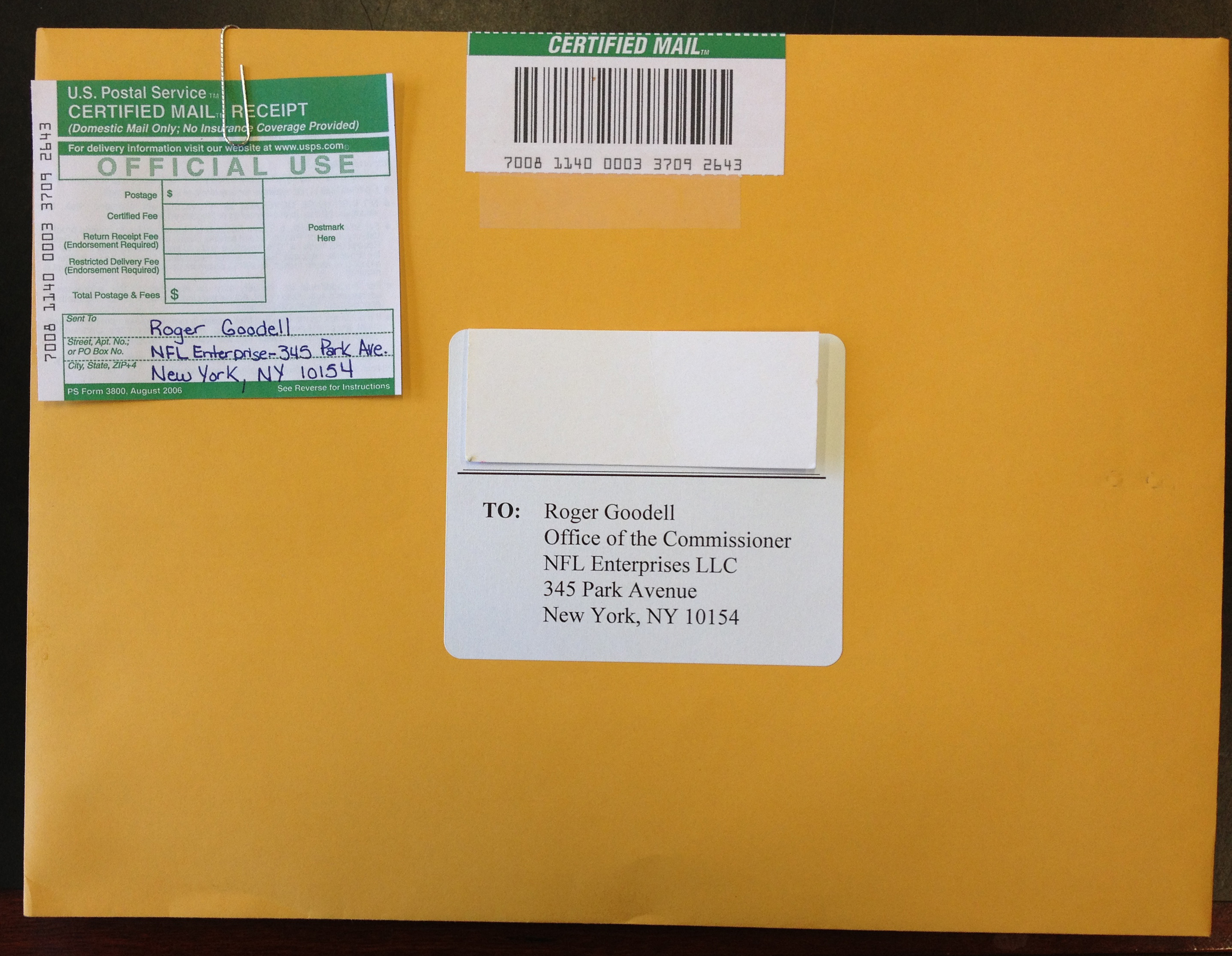 Re: Your Duty and Authority to Protect the Integrity of the NFL

There is no intelligent debate: the integrity of NFL Football has been severely damaged and your legacy as NFL Commissioner is at stake. Please consider the following and govern yourself accordingly.

As you are well aware: NFL Rule 17, Section 2, Article 1, gives you the power to intervene for the good of the game if and when situations of “calamity” have “… a major effect on the result of the game.” Although much attention has been focused on the last play of the Green Bay vs. Seattle game on Monday Night Football, it was only the last grievous error in a unprecedented cluster of horrendous, unconscionable, and totally unjustifiable series of events that clearly constitute a calamity.

NFL Rules do not define calamity. The rule quite obviously does not contain an allinclusive, exhaustive, or encyclopedic list of situations that trigger your powers. That is, there is no suggestion that the short list of factors actually enumerated are the only situations which justify your intervention, to the exclusion of all else. Myriad fact patterns, and events both unknowable and unforeseeable, can serve as the basis for your intervening to protect the integrity of the Game.

When rules of any kind (statutes, ordinances, administrative rules, constitutional provisions, or constitutional amendments) include terms that are not explicitly defined in the rules, interpretation requires that the terms be accorded their plain and ordinary meaning. The dictionary definition of  ‘calamity’ is:

1. a state of deep distress or misery caused by major misfortune or loss;

2. a disastrous event marked by great loss and lasting distress and suffering

With that definition in mind, it is difficult to imagine any situation, or set of circumstances that has ever been, or will ever be, more of a calamity. The last play of the game has been universally denounced. Unless you make this right, it will smolder in the hearts and minds of thinking people everywhere. It will not only live in infamy as “The Fail Mary” and “The Inaccurate Reception” it may well forever tarnish the integrity of the sport and become an indelible black mark on your legacy as Commissioner of the National Football League (http://www.nola.com/saints/index.ssf/2012/09/roger_goodells_legacy_always_w.html)

On Monday, September 24, 2012, on Monday Night Football, the Green Bay Packers defeated the Seattle Seahawks. After fifty-nine (59) minutes and fifty-two (52) seconds, the Packers led by five (5) points with eight (8) seconds left in regulation, and the Seahawks were facing fourth and long. As time expired, replacement officials failed to call perhaps the most blatant offensive pass interference (OPI) that was never flagged. The foul was visible with the naked eye from the nosebleed seats, and tens of millions of people – not just sports fans – have seen it replayed ad nauseum – on big screens – in high definition. Seahawk’s Golden Tate used both hands to shove Sam Shields in the back, pushing him to the ground. Side Judge Lance Easley had a clear, unobstructed view of the foul, but did nothing.

Easley then called a simultaneous catch by Green Bay’s M.D. Jennings and Tate, despite clear evidence on replay that Jennings jumped at least a foot higher than Tate, who had just finished fouling Shields and only managed to get a hand on the ball. The only thing Tate actually caught was M.D. Jennings on the way to the ground. The blown calls, faulty rule interpretations, and failed Instant Replay, gave the Seahawks seven (7) points they did not earn or deserve.

There is conclusive, irrefutable, compelling, and overwhelming video and still photographic evidence that it was not a simultaneous catch / possession. Inexplicably, neither instant replay nor subsequent further review resulted in reversal of the erroneous call. The play has been analyzed repeatedly, but perhaps best by Steve Mariucci (hereafter the “Mariucci analysis”) (http://www.nfl.com/videos/nfl-network-total-access/0ap2000000066003/Mariuccianalyzes-final-Seahawks-play).

The danger in focusing only on the last play is simply this: The Fail Mary was so spectacularly wrong, it may overwhelm and conceal the other egregious errors committed in an unprecedented situation, unique circumstances that may never be repeated. The Fail Mary was only the last error, and, while perhaps the worst of all, it should not limit or define your inquiry.

Leading up to the Fail Mary, which has been universally condemned as utterly and disastrously wrong for multiple reasons, the Packers overcame multiple adverse calls and beat the Seahawks, the crowd, the 12th man, and the replacement officials for 59 min and 52 seconds. Replacement officials committed multiple errors on the final play of the game, but a host of other mistakes and failures were committed in the eight (8) minutes leading up to that final play.

A partial list of factors distinguishing the Packers – Seahawks battle from other games that may have been influenced by one or more bad calls follows. Review of this list makes it abundantly clear: based upon the totality of the circumstances, the outcome of the game was the direct result of a series of errors, and a set of conditions, that can fairly be described as a “calamity”:

2. Lance Easley was dismissed from a Division I college refereeing school and the instructor is now on record: Easley wasn’t even qualified for Division I in the NCAA (http://www.dailymail.co.uk/news/article-2208729/NFL-Referee-botched-banker-unqualifiedwork-NFL-level.html)

3. The NFL knew or should have known that Easley had zero experience, and was not just inexperienced, but inept… he was an NCAA Division I reject; (“NFL Commissioner Roger Goodell should never have let a guy with Easley’s lack of experience anywhere near a football field. If Easley wanted to work a professional football game, they should have given him a tray of beers and a vendor’s cap. So, shame on Goddell for putting Easley in a position to blow a call in the first place.” (Jeff Wagner, Wagner on the Web, News Radio 620 WTMJ, Milwaukee, WI
(http://www.620wtmj.com/blogs/jeffwagner/171621171.html)

4. The NFL is solely responsible for the factors in ¶¶ 1 – 2., and clearly negligent as
set forth in ¶ 3, above;

5. Multiple calls were blown in the last 8:44 (more fully detailed, below)

a. Defensive pass interference was called on Sam Shields;
b. Roughing the passer was called on Eric Walden;
c. Replacement officials failed to flag OPI on Tate

6. The Fail Mary that followed was botched by the replacement and replay officials in several ways. A detailed description of the calamity that befell the Packers follows:

At 8:36 left in the 4th quarter, Packers safety Jerron McMillian intercepted a pass, and as replay clearly shows, came down with both feet inbounds. Linebacker Erik Walden was penalized for a 15-yard roughing the passer penalty that incorrectly negated the turnover. The hit was neither late nor violent. (http://www.youtube.com/watch?v=5nWffdZo7Zg)

At 6:22 left in the game on a 1st and 20, Seahawks wide receiver Ben Obamanu was flagged for a 10-yard holding penalty but only five yards were walked off.

At 6:10 left in the game, on the very next play, Packers cornerback Sam Shields was flagged for a 32-yard defensive pass interference penalty despite having inside position, playing the ball, and being grabbed and facemasked from behind by Seahawks wide receiver Sidney Rice while the ball was in the air (http://i.imgur.com/z8QTl.jpg)

On the final play, as both the NFL and Golden Tate have now acknowledged, Tate got away with a blatant push off (http://www.nydailynews.com/sports/football/golden-tate-admits-apenalty-sam shields-seahawks-wide-receiver-twitter-account-flooded-nasty-stuff-controversialtouchdown-packers-article-1.1169518).  This penalty, if called, would have ended the game in a Packers win.

Packers safety M.D. Jennings out-jumped Tate and caught the ball at least a foot above
Tate’s outstretched hand, Jennings had initial possession and maintained sole possession
throughout the play, in the air, on the way down, and on the ground (see Mariucci analysis)

The game should have ended on the blatant OPI, and the Packers should have been awarded a touchback and the victory. Video replay demonstrated, and the Seahawks wide receiver has subsequently admitted, that he committed a penalty, but was not flagged, and he did not have simultaneous possession of the ball.

Conclusion
These factors, taken together, represent a “calamity” pursuant to NFL Rule 17, Section 2, Article 1. The negligent hiring of Lance Easley, the multitude of catastrophic mistakes on the part of the replacement officials, including two overruled turnovers, an erroneous 32-yard penalty, and a holding call walked off inappropriately, together with multiple errors on the Fail Mary, lead inexorably to but one conclusion: based on the totality of the circumstances, the replacement officials’ series of errors clearly constitutes a “calamity” and handed an unearned victory to the Seattle Seahawks.

Commissioner, you, have the sole authority to right this wrong. The integrity of the Game has taken a beating and will remain suspect if this unjust result is allowed to stand. Packer Nation and right-minded sports fans everywhere speak with one voice: Commissioner, Do Your Duty.