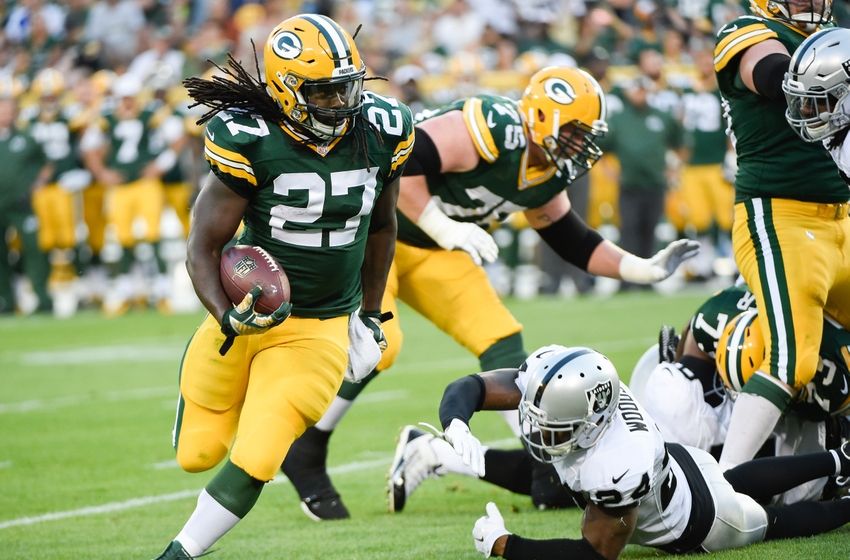 On behalf of the staff, welcome to the first live article on Five Yard Slant, a website dedicated to covering the National Football League and, from time to time, other sporting ventures.  Over the next few days we will be rolling out season previews for the four teams in the NFC North.  From there, we plan on writing and issuing articles on the NFL on a regular schedule.  Should you have any interest in joining the team, please inquire by writing to contact@fiveyardslant.com. Otherwise, enjoy the article, and we hope to see you here in the near future and beyond.
On to the Green Bay Packers Preview…

After a nice start to the Green Bay Packers 2013 campaign, things were soon derailed after starting quarterback Aaron Rodgers went down with a broken collarbone. With the loss of Rodgers, the Packers quickly began to move towards a run first offense, for the first time since Rodgers became a staple in the offense. The focus on the run helped running back Eddie Lacy mature into an NFL feature back.  Lacy’s emergence and a healthy Rodgers will cause nightmares for defenses in the 2014 season.

The offense won’t go without feeling some affects of the NFL offseason. Wide receiver James Jones parted ways via free agency when he joined the Oakland Raiders. Wide receiver turnover is nothing new for quarterback Aaron Rodgers though.  After losses of Greg Jennings (Vikings) in 2013 and Donald Driver (retirement) in 2012, Rodgers will be looking at another new group in the Packers’ 3+ wide receiver sets.  The loss of tight end Jermichael Finley (injury) complicates matters further, as Rodgers must now look to a young group of replacements to make up for lost production.

The first team offense has looked strong during the preseason, and while it is dangerous to rely too much on those performances in predicting the future, all signs suggest the Packers offense will continue as one of the NFL’s best units.  If center Corey Linsley – a rookie destined to spend his first year in a backup role prior to the recent injury of JC Tretter – can handle the load, the Packers are looking to run 70-plus plays per-game.  Given the team’s historical offensive efficiency, those prospects are sure to put the league on notice.  This will be especially true if the Packers are able to make serious headway in week 1 against the defending Super Bowl Champion Seattle Seahawks and their sublime defense.

Following suit with the other NFC North division teams, the Green Bay Packers defense was more of a burden instead of a blessing. With poor pass defense, a lack of pass rush, and an overall inability to get a stop, the defense slid to the bottom of the league for the third consecutive season. It has been hard to tell whether the Packers poor defensive outings are due mostly to coaching, personnel, injuries, or a combination of the three, but one thing is certain, in order to become a dominate force in the league once again the defense must change this season.

The addition of free agent, defensive end turned outside linebacker, Julius Peppers should help to generate that pass rush the Packers have been looking for opposite linebacker Clay Matthews since he entered the league. Having a threat on the opposite edge should free up some of the double and triple teams Matthews has had to deal with the last couple of seasons.  Although Peppers isn’t as young as he once was, had he been on the 2013 Packers he would have led the team with sacks.  So any boost at this point is a major bonus for a team struggling to get the opposing quarterback into the dirt.

With the return of healthy cornerback Casey Hayward, a complete overhaul of the Packers safeties, and some resemblance of a pass rush, the Packers defense has no where to go but up. Playing in a pass happy division and an equally pass happy NFC South makes the pass defense a crucial staple of the 2014 team. With the Packers always high powered offense with Rodgers at the helm, the defense just needs to be average at best to have a real shot to make a playoff push.

Some might say the defense, since it has been so dismal the last couple years, but in reality it is the continued success of the newly found Packers run game. All-Pro running back Eddie Lacy’s progress in year two is going to be imperative to not only ensure Aaron Rodgers can stay healthy, but also helps play keep away from the opposing offenses.