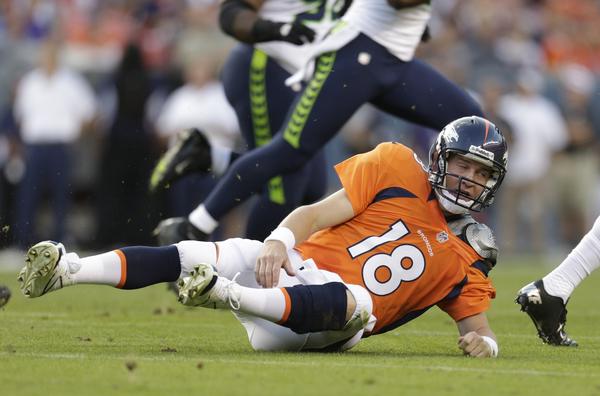 The Denver Broncos won the AFC West in 2014 with a 12-4 record. Peyton Manning led Denver to an 8-0 home record and 4-4 away record losing at Seattle, at New England, at Cincinnati and at St. Louis. The Broncos beat the Dolphins, Colts, Bills, Cardinals and 49ers at home and swept the entire AFC West. The Colts got revenge in Denver in the playoffs in the divisional round which cost head coach John Fox his job.

The Broncos were 2nd in points scored in 2015 with a tally of 30.1 PPG. Manning had another great season notching 66.2 completion percentage, 39 TDs and 15 interceptions. He was sacked only 17 times and pressured only 21.5% of his drop backs (best in league).

The Broncos will have a tough time repeating their offensive performance losing their top TE in Julius Thomas (12 TDs) to free agency in Jacksonville and 3rd WR Wes Welker to concussions. Major changes were made on the offensive line with left guard Orlando Franklin lost in free agency to the rival Chargers, Manuel Ramirez (G/C) traded to the Lions, center Will Montgomery (+4.2) lost in free agency to the Bears and pro bowl left tackle Ryan Clady injured in the off-season. Clady should miss the entire 2015 season with a torn ACL in May 2015 at OTAs.

On defense, the Broncos allowed 22.1 PPG which was 16th in the league. The Broncos run defense was strong while allowing only 3.7 YPC (2nd in league). They forced 25 turnovers and sacked the opposing QB 41 times (9th). Broncos lose DT Terrence Knighton, which hurts their run defense (+11.2), but add rookie Shane Ray to a great OLB mix already stacked with Demarcus Ware and Von Miller. The Broncos will bring pressure in their new 3-4 and should have a good defense again in 2015 to help Manning.

Manning may have lost Welker and Julius Thomas this off-season but still has plenty of weapons. The great combination of WR Demaryius Thomas (franchised) and Emmanuel Sanders at WR is a deadly mix. Thomas had 1,619 yards and 11 TDS and Sanders snatched 1,404 yards and 9 TDs. It is a deadly one two punch with Manning providing them the ball. The Broncos have 2nd round pick from 2014, Cody Lattimer, developing into then number 3 WR role and added tight end Owen Daniels to fill some of the void from the loss of Julius Thomas. Daniels followed Kubiak from Houston to Baltimore and now Denver. Virgil Green could develop at tight end as well and Jeff Heuerman was drafted in Round 3 in 2015. However, Heuerman tore his ACL in OTAs and will the miss the entire 2015 season. The Broncos have plenty of weapons still for Manning between Thomas (in a contract year), Sanders, Lattimore and Daniels.

The Broncos ran the ball well with CJ Anderson and should get a boost with the zone blocking scheme of Gary Kubiak. Kubiak made the most out of Justin Forsett with a 5.2 YPC season in Baltimore in 2014. Anderson and former 1st round pick Montee Ball have a chance to succeed in this scheme with the defensive focus on stopping Manning from passing the ball. The new offensive line must transition well to this scheme for real production to match 2014 (4.4 YPC).

The Broncos are loaded with pass rushers for 2015. They had 41 sacks, 60 QB hits and 197 hurries in 2014 combined. Shane Ray was added in Round 1 and Phillips’ should get the most out of Miller and Ware. Malik Jackson, a pass rushing 3-4 defensive end, can provide some solid pass rush. However, Wolfe and Sylvester Williams don’t offer much pass rush on the defensive line. Inside linebacker Brandon Marshall was successful blitzing in 2014 and is strong in run defense. The Broncos will attack the quarterback and it’s surprising given their run defense, pass rush and coverage in 2014 that they allowed 22.1 PPG. The points allowed didn’t match the production.

The Broncos have three good corners and solid safeties. Chris Harris brings a whopping +27.2 coverage grade and Aqib Talib is a true number 1 corner (+2.8 coverage rating). Second year corner Bradley Robey (2014 1st round pick) developed over time as a rookie in 2014 and should make a jump in year 2. TJ Ward is a strong in run defense (+3.1) but struggled in coverage (-7.2 coverage grade). Free safety Darrien Stewart is a down grade at safety from Rahim Moore who bolted to Houston in the off-season.

The Broncos lost a lot of talent on their offensive line due to free agency and injuries. If Peyton Manning isn’t protected, the Broncos will lose their edge on offense. The Broncos will need some Gary Kubiak offensive line magic to protect Manning with rookie 2nd round pick Ty Sambrailo at left tackle, veterans Chris Clark (who was benched at right tackle in 2014) and new left guard in Ben Garland. Louis Vazquez returns to right guard from right tackle and Gino Gradkowksi or 4th round pick Max Garcia will battle for the center spot in Kubiak’s zone blocking scheme. The Broncos have major question on the offensive line but Kubiak’s scheme and Manning’s quick release could save them. Montgomery and Ramirez weren’t successful before playing with Manning, Chris Clark has had success in past seasons and the rookie Sambrailo has some talent for a 2nd round pick. Franklin is the biggest loss as he is a good left guard that went to a rival.

Malik Jackson is a good player but Sylvester Williams is not a good pass rusher or run defender. Williams will need to step up at nose tackle. Derek Wolfe is good against the run but struggles rushing the passer. The Broncos defensive line won’t generate much pressure but needs to occupy blockers in the 3-4 scheme so Ware, Miller, Ray and Marshall can do the damage.

The Broncos travel to Detroit for a Week 3 Sunday night football matchup. The Broncos also head to Chicago for a Week 11 matchup against their former head coach, John Fox, now with the Chicago Bears. The Broncos host the Packers Week 8 on Sunday Night Football following the Broncos’ bye. The Vikings travel to Denver for a Week 4 matchup.

Denver is a perennial playoff team as long as Peyton Manning is the Broncos’ QB. However, they have made some sweeping changes for 2015 with a new coaching staff, two lost weapons, new defensive scheme and downgraded offensive line. Denver should have a very strong defense and be able to score points with Manning, his remaining weapons and run support. Broncos have a better chance to win in Denver against the Packers/Vikings but will provide a tough matchup in Detroit and Chicago.