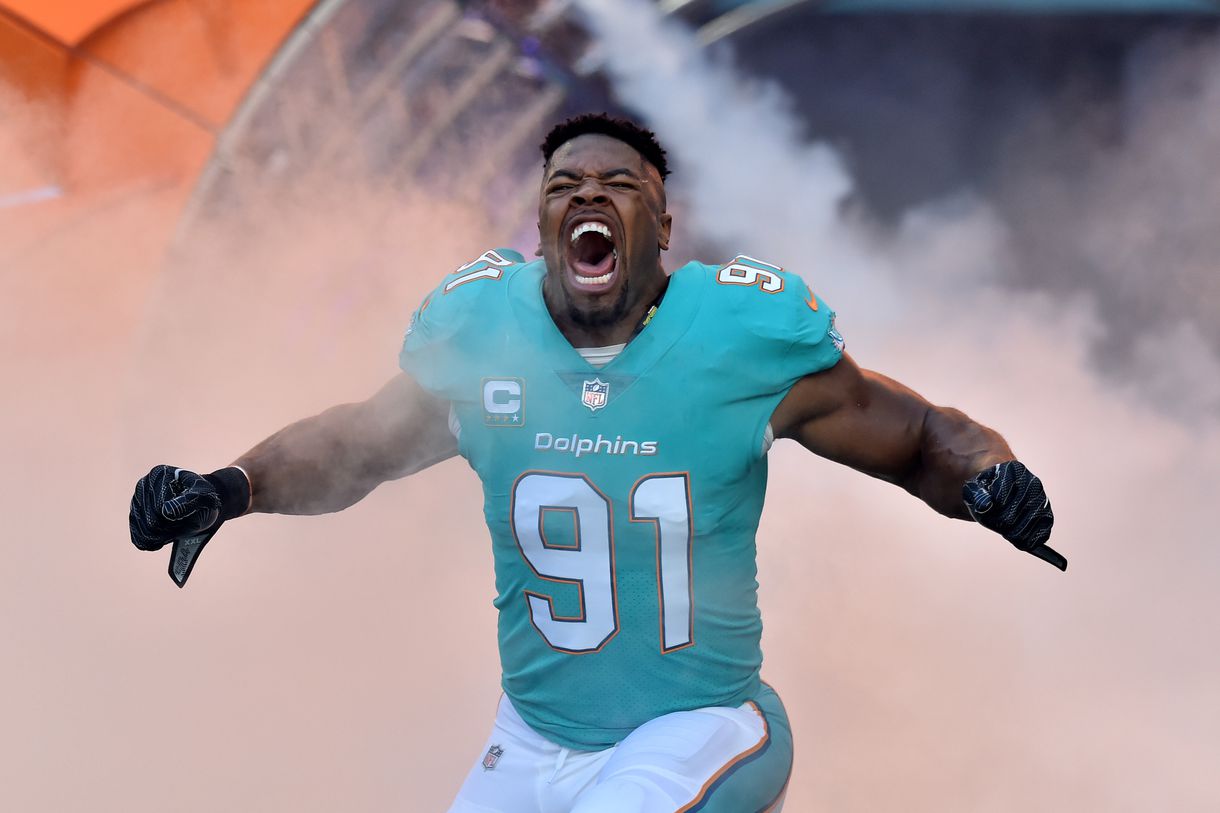 The Dolphins had a rough year in 2017 under  head coach Adam Gase. Ryan Tannehill was injured in the summer and the Dolphins turned to Jay Cutler to save them. He did not. Miami finished 6-10 going 4-4 at home and 2-6 on the road as Ray Finkle missed kick after kick. LACES OUT DAN!! Tannehill returns to lead the Dolphins and try to get them back to the playoffs similar to the 2016 season.

The Dolphins might/may have despite losing Ndmakong Suh as a cap casualty. LOL Dolphins for that contract. Cameron Wake is still a menace and the Phins added Robert Quinn from the Ram. Quinn’s a Phin. These two can provide a nice rush and William Hayes and Andre Branch can be solid backups at DE. Stephone Anthony joins the Dolphins from the Saints and will be the pass rushing SAM LB.

Jordan Phillips and Davon Godchaux don’t offer must pass rush at DT but can be run stuffers. Miami traded a late round pick for Akeem Spence to be the 3rd DT. The Dolphins will miss Suh.

As mentioned, Stephone Anthony is the new SAM and Kiko Alonso is a sturdy weakside linebacker. Raekwon McMillan was injured his rookie season but the second round pick from 2017 will be the Dolphins Mike LB. Jerome Baker was drafted in Round 3 to round out the LB corps.

Miami lost Jarvis Landry who got a huge contract from the Browns. However, DeVante Parker, Kenny Stills and Danny Amendola is a nice receving group. Albert Wilson was added from the Chiefs in free agency. Leonte Caroo is an underrated 3rd round pick from 2016. Amendola joins from the hated Patriots. Mike Gesicki is a great jump ball tight end picked in Round 2 from Penn State. Tannehill still has plenty of weapons.

Jay Ajayi was traded last season and the Dolphins turn to Frank Gore as their workhorse back. Gore is still solid in old age but lost a little bit from his days with the Colts. Kenyan Drake and rookie Kalen Ballage (Round 4) have some potential though.

The Dolphins are expecting big things from young cornerbacks. Cordrea Tankersley and Xavein Howard are 3rd and 2nd round picks respectively from 2017 and 2016 respectively. Minkah Fitzpatrick was selected in Round 1 in 2018 to be the nickel/safety combo for the Dolphins. Tony Lippett continues to switch to DB from WR in college. Reshad Jones is a solid strong safety and TJ McDonald is added from the Rams at free safety. The Dolphins are young but have potential to grow in the secondary.

Tannehill is solid but coming off a major injury. He is a questionmark until proven otherwise. Tannehill had a 93.5 rating in 2016 with only 19 TDs and 12 interceptions. Tannehill must step into the franchise QB role under Adam Gase.

The Dolphins are young with bookend first round tackles in Laremy “Gas Mask” Tunsil and Ja’Wuan James. Josh Sitton joins the Dolphins after the Bears cut him. Sitton reunites with Gase. Daniel Kilgore and Jesse Davis are the questionmarks at center and right guard for Miami.

Miami hosts the Bears and Lions in Week 6 and 7 in 2018. The Dolphins travel to Green Bay in Week 10 and to Minnesota in Week 15. Miami is a weaker than all but the Bears but shouldn’t be slept on during 2018 if Tannehill takes the next step in his career. Dolphins fans have been waiting for that for awhile now.