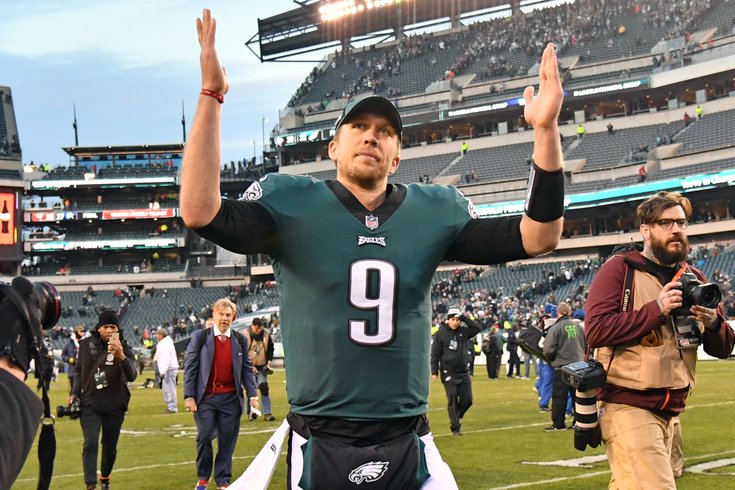 The Philadelphia Eagles made the wild card in 2018 at 9-7. They beat the Bears on a beautiful doink by Cody Parkey off the uprights. This Eagles team won the Super Bowl the season before. This new squad may be as good as that Super Bowl team. Dough Pederson returns at head coach and will call the plays. Jim Schwartz leads the fearsome Eagles defense.

The Eagles defensive line has an embarrassment of riches. Fletcher Cox is such a monster and Malik Jackson was added in free agency after the Jaguars cut him. Brandon Graham re-signed this offseason and generates a ton of pressure. First round pick 2017 Derek Barnett is coming into his own at DE. Vince Curry returns to Philadelphia after failing on a big contract with Tampa Bay. Shareef Miller is a fast DE drafted in Round 4 out of Penn State. Hassan Ridgeway was traded from the Colts and Timmy Jernigan was cut and re-signed. Both are very good defensive tackle depth. The Eagles will generate pressure with their front 4.

The Eagles might have more weapons than stud defensive linemen. Alshon Jeffre (843 yards and 6 TDs in 13 games) is their number 1 and Zach Ertz (1,163 yards and 8 TDs) is Carson Wenz’s favorite target at tight end. Nelson Algohor mans the slot with 736 yards and 4 TDs. Dallas Goedert is a solid back up tight end in his second season after 334 yards and 4 TDS in his rookie year. DeSean Jackson returns from Philly from a trade from Tampa Bay. This gives the Eagles a great deep threat. JJ Arcega Whiteside was drafted in Round 2 out of Stanford and Mack Hollins provides good depth. Wentz will air it out in 2019.

The Eagles have a good offensive line. Jason Peters is a good LT and stalwart for the Eagles. Jason Kelce returns and is a strong center. Lane Johnson is a beast at right tackle. Brandon Brooks is a good gurad but recovering from an ACL injury. Isaas Seamulo is solid left guard and rookie 1st round pick Andre Dillard provides great depth at tackle. Hala Vaitai is experienced tackle depth too. Stephen Wiseniewski is average interior and center depth.

Carson Wentz (3,074 yards 21 TDs and 7 ints in 11 games) is a good QB . Wentz earned a huge deal with the Eagles despite his injury history the last two seasons (knee and back). Nick Foles finally hit free agency (Jacksonville) and no longer is the greatest backup QB in the league. Nate Sudfield and rookie 5th round pick Clayton Thorson will have to do their best Nick Foles impression.

The Eagles traded for Bears work horse Jordan Howard. Howard is in a contract year and should be the bell cow for the Eagles. Miles Sanders is s shifty but powerful back drafted in Round 2 out of Penn State. Darren Sproles returns for one last season and Corey Clement is a good 4th back. The Eagles will have success running the ball in 2019.

LB is average and Nigel Bradham is a solid Will LB. Jordan Hicks left in free agency leaving Zach Brown and LJ Fort as the new possible MIKE LBs. Kamu Grugier-Hill is a solid young SAM LB but Paul Worrilow is not a good backup. The Eagles might have trouble at LB.

Rodney McLeod and Malcolm Jenkins is a great safety combo. McLeod had some injury issues in 2018. Ronald Darby is a solid number 1 CB but is recovering from a long term injury too. Sidney Jones and Jalen Mills will need to step up at CB2 and slot CB. Rasul Douglas is still a young corner from Round 3 in 2017 out of WVU. Cre’Veon LeBlanc was a late waiver wire addition that did well. Andrew Senedejo comes from the Vikings after they cut him to add solid safety depth. Tre Sullivan was suprising depth in 2018 too. The Eagles will succeed with pass rush but their young secondary needs to get healthy and grow.

Eagles went 5-3 at home and 4-4 on the road in 2018. The Eagles host Detroit in Week 3 and the Bears in Week 9. Philadelphia travels to Green Bay in Week 4 (Thursday night) and Minnesota Week 6. The Eagles might be the toughest test for all four North teams in 2019. They have very little weaknesses and extra strong strengths. Good offensive line play will be huge against the Eagles.