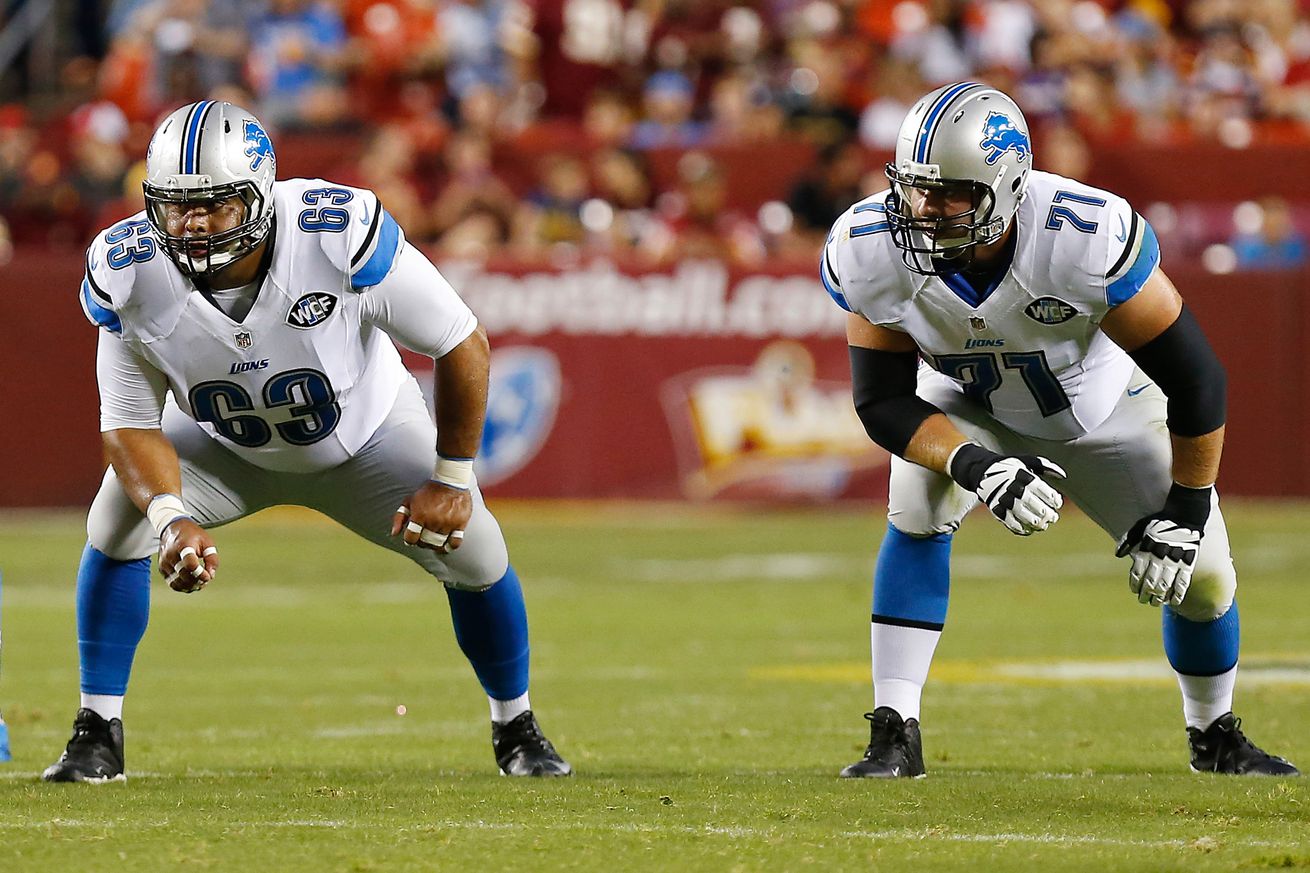 Now that free agency is over and most of the draft picks are signed, we can turn our attention to players in contract years for 2016. All four NFC North teams have some cap space and have plenty of players they could sign before their contract expires.

The Lions have 13.5 million in cap space under the top 51 rule. The Lions will most likely have 11.5 million in carry over after the top 53 and practice squad players take effect. Detroit will have plenty of space to sign some players that will become free agents in 2017. Let’s take a look at the players and potential contracts.

Slay is on the 4th year of his 2nd round pick deal from 2013. Slay has turned into a big time shut down number 1 CB. He has played well in 2014 and great in 2015. Cornerback money is expensive and Darius Slay added Drew Rosenhaus as his agent to cash in. Slay could be franchised in 2017 (13.952 million+) if a deal isn’t reached before March 2017. The Lions have plenty of cap room for a franchise tag for Slay with only $119 million cap committed for 2016 and some carryover to 2017.

Based on current CB contracts, 13-14 million is in play for Darius Slay with an extension. Quinn is a new GM and may not value Slay that high until he seems in in action in person.

The Lions found a good receiving running back in 2013 in the 6th round. Riddick had 80 receptions in 2015 and is a big time playmaker in the underneath passing game. Riddick has good hands and agility but hasn’t produced in the run game (3.1 YPC). Riddick could earn a Darren Sproles type contract for his next deal. Three year deal for 12 million could be in play for the younger Riddick as a receiving RB with special team coverage ability.

Reiff is playing on a 5th year option in 2016. The Lions drafted Taylor Decker and we will see if Reiff remains at left tackle in 2016. However, the Lions could sign Reiff long term to have book end tackles for many years. Signing Reiff could possibly reduce his 2016 cap number (8.070 million). The Lions may have to spend 9-11 million per season if Reiff wants left tackle or top right tackle money. We’ll see if Quinn thinks Reiff can be the future at either tackle spot.

Taylor played more snaps than starter Jason Jones in 2015. Taylor was solid in run defense and had 7 sacks in 2015. Taylor probably has one more prove it year in 2016 on the last year of his rookie deal. Taylor showed flashes as a rookie but struggled in 2014. However, the Lions could take a risk and probably get Taylor cheaper now if he signs before he has another 7 sack year. Given the importance of DEs, Taylor could be in the 5-7 million per year range. My bet is the Lions wait on Taylor to produce in 2016.

Martin is a good punter and on a cheap contract as a 5th round pick from 2013. This is the last year of his deal. The Lions have the room to lock up Martin long term. Martin should be earning in the range of 3.3 million per season or more based on punter contracts.

Warford had a great rookie season (2013) and good 2014 season for Detroit. Warford regressed in 2015 due to an ankle injury and problems in Joe Lombardi’s scheme. However, Warford did much better in the second half of the season under Jim Bob Cooter. Warford fits Jim Bob Cooter’s power run scheme and the Lions need to run well with him at right guard. The Lions could extend Warford now but he would have a significant jump in cap hit from his rookie 3rd round deal. The Lions might wait and give Warford a deal before free agency opens in 2017.

8 million per season seems to be the going rate for good guards. We’ll see if the Lions value Warford highly as a power run blocker only. Extending Warford during the season is a better bet than during the summer.

The Packers have some cap room this year but have a lot committed for 2017 with a considerable number of free agents. Packers have 10.2 million but must sign some more draft picks and get to top 53/PS players on board. Green Bay should have around 8 million in extra room. Green Bay has 142 million committed for 2017 not including their first round pick in Kenny Clark. Green Bay may want to carry over their extra 2016 space but they could sign some players this summer or during the season.

7 million per season is definitely in play for the Lacy even with his struggles.

Sitton has been a top 5 guard in the league for years. The only factor against Sitton is his age. Sitton turns 30 in June and Thompson might not want to give an older player big time money (though he did with Peppers). Sitton is likely to take a home town discount after getting a big deal on his second contract with Green Bay (5 years 33.7 million). Good guards get 8 per in free agency now though. We’ll see if Sitton will get less than that due to age. Sitton is worth 8 million per season even at 30 but Thompson may feel otherwise. 6 million per season is a good guess for a Sitton extension.

Lang is another top 10 guard in the league the last two seasons. Lang has improved every year and will be 29 in September. Both Packers’ guards need new contracts and Sitton is the better guard (though a year older). However, Lang is likely willing to give a hometown discount as well after a good sized contract on his second deal too (4 years 20.8 million). Lang has played well and another 5 million per season deal is in the cards for him.

Tretter proved to be a very good backup center and tackle in 2015. He had injury issues early. Tretter will surely want a pay raise from a rookie 4th round deal. Tretter may also want to start. If Sitton or Lang are retained, Tretter may want to play elsewhere. Green Bay would be smart to lock up Tretter now on a good sized deal for a backup. If Tretter wants starter money, Green Bay will have a tougher choice to make.

The Packers declined Jones’ 5th year option (6.75 million). Green Bay may go the route of Nick Perry and try to get Jones on a cheaper one year deal. A long term extension is possible but Jones may bet on himself and try to get a bigger pay day in 2017 with a good 2016 season. The Packers get some cap space with Julius Peppers expiring contract but Green Bay may want to keep Peppers for one more year in 2017.

Perry resigned on a one year prove it deal for 2016 at 4.875 million. Perry must have a big year to try and replace Julius Peppers. The Packers drafted Kyle Fackrell at OLB in Round 3 and have Clay Matthews. Perry has a lot to prove in 2016 but won’t get a new deal unless he is very good during the season.

Peppers is on the last year of his three year deal signed in 2014. He has a big cap number coming off the books after this season (10.5 million) but the Packers have 142 million committed already for 2017 even after Peppers contract is off the books. Peppers should have plenty left in his tank despite being 36/37.

We’ll see if he re-signs a new deal at a cheaper rate for one more season after 2016. He could extend now and try to lower his current cap hit and allow the Packers to carry more over to 2017. However, it appears Green Bay will just let Peppers play out his contract for 2016.

The Vikings have 9.8 million and still have to sign some of their draft class. They should have around 7.8 million with the top 53 and practice squad. Minnesota is somewhat limited but could extend a few players. Extending Matt Kalil could actually lower his cap number but would be risky given his play in 2013-2015.

Kalil is playing on the 5th year option in 2016 (11.096 million). He is a starting left tackle but struggled from 2013-2015 after a good rookie year in 2012. This is a big prove it year for Kalil. The Vikings would be wise to wait to sign him until Kalil proves he can be a better left tackle. This wait could be costly though as young left tackles can cost a good amount of money. If Kalil proves he can play, the Vikings will have to give him a good sized contract.

10-12 per year could be the cost of waiting based on other tackle contracts.

Harrison Smith becomes a free agent in 2017. Smith is a key member of the Vikings defense and a top 3 safety in the league. Smith will be costly but the Vikings would be wise to lock him up long term. The franchise tag for a safety isn’t too bad (approx. 10 million) but having Smith for more than one year is desirable.

10 per is probably the starting point for Harrison Smith based on Earl Thomas and Eric Berry deals.

Munnerlyn has helped the Vikings defense rebound in the nickel spot after two good seasons in 2014/2015. Munnerlyn got a 3 year 11.25 million deal but will be 29 in 2017. The Vikings drafted Trae Waynes and Mackensie Alexander in back to back drafts in Round 1 and 2, respectively. The Vikings might make a youth movement with cheaper and younger CBs. This could be Munnerlyn’s last year in Minnesota despite 3 potential good years.

Smith just signed a one year 3.5 million dollar deal during free agency. He won’t be extended before the season but if he plays well and wins the right tackle job over Loadholt, he could get a long term deal during the season. Smith is 29 and a good run blocker.

Loadholdt is recovering from a torn Achilles from the summer of 2015. Loadholdt is playing the last year of a big deal and took a pay cut to stay with the Vikings this season. Minnesota may extend him during the season if he proves he is healthy and back to solid form. He is a good run blocker but lacks in pass protection.

The Vikings punter is a free agent. Much like Sam Martin, the Vikings could try to lock up their young punter to a long term deal before he flirts with free agency.

The Bears have the most cap space currently (this could change if Lions cut Tulloch). The Bears have 24.8 million and space and realistically around 20 million after all picks are signed and the top 53 rule. The Bears don’t have many players that are free agents in 2017.

Jeffery is playing on a franchise tag of 14.599 million in 2016. The Bear want to lock him up long term and have the space to keep him. A long term deal might actually lower his 2016 cap number.

Based on current contracts, 13-15 million per year is the range for a new Jeffrey deal.

The Bears signed Young in 2014 and he has been solid for the Bears. The Bears just drafted Leonard Floyd and already have Pernell McPhee and Lamar Houston on big deals. The Bears probably wait for Young to play out his deal and try to bring him back before free agency in 2017 if he has a good 2016 season.

There are many potential free agents to sign early. The Lions and Bears have the most space. The Packers have the least space and the most amount of people to sign (potential cap hell). The Vikings have some big decisions to make on some key players with a decent amount of space. We’ll see if any North GM is active this summer for the future or if they wait and see how 2016 plays out for these contract year players.