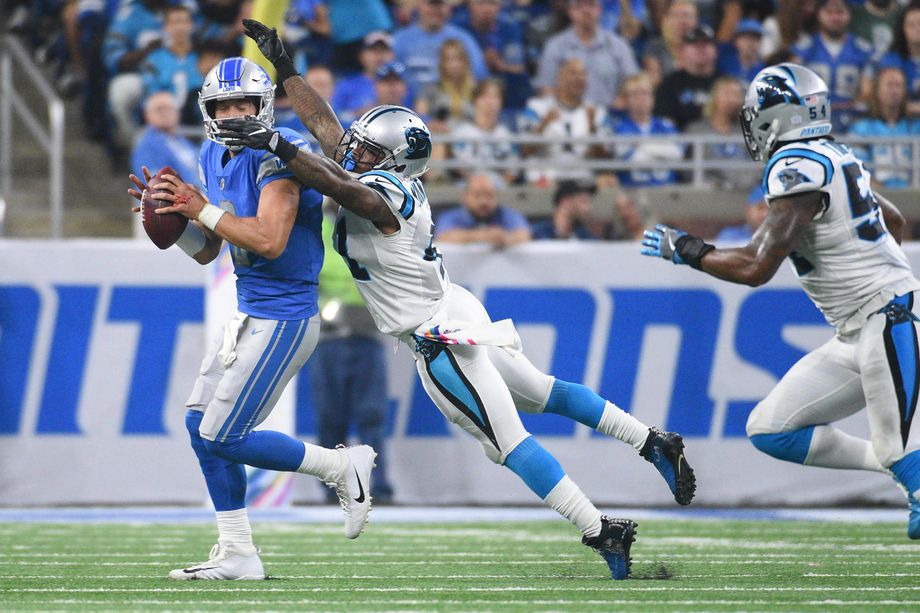 Week 5 is over and the NFC North is getting more competitive. Let’s take a look at the results.

The Lions dropped a crucial game at Ford Field falling to the 4-1 Carolina Panthers by a score of 27-24. Each team was shut down from running the ball but Cam Newton had a second great day in a row (3 TDs and over 300 yards).

Somehow, backup tight end Ed Dickson had 3 big catches and earned 175 yards on the day. Kelvin Benjamin and Delvin Funchess each made tough touchdown catches. Carolina sacked Stafford 6 times and forced one fumble that they recovered for what ended up as the game winning field goal. Stafford injured his thigh and ankle in the game but still had 103 rating with two late TDs. He was battered by the Panthers front 7 in this game and was victimized but two crucial drops including Ebron in the end zone in the first half (cost them 4 points in a 3 point loss).

Carolina led 17-10 at half and scored 10 in the 3rd Quarter with the Benjamin TD and fumble for the field goal. Carolina was up 27-10 and looked in control.

The Lions stormed back late in the 4th Quarter with two Matt Stafford touchdown passes to Darren Fells. Detroit had one last chance at a stop; but Kelvin Benjamin got away with OPI on 3rd down against Darius Slay and grabbed the game clinching first down for the Panthers. Carolina escaped Detroit with a win and the Lions need some answers after their second home loss.

As expected, this game was a shoot-out. Dallas did most of the shooting in the first half with 3 TD drives. The Packers had two but Crosby missed two extra points. Dallas led 21-12 at half.

Green Bay stormed back in the 3rd Quarter with a FG and TD drive. Dallas countered with a field goal drive for the 24-22 lead.

Green Bay finally got some good defense with a Damarius Randall pick 6 of Dak Prescott. The Packers were up 28-24. Dallas was not fazed and had an incredible 17 play 79 yard TD drive knocking 8:43 off the clock. The Cowboys led 31-8 but there was still one minute left for the ever dangerous Rodgers.

The magic minute ensued with Rodgers finding Adams and then Bennett for 14 yards each. Aaron Jones ran for 15 yards. Rodgers was just about sacked on 3rd and 8 but he made a miracle scramble of 18 yards avoiding David Irving. Finally, Rodgers hit Davante Adams on the perfect back shoulder for the 12 yard TD. Green Bay led 35-31.

The Cowboys had one final chance but after some crazy laterals, the Packers recovered the ball and won the game. Green Bay has won twice in a row in Dallas now. Green Bay took control of the NFC North at 4-1 thanks to more miracles from Aaron Rodgers.

This was an ugly Monday Night game at Soldier Field. Mitch Trubisky made his first career start and looked competent despite no WR help in Chicago. The Viking defense was strong but so was the Bears defense. Sam Bradford did not look healthy and was battered in the first half before ceding to Case Keenum late in the first half. The Bears got a safety when Bradford held the ball over 5 seconds in the end zone and Leonard Floyd sacked him. The Vikings earned a late field goal for the 3-2 lead at half time.

Case Keenum took control in the second half with a TD drive hitting Kyle Rudolph. Minnesota led 10-2. The Bears countered with a decent drive that stalled. However, John Crazy like a Fox countered with a fake punt that scored a TD. The Bears trailed 10-9.

Minnesota continued the scoring flurry with a 58 yard TD run by Jerrick McKinnon to regain the 8 point lead. The Bears moved the ball by running the ball and Vikings penalties. Finally, Trubisky hit Zach Miller for the 20 yard TD. The Bears had a crazy play to convert the 2 pointer and tied the game.