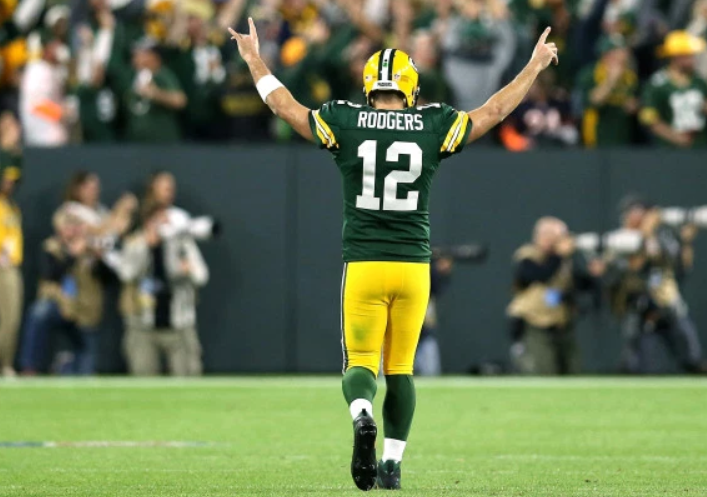 We have tricked and treated and the NFL season is almost half-way complete. The NFC North race is tighter than Nichels in a cat woman costume. Here are the standings through 8 weeks.

There is a huge divisional game this week and a good ole Rodgers/Brady showdown on Sunday Night. Bears get a nice lay-up on the road.

Chicago can beat the bad teams for sure. They get another one this week in Buffalo. Buffalo will be starting Nathan Peterman so you know he will be good for 8 picks. Chicago is banged up at WR (Robinson and Gabriel) and Khalil Mack is injured but they should still win this road game. Mitch Trubisky tosses 300 yards and 3 TDs and if the Bears avoid turnovers they win by double digits.

The Lions are 2-0 at US Bank Stadium. Matt Stafford can be a Viking killer if he is protected. The Vikings are little banged up with injuries to Riley Reiff, Dalvin Cook, Tom Compton and Stefon Diggs on offense. Linval Joseph, Anthony Barr, Andrew Sendejo and Xavier Rhodes are banged up on defense. Some of those players should play which could make it a rough day for Stafford.

The Lions have protected well this year but Taylor Decker and TJ Lang are banged up which would hurt them against the Vikings strong pass rush led by Danielle Hunter. Everson Griffen returning gives them a boost too with his crazy play.

The Lions will have to learn how to play without Golden Tate. They must establish a run game with Kerryon Johnson because short passes with YAC to Tate are no longer an option. Marvin Jones, Kenny Golladay and TJ Jones must step up as well and get open for Stafford and win jump balls too. Stafford is still playing well but had 2 costly turnovers against Seattle to thwart a come-back attempt. The Lions must avoid turnovers on the road in Minnesota.

Cousins has played well this year but has been under pressure. The Lions don’t bring consistent pass rush but they are good at sacking the QB. Will Ziggy Ansah ever play? This would be a good week to do it. Romeo Okwara (5 sacks), Da’Shawn Hand (2 sacks) and Devon Kennard (5 sacks) provide the rush and Snacks Harrison will help stop Dalvin Cook and Latavius Murray in the run game. If Detroit can shut down the run game with decent LB play, they can limit the Vikings offense enough for Stafford to outscore them.

Must win game for both teams. Stafford outshines Cousins and the Lions win on a last second Prater field goal.

Aaron Rodgers versus Bill Belichick and Tommy Brady will be good football to watch. Rodgers can torch anybody but Belichick will have them schemed up. The Patriots are tough to beat in Foxboro and have the firepower to drop 30 on the Packers defense with good execution.

Ha Ha Clinton Dix is gone and Tramon Williams will play some free safety along with Brice/Whitehead. If the Packers run the ball well, they can still a win on the road. The Patriots struggle without Sony Michel running the ball so this leaves the door open for the Packers defense.