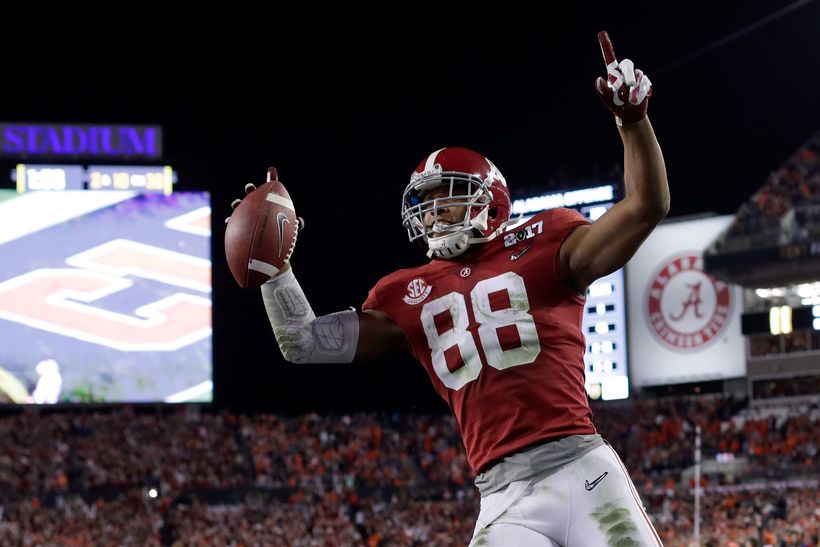 The offseason lumbers on with OTAs and mandatory mini-camps (mandatory OTAS). Let’s turn our attention to college football. Let’s take a look at the upcoming schedules for the top teams in college football in 2017.

Clemson
Clemson won the National Championship by beating Ohio State and Alabama but lose QB DeShaun Watson and WR Mike Williams to the NFL. The Tigers still should be a good team. The ACC is a decent conference but way less of a conference than the SEC or Big Ten recently. Clemson hosts Auburn and is at Louisville in Week 2 and 3, respectively. The Tigers travel to Virginia Tech but host Florida State in ACC play. Clemson just lost way too much fire power on offense. They may be able to keep winning but a down year is more likely with a top 15 finish after losing Watson.

Alabama
Alabama surprisingly didn’t win the National Championship game (won 4 of last 8) and the Crimson Tide team lost a good amount of talent to the NFL. However, the Alabama and Nick Saban usually just reload the team. The Crimson Tide will play Florida State in Dallas in Week 1. They travel to Texas A&M and Auburn but host Ole Miss, Tennessee and LSU in SEC play. Alabama has a great shot to make the NCAA playoff as always.

Ohio State
Urban Meyer always has a playoff caliber team. JT Barrett returns at QB for the Buckeyes. Ohio State lost a lot of their back 7 on defense (Lattimore, Hooker and Conley) and a play maker on offense (Samuel). They are still loaded and will fight for the Big Ten crown with Michigan and Penn State.

The Buckeyes host Oklahoma as the big out of conference game. They must travel to Iowa, Nebraska and Michigan this year but host Penn State and Michigan State. The Buckeyes play a Big Ten game in Week 1 at Indiana. That is an interesting matchup to open the season as the Hoosiers have been a little tougher lately.

Michigan
The Wolverines are a fully revived tough team under coach Jim Harbaugh. The Wolverines lost some weapons (Darboh, Butt) and a good amount of talent on defense (Peppers, Charlton, Glasgow, Lewis). Harbaugh has recruited really well though and returns his QB (Speight) after a two loss season (Iowa and Ohio State). Michigan hosts Ohio State but travels to Penn State in Big Ten East play. Michigan battles Florida in a neutral location in Week 1. Michigan got the short stick and travels to Wisconsin (only top East team to play Wisconsin) but host Michigan State in the battle for the state. Michigan will fight to be Big Ten Champ in a three team race with Penn State and Ohio State in the East division.

Penn State
Penn State returns a ton of players after winning the Big Ten in 2016. QB Trace McSorley and Heisman hopeful RB Saquan Barkley are huge playmakers and finally have a good offensive line at their disposal. Penn State has lots of talent at DT and LB (Cabinda, Farmer, Bowen) with a solid secondary.

The Nittany Lions host Pitt in non-conference which is a weak game for out of conference. However, Pitt won last year which ruined Penn State’s playoff bid. Penn State hosts Michigan and Nebraska but travels to Ohio State, Michigan State, Northwestern and Iowa. Penn State can repeat as the Big Ten Champion but will need to find a way to win some decent road games and beat Michigan at home.
http://www.espn.com/college-football/team/schedule/_/id/213

USC
USC has a stud at QB (Darnold) and should be the favorites in the PAC 12 after beating Penn State in the Rose Bowl. USC hosts Western Michigan, Stanford and Texas to start the season. USC travels to Notre Dame and Colorado but entertain UCLA to end the season. USC will host Utah and do not play Washington unless they meet in the PAC 12 champ game. Sam Darnold is an absolute stud at QB. They lost Adoree Jackson, Ju-Ju Smith Schuster (WR) and their left tackle(Banner) but should still be a good team.
http://www.espn.com/college-football/team/schedule/_/id/30

Washington
Washington made the playoffs but lose John Ross, Kevin King and Sidney Jones. Washington has weak non-conference games and host Oregon, Utah and UCLA .The Huskies travel to Colorado and Stanford this season.
http://www.espn.com/college-football/team/schedule/_/id/264

Wisconsin
The Badgers made the Big Ten Championship game winning a weak Big Ten West but lost to Penn State last year. The Badgers have a weak non-conference schedule with at BYU the toughest game. The Badgers travel to Nebraska, Indiana and Minnesota but host Michigan, Northwestern and Iowa. They do not play Penn State, Ohio State or Michigan State. They have a cupcake schedule and should win the Big Ten West again.
http://www.espn.com/college-football/team/schedule/_/id/275

Florida State
Florida State has a tough year playing Alabama in Week 1 and at Florida to end the season, though Florida should have a down year. The Seminoles host Miami and Louisville but travel to Clemson in the ACC. If the Seminoles lose to Alabama but then win out they could still make the playoffs.
http://www.espn.com/college-football/team/schedule/_/id/213

Louisville
Louisville has a weak non-conference slate. They host Clemson but travel to Florida State. Lamar Jackson is an exciting QB to watch and the reigning Hesiman trophy winner.
http://www.espn.com/college-football/team/schedule/_/id/97

Georgia
The Bulldogs travel to Notre Dame in Week 2. They also play at Tennessee, at Auburn and at Georgia Tech in the rivalry game. Of course, they play Florida in Jacksonville and host many weaker SEC teams in Athens this season. They’ll probably lead 28-3 then lose.
http://www.espn.com/college-football/team/schedule/_/id/61

Oklahoma
Bob Stoops retired but the Sooners could still win the Big 12. Oklahoma travels to Ohio State, Baylor, Oklahoma State. They play Texas at a neutral site in the Red River rivalry and host TCU and West Virginia. Oklahoma are typically the Big 12 favorites.
http://www.espn.com/college-football/team/schedule/_/id/201

Oklahoma State
The Cowboys are at Pitt in non-conference as their toughest non-conference game. The Cowboys travel to Texas and West Virginia but host the Sooners and TCU.
http://www.espn.com/college-football/team/schedule/_/id/197

LSU
Les Miles was fired last year and Ed Orgeron is the full time head coach now after going 5-2 as interim coach. The Tigers have a really weak non-conference schedule before SEC play. LSU hosts Auburn and Texas A&M but travel to Florida, Alabama, Tennessee and Ole Miss. The Tigers should have 3 to 4 losses in a tough SEC.
http://www.espn.com/college-football/team/schedule/_/id/99

Others
Florida, South Florida, Miami, Virginia Tech, Colorado, UCLA, West Virginia, Auburn, and Utah could make the jump into the top 10 with some surprises as they finished in the top 25 last year. Florida lost some big time defenders in Tabor and Davis. Auburn is good every once in a while. Utah and UCLA seem to always flirt with being good but fall apart in three to four games. South Florida came on strong last year in the AAC conference. Miami lost their QB in Brad Kaaya but has a decent team. The Hokies could do some damage in ACC with a big matchup Week 1 against West Virginia. Colorado lost some good CBs but should have a good offense.

Texas A&M, Western Michigan, Texas, TCU, Houston, Tulsa, Pitt, Iowa, Minnesota, Washington State, Temple, Oregon could be top 25 teams in 2017. Pitt lost their QB and James Conner to the NFL. Western Michigan was a nice surprise but they should regress losing Corey Davis(WR) and Taylor Moton (LT). Western Michigan is at USC and at Michigan State to start the year. Will Texas and Oregon ever rebound into powerhouses?

It should be a fun year of college football with lots of big matchups.