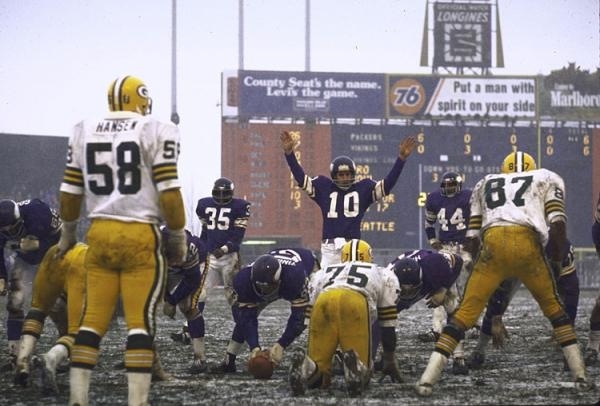 The Green Bay Packers head to Minneapolis to take on the Minnesota Vikings at TCF Bank Stadium.  This once-great border battle has been dominated by Green Bay in recent seasons, with Green Bay having won 8 of their last 10 meetings, with another ending in a tie.  That includes wins in three of the last four games between the teams at the hole in the ground formerly known as the Metrodome (a massive improvement, to be sure).

This is the first time the Packers and Vikings will play outdoors in Minnesota since 1981, when Green Bay bested the Vikings 35-23.  Luckily for those playing and attending, Minneapolis is just breaking a cold spell, and the temperature is expected to be a balmy 42 degrees at kickoff – more in line with expectations for late October than late November.  While a few rain showers are possible, weather should not be a factor in this game.

The entire Vikings defense vs. Aaron Rodgers.  The Packers come into this game having put up over 50 points in two straight games, and with Aaron Rodgers red hot.  With 28 touchdowns against just 3 interceptions on the season and a rating over 120, Rodgers is playing his best since 2011, and perhaps as well as he ever had.  He is the clear leader for the NFL’s MVP award.

On the other side of the ball, the Vikings have quietly become the league’s 11th best defense by yardage against, and 8th best against the pass.  They will need a complete effort to stop Rodgers and his two primary receivers, Randall Cobb and Jordy Nelson.  I highly recommend they abandon the Bears’ “let Nelson run all alone” tactic.

For the Vikings, it is and will be Teddy, Teddy, Teddy until Bridgewater proves either a consistent player or a bust.  The Vikings are 29th in passing offense, and Bridgewater is third worst in quarterback rating among qualified passers.  He must do better if the Vikings are going to keep pace against the Packers.  Defensive Coordinator Dom Capers is not always a beloved figure in Green Bay, but he does have a pretty solid history of rattling young quarterbacks with shifting looks and blitz packages.  Bridgewater will be tested physically and mentally in this game.

For Green Bay, watching Clay Matthews’s alignment will be the most interesting tactical decision of the week.  Over the last two weeks he has often lined up at inside linebacker in what could most aptly be described as a 4-3 look, and at times even shifted into a location common for dime defensive backs.  He also continues to spend a fair amount of time lining up as a traditional 3-4 outside linebacker.  Matthews has been extremely effective in those games, and has an opportunity to cause problems for Bridgewater this week.  Given a history of success against struggling Vikings left tackle Matt Kalil, it is possible Green Bay will use him more traditionally this week.  However, the Vikings are reliant on the running game, and that argues in favor of putting Matthews in the middle.

The Packers are between notable games against the Philadelphia Eagles and New England Patriots, given this some potential as a trap game.  Furthermore, divisional rivalries tend to bring out the best of each opponent.  While Green Bay obliterated the Vikings in Lambeau Field earlier this season by a score of 42-10,the fact is that they have been significantly better this year at home than they have been on the road.  There are some reasons to believe this will be a tighter affair.  Having said that, the Packers are in the midst of a playoff race and facing what should be an overmatched opponent.  I don’t believe they will put up another 50 points, but I do believe it will be a relatively comfortable win for Green Bay.  Packers 31, Vikings 17.