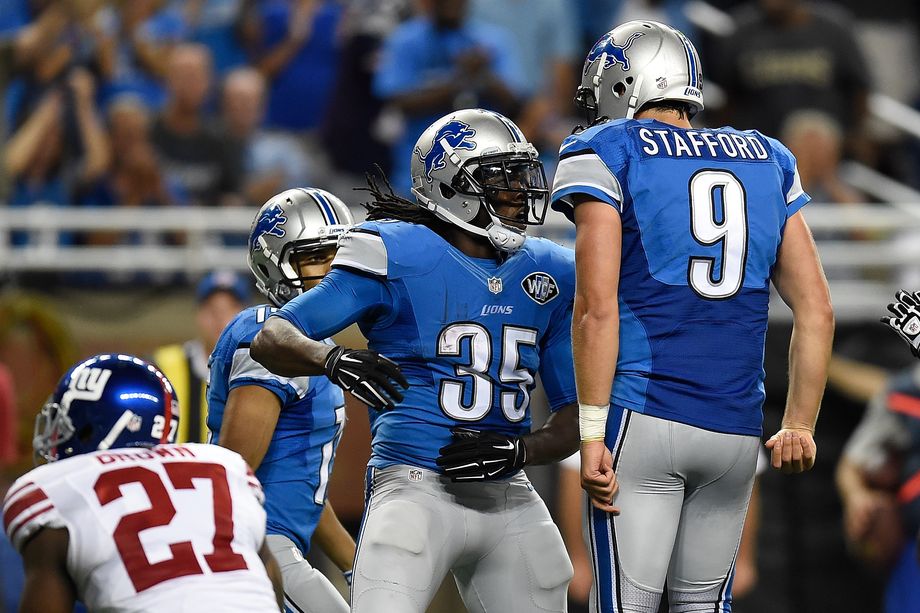 The Detroit Lions (9-4) have won 8 of their last 9 games. They aren’t quite done yet with a tough schedule in their final 3 games. Detroit travels to New York to face the Giants (9-4) on Sunday at 1PM on FOX. This game will have a huge impact on the playoff race in the NFC North and NFC Wildcard. A win for Detroit will greatly help their playoff chances (98% with a win) giving them the tiebreaker over the Giants if both finish with the same record. Let’s take a look at the matchups.

Matt Stafford has earned a 97.8 QB rating this year with 22 TDs and 7 interceptions. Stafford has completed 66.7% of his passes for a 7.4 YPA. However, Stafford is dealing with middle finger dislocation on his throwing hand. The injury caused some poor throws in the previous game against Chicago including a pick 6. Stafford has looked good in practice and has a special glove with only support on the middle finger. We will see if the injury will affect Stafford on Sunday.

This game will be the Lions first outdoor game since Week 4 and it should be rainy and in the 50s. Stafford must hope his grip holds and his passes are crisp with enough accuracy and velocity. The Lions have enough weapons for short passing with YAC to beat the Giants. However, Theo Riddick missed the last game and practice with a wrist and ankle injury. The Lions need Riddick to help exploit the Giants linebackers.

The Giants have a very good secondary and cover the QB well. New York is second in the league allowing only a 76.3 QB rating. They have played very well the last 7 weeks. New York has allowed only 13 TDs with 13 interceptions forced, 6.7 YPA and 58.2%. It will be a tough challenge for Stafford and his weapons. The Giants have 30 sacks on the season and get decent pressure. However, Jason Pierre Paul has been hurt and should miss this game. This is a blow to the Giants pass rush. However, JPP missed last week and the Giants still held the Cowboys to 7 points.

New York allows 18.8 PPG which is 7th in the league. Detroit’s offense will be tested. The Lions weapons need to step up and make plays. Marvin Jones (797 yards and 4 TDs), Golden Tate (820 yards and 3 TDs), Eric Ebron (521 yards and 1 TD) and Anquan Boldin (481 yards and 7 TDs) must beat their coverage. Janoris Jenkins, Dominique Rodgers- Cromartie, rookie Eli Apple, Landon Collins (5 ints) and Nate Behre is a tough secondary to pass against. The Giants LB are susceptible to be beaten in coverage and Ebron, Boldin and Tate must lead the charge underneath with good YAC and tough catches.

It is tough to pass on the Giants. There is more bad news for Detroit. It is tough to run on the Giants as well. The Giants allow only 3.6 YPA which is 3rd in the league. Detroit doesn’t have much rushing attack at 3.8 YPC and Ameer Abdullah, Theo Riddick and Zach Zenner are all hurt. Dwayne Washington has been banged up as well but should play. Zenner is in concussion protocol but was not wearing the red jersey in practice which is a good sign. The Lions may have to turn back to an old favorite in Joique Bell to establish the run against the Giants. Bell is fresh and knows the system but could be rusty. Hopefully, Washington, Zenner and Riddick can play for Detroit. The Giants missing JPP will help Detroit but New York has plenty of run stuffers led by nose tackle Damon Harrison.

Eli Manning is struggling this season with an 87.8 QB rating. The Giants only score 19.6 PPG (25th). The Giants are dead last in 3rd down conversions (33.3 %). Manning has thrown 23 TDs and 13 interceptions on the season with only 6.9 YPA. Ben McAdoo’s offense hasn’t lived up to expectations.

Eli has a major weapon in Odell Beckham. Beckham is hot in the last five games and has 1,109 yards and 9 TDs already on the season. Beckham is New York’s offense and will be a huge matchup against Darius Slay. Slay has a hamstring injury and the Lions really need him to be close to 100 percent for this big time matchup.

Sterling Shephard has 536 yards and 5 TDs as a rookie number 2 WR as well. Victor Cruz notched 466 yards and 1 TD in the slot. The Giants have the WRs to test Detroit. Will Tye isn’t much of a threat at TE but Vereen and Jennings can catch the football at RB.

Detroit allows a 101.3 QB rating on the season due to high completion percentage (72%) with 23 TDs allowed and 10 interceptions forced. The Lions allow completions but make tackles short of the sticks to force punts. The Lions have allowed only 15.4 PPG the last 7 games and are now 10th in the league in PPG allowed. Detroit has the defense to stop the Giants struggling offense.

Detroit’s pass rush has been down this season with only 22 sacks. Ziggy Ansah is battling a shoulder injury and ankle injury and still does not have a sack. Kerry Hyder has 8 sacks with consistent pressure but Devin Taylor has disappointed with 4.5 sacks and poor pressure. Armonty Bryant is injured after 3 sacks in 5 games and Anthony Zettel and Brandon Copeland don’t offer much as the 4th DE. Detroit must find a pass rush in this game and rattle Eli.

The Giants have only allowed 18 sacks but do allow pressure on Eli with hits and hurries. If Ansah, Hyder, Taylor and Ngata can bring the rush for Detroit, then the Lions can keep the Giants struggling offense at bay. However, Slay versus Beckham is still the biggest matchup.

Slay, Lawson and Quinn have played well this season. Wilson, Bush and Killebrew have picked up their play in the last 7 weeks. Rookie Adarius Barnes did fine in place of injured Quandre Diggs but was cut duet to a practice squad pick up rule. Asa Jackson will fill the nickel spot but the Lions play a lot of heavy nickel with three safeties. DeAndre Levy returned last week and looked good in limited action. Levy will boost the Lions LB coverage and run defense. Josh Bynes and Tahir Whitehead have both picked up their play in coverage for Detroit the last few weeks at LB.

Detroit has the talent to cover the Giants. However, Eli can’t have all day to throw and Beckham can make big plays (6 plays over 40 yards this year). Detroit must tackle well short of the sticks and generate more pressure (or at least timely pressure).

The Giants really struggle to run the ball. The Giants rush at 3.4 YPC and Rashad Jennings and rookie Paul Perkins have performed poorly this year. Shane Vereen is a receiving threat if healthy but is struggling with a concussion. Detroit should be able to bottle up the Giants rushing attack and put the focus on Eli Manning.

Field position may be key in a low scoring game in the rain. Matt Prater has been excellent on field goals this season (28/31) and Martin has boomed the ball with great net punting and coverage. Andre Roberts has two punt returns on the season for TDs. A third return TD or defensive TD could be huge to take pressure off Detroit’s offense against the Giants defense. Special Teams could decide this game.

Detroit wins this game 17-13. The defense and special teams for Detroit holds up as does Stafford’s middle finger. It will be a tough defensive game in the rain but the Lions get the big late (as always) play needed for the victory.