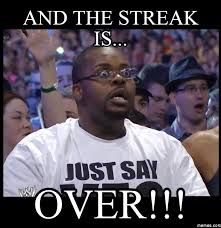 The Detroit Lions proved on Sunday they are without a doubt better than the Green Bay Packers. The Lions (2-7) beat the Packers (6-3) 18-16 by frustrating Aaron Rodgers and shutting down the Starks Express with ease. The Lions stopped the nightmare 24 game losing streak in Green Bay with the win. The last time the Lions won in Green Bay. Yesterday!!!!

The Lions coverage was sticky all game similar to Week 3 in 2014. Darius Slay had such a great game that Aaron Rodgers called him one of the best young corners in the league. Nevin Lawson stepped in with a great game for Rashean Mathis (9 games) who is out for the season with his concussion. Josh Wilson played a great game in the nickel spot against Cobb before injuring his knee late in the game. Rookie street free agent Crezdon Butler imposed his will on the two point conversion attempt by Green Bay. The Lions linebackers had solid coverage most of the day.

In the end, the mortal Aaron Rodgers was 35/61 (57%) for 5.4 YPA. The Packers run game led by Starks was shut down for 2.6 YPC on the day. Green Bay punted the ball 9 times and scored some late garbage time touchdowns.

The Lions offense had some trouble due a poor run game and solid coverage by Green Bay. Detroit only managed 3 first half points with 3 “three” and outs and another five play drive for four punts to start the day.

Detroit did manage a 12 play drive 56 yard drive in the second quarter that entered into Green Bay territory which stalled. Detroit punted for the fifth time but held strong defensively against Green Bay forcing a 3 and out. Detroit was awarded with great field position on their own 47 yard line. A Stafford 19 yard strike to Calvin Johnson got Detroit in field goal range. Matt Prater nailed 49 yard field goal to tie the game at 3 before the half.

The Lions got a shot in the arm with a 104 yard kickoff return to start the second half by Ameer Abdullah. Stafford found Pettigrew on a great throw to find a small hole in the zone on 3rd down for a 2 yard TD. Detroit was up 9-3 but Prater missed his first extra point.

Detroit smelled blood and clamped down on defense forcing two more Packer punts. The Lions had a great 12 play 70 yard drive to the Packers 24. However, on 3rd and 9, Lance Moore ran the wrong route and Stafford was intercepted. This cost Detroit 3 points.

Detroit forced another Packer’s 3 and out and got good field position on their own 45 yard line. Stafford again hit Calvin for a 15 yard strike and a 6 yard pass to get into field goal range. Matt Prater drilled the 51 yard field goal making him 10/10 on the year. The Lions were up 12-3 with 13 minutes remaining.

Green Bay answered with a 78 yard TD drive. Green Bay converted a 3rd and 9 with a penalty by Tahir Whitehead and a 3rd and 12 with a 20 yard pass to Randall Cobb. Rodger hit Aberderris deep for 32 yard to get inside the five yard line. Aberderris appeared to have dropped the ball on a hard hit by Glover Quin but they ruled it a catch and 32 yard gain. Rodgers hit Richard Rodgers on a 4 yard zone beater for the touchdown to pull the game to 12-10.

Detroit responded with a drive of glory. Stafford converted a 3rd and 9 with great pocket movement with a 13 yard first down to Calvin Johnson to start the drive. Stafford hit Golden Tate for 11 yards and Theo Riddick for 8 yards to set up a 3rd and 3. Stafford found Golden Tate and Tate made some incredible jukes for a 43 yard gain to the Packers red zone. Stafford hit Lance Moore for the back breaking 4 yard TD on 2nd and goal and the game was all but over. Detroit was up 18-10 and then Prater flukily missed his second extra point of the game. Green Bay had life.

Green Bay moved the ball for 73 yards and earned a late TD. Rodgers hit Starks for a big screen play to mid field. Rodgers found Perillo for 12 yards and a big first down to continue to move the chains. Rodgers converted a 3rd and 1 for a first down to Richard Rodgers for 6 yards.

Ziggy Ansah had a bone head low hit for a 15 yard personal foul first down to move the Packers into the Lions red zone. Finally, Rodgers threw a dart to Perillo for a 12 yard TD. The Packers were down 18-16. However, like an angel from the heavens, the Lions hero arrived with street free agent Crezdon Butler breaking up a jump ball intended for Davante Adams. Detroit held the 18-16 lead.

Green Bay’s luck continued as a knuckle ball onside kick went off Calvin Johnson’s shoulders and was recovered by Green Bay. Green Bay started the series at their own 49 yard line. Rodgers converted a 3rd and 10 for 12 yards to Davante Adams. Rodgers found Adams again for 3 yards and Adams was able to get out of bounds. However, praise be to Moon Jesus for Lions fans, Crosby properly shanked the tough and stressful 52 yarder to seal the Lions win. The Lions were the better team and 100% deserved this shank after their defensive effort all day and late offensive performance.

Detroit got a big win in Lambeau after firing their bad luck charms. Detroit will face the Raiders at Ford Field to start a 3 game home stand. Detroit has a really long shot for the playoffs at 2-7. Crazier things have happened but with the Lions winning in Lambeau yesterday this opened up the world to chaos. Welcome to chaos and Lions dominance for years to come.