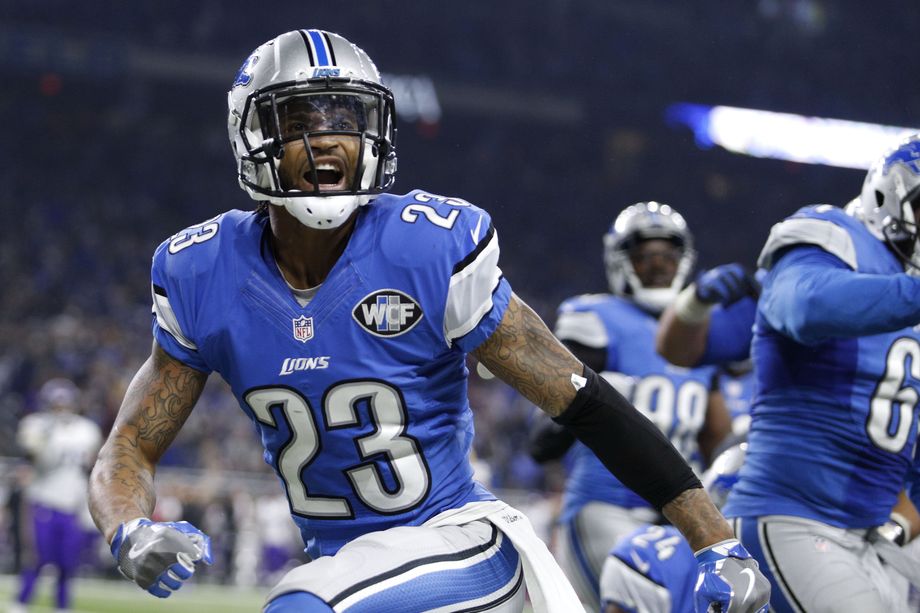 Thanksgiving was a success. We are all hopefully fat on turkey, pumpkin pie and a Lions first place victory. The Detroit Lions (7-4) won a crucial division matchup over the Minnesota Vikings (6-5) by a score of 16-13 with more Detroit late game heroics. Let’s take a look at the game.

The Vikings responded with a 12 play 75-yard TD drive of their own, The Vikings got 6 first downs with the aid of two Lions penalties in the secondary. The Darius Slay pass interference was questionable and a ticky-tack call but ultimately the correct call upon further review. The Lions lost an interception due to that penalty. Ziggy Ansah also appeared to have a strip sack but the officials ruled Bradford’s arm was going forward. Matt Asiata ran for five yards for the tying score. The Vikings and Lions looked like it would be an offensive game.

The Lions and Vikings traded punts. Detroit had 9 plays but stalled in Vikings territory. The Vikings went 3 and out when Tahir Whitehead stopped Asiata short of the sticks on 3rd down.

The Lions got the ball back at their own 30 yard line. Stafford hit Golden Tate for 41 yards on the first play of the drive. Riddick had a nice 12 yard run. However, the drive stalled with a poor first down run and miss to Marvin Jones on 3rd down. Prater hit the 29 yard field goal for the 10-7 Detroit lead.

The Vikings responded with two first downs and drove to the Detroit 41. Detroit was called for a PI but a tip by A’Shawn Robinson negated the penalty. The Viking turned the ball over on downs when Haloti Ngata tipped a second ball on 4th and 2. Detroit started at their own 41.

Detroit moved to mid field and decided to go for it on 4th down. Zach Zenner ran the ball and appeared to get the first down but the officials couldn’t tell from the replay for some reason. Detroit lost the challenge and the Vikings got great field position.

Detroit’s defense responded by forcing a 3 and out. Tahir Whitehead stopped Cordarelle Patterson for a 4 yard loss. Bradford was incomplete on second down. Rookie Mile Killebrew stopped Kyle Rudolph well short of the sticks on 3rd down. Minnesota had to punt again despite great field position at mid-field.

Detroit started at their own 14 with 1:06 left in the first half after a Locke punt. Detroit moved the ball for 8 plays and got back to the Vikings 49. However, a deep hail mary pass was incomplete and the Lions didn’t get any points before the end of the half.

The Vikings got the ball but punted after one first down. A holding call on Kyle Rudolph made it 1st and 20. The Lions were able to keep the Vikings well short of the first down marker and forced the punt.

Detroit’s offense fell asleep for the second half. Stafford was sacked by Anthony Barr on 2nd down which helped force the 3 and out.

The Vikings offense woke up and Bradford hit Jarrick McKinnon for 41 yards to start the drive. The Lions defense clamped down and forced a field goal. Rookie Mile Killebrew again tackled Asiata short of the first down. Kai Forbath’s 30 yard field goal tied the game.

The Lions did not respond on offense. Detroit got one first down but then two incompletes killed the drive. Detroit punted again getting a great punt by Sam Martin.

Minnesota started at their own 14 yard line and drove 75 yards in 13 plays. The Vikings dink and dunked down the field and netted six first downs. The Vikings moved to the Lions 10 yard line but a huge chop block penalty by TJ Clemmings hurt the Vikings. It moved Minnesota back to 1st and goal from the 25 yard line. Bradford hit three short passes but only got back to the 10 yard line. Forbath hit the 28 yard kick and the Vikings took the lead by a 13-10 score.

Detroit’s offense wasn’t ready to respond yet. A 10 yard loss sack on first down seemed to doom the drive. However, Stafford ran for 15 yards on 3rd and 15 and got a first down. However, another incomplete to Jones on 2nd down caused a 3rd and 7. Detroit inexplicably ran the ball and Riddick was stopped after three yards. Detroit had to punt for the third consecutive time in the half.

The good news is Detroit’s defense responded. Minnesota got one first down but Josh Bynes made a stop on 3rd down and forced a Vikings punt. Locke had a great punt and Detroit had to start at their own 2 yard line.

With 5:02 to play and their backs against the wall, it was time for Detroit to dominate. The Lions drove 68 yards and notched three big first downs. Stafford hit Boldin for 29 yards on 3rd and 8 as the crucial play. Detroit earned a 2nd and 3rd and 1 at the Vikings 29 but couldn’t convert. Prater nailed the 48 yard game tying field goal despite the pressure. Prater continues to be so clutch this season.

The Vikings got the ball with 1:45 to play. The Vikings seemed to convert a first down but an illegal formation caused a 3rd and 7. Glover Quin recognized the defense and called bait coverage. Big Play Slay read it perfectly and stepped in front of Thielen for the interception. Slay returned the pick to the Vikings 20 yard line and was down by contact before he fumbled.

Stafford kneeled to set up the field goal position for Prater. Clutch Prater nailed the 40 yard kick as time expired. The Lions took control of the division at 7-4 and essentially have a two game lead in the North with five games to play. This was a huge win for Detroit and their division title aspirations.

Detroit must carry forward their momentum into the last five games with a two game lead. Detroit has won 6 of their last 7 games. Detroit travels to New Orleans to face a good Saints (4-6) offense in a tough road game at the Superdome. Detroit has an extra few days to rest before the early December tilt. The Lions have beaten the Saints twice in a row and look to make it a third victory in a crucial game next week.