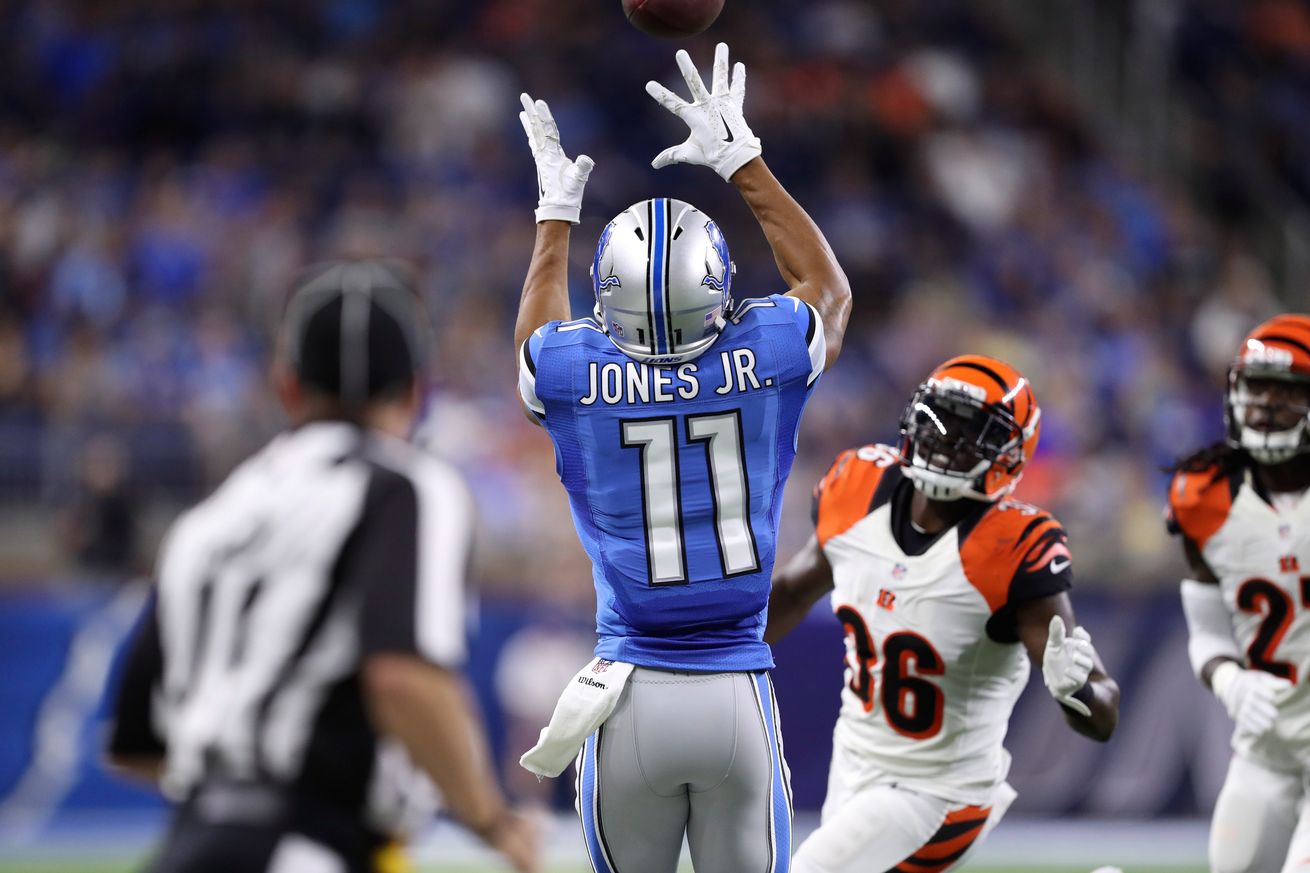 Detroit played their second pre-season game on Thursday night. Let’s take a look at the good, the bad and the ugly in the Lions 30-14 loss to Cincinnati.

Matt Stafford was throwing darts and had time to throw except for one play (strip sack by Dunlap beating back-up undrafted tight end Cole Wick). Stafford was 8/11 for 113 yards and clearly has a strong rapport with new addition Marvin Jones (4 catches for 65 yards). The Lions passing game is looking strong and both Jones and Tate played well.

The pass protection was good other than the one play mentioned against Wick. Stafford had time to throw in the pocket and led a field goal drive on the Lions opening drive after starting at their own 15 yard line. Stafford completed passes to Tate for 12 yards, Jones for 32 yards and Jones for 19 yards. Riddick also run for one first down on 2nd and 3. The Lions threw short on first down near in the redzone and a whiffed run play led to 3rd and long. Stafford threw a laser to Golden Tate in the end zone but he dropped the ball due to uncalled interference by the Bengals. Prater nailed his field goal.

The other two drives the Lions earned a first down (Tate for 10 yard and Tate for 19 yards) on each drive but then the drive stalled. Wick missed a block for the sack and Bengals had good coverage on 3rd and 10 to kill the second drive.

A false start by Matthew Mulligan turned a 2nd 1 into 2nd and 6 for Detroit on the third drive after a 9 yard pass to Marvin Jones. Detroit had a 3 yard run to Riddick and Stafford missed Riddick in the flat on 3rd and 3 which ended the drive.

The Lions first team defense all played 3 series other than DeAndre Levy. The first drive was poor as the Bengals marched down the field with Dalton going 5/5 and Jeremy Hill running wild on 3 carries (including a 9 yard TD run). Detroit shored things up after a poor start and forced two 3 and outs with solid pressure and good coverage. Ngata penetrated often and Whitehead was all over the field making plays at the MIKE spot. Darius Slay had a nice pass breakup on 3rd down on the 3rd Bengals drive.

The Lions second and third string defenses got beat pretty thoroughly to the tune of 17 points allowed (plus a Dan O pick 6). Detroit gave up a long drive to the Bengals right before halftime and terrible drive in the fourth quarter for an easy Bengals TD. The Lions need much better play from their depth.

The Lions run blocking was atrocious. Theo Riddick is not a good runner and the Lions really need Ameer Abdullah back by Week 1 and to play Zach Zenner more often with the first team. Hopefully Cooter is not tipping his hat on his new running scheme but really Detroit is not winning their running matchups in these first two pre-season games.

Dan Orlovsky threw his second pick 6 in as many games. Orlovsky threw behind Zach Zenner in the flat and it netted 6 points for the Bengals. Orlovsky was out of synch in the 3rd Quarter and thoroughly booed by the crowd. Jake Rudock showed signs of life but also had an interception on a deeper pass that led to a Bengals field goal as well. Dwayne Washington looked solid and had the Lions only TD on a 5 yard run late in the game.

The Lions special teams coverage and returns were terrible. There were costly penalties and one even extended a Bengals drive. Prater and Martin and the long snappers looked good but Detroit must shore up their return and coverage game.

Injuries: None of note. DeAndre Levy, Brandon Pettigrew, Ameer Abdullah, Eric Ebron, and Michael Ola did not play in the game due to injuries.

In the end, it’s just pre-season. The Bengals are a playoff team with a good defense and a good test for the Loins. The Detroit starters passed the test but showed some flaws. We’ll see how they will respond in the regular season once they can scheme and schemed upon.

Detroit must sure up the run blocking no matter what though before Week 1. The Lions travel to Baltimore on Saturday August 27 for the final tune-up for the starters as most will sit for the 4th game against Buffalo. Let’s hope Detroit has some run game and special team answers and start faster on defense.