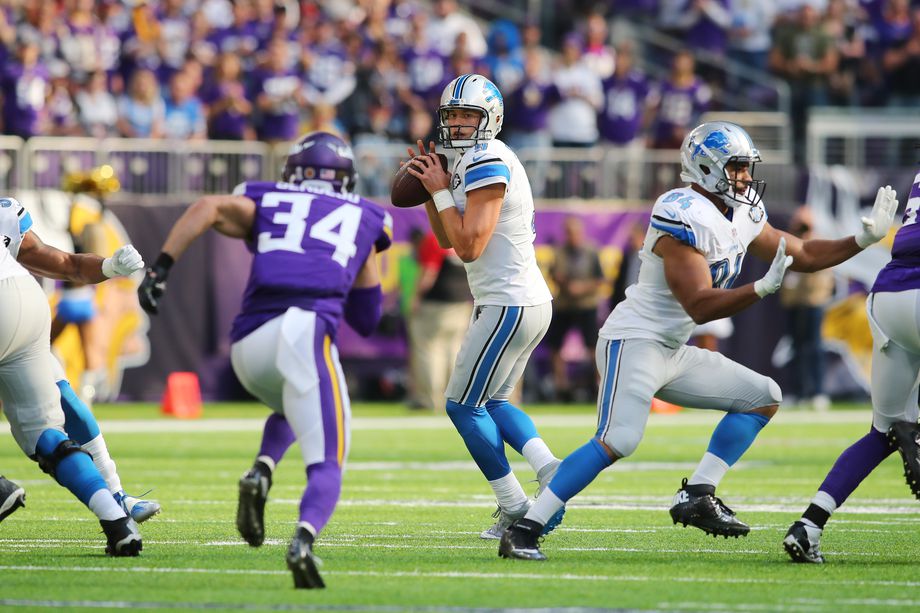 The Lions (2-1, tru 3-0) will travel in Week 4 for their first divisional game of the season. The Lions visit the Minnesota Vikings in Minneapolis (2-1) in a huuuuugeee Week 4 tilt at 1 PM ET on FOX. The Vikings beat the Saints and Tampa Bay at home pretty handily but lost at Pittsburgh. Minnesota gets another home game and will look for revenge from Detroit’s overtime win last season in Minnesota.

Detroit beat the Cardinals at Ford Field and Giants in New York but lost at Ford Field to Atlanta on an egregious missed call on DPI (among other poor calls in the final minute) by the referees plus a ludicrous ten second run off (which should have been called down not a TD). Detroit should be 3-0 but are 2-1 due to referee mistakes. The Lions are angry and will take it out on the Vikings.

*Vikings Horns Sounds* or was that Shooter?

QB Matt Stafford has a 100.1 rating for the three games played with 7 TDs and only 1 interception. Stafford has completed 64.5% of his passes but his YPA has lacked at 6.3. Detroit will be challenged by a good Vikings defense in Week 4.

Golden Tate has played well with 190 yards and 1 TD (really two TDs). Marvin Jones has only 88 yards but 2 TDs. Jones will have a very tough matchup against Xavier Rhodes. Rhodes has shut down Mike Evans, Antonio Brown and Michael Thomas in the past three weeks. We’ll see if Jones can sneak in a few catches down the field or beat zone coverage.

Tight end Eric Ebron has only one good game of 3(against the Giants this year) and MLB Erik Kendricks and safeties Harrison Smith/Andrew Sendejo are tough matchups for him. Ebron will have to prove his worth this week and rebound from Week 3.

Running backs Ameer Abdullah and Theo Riddick can have success in the passing game underneath but must get that important YAC. Rookie wide out Kenny Golladay had 102 yards and 2 TDs and can beat former 1st round pick Trae Waynes. The rookie will need to step up like in Week 1. The Vikings have allowed a 95.9 rating (19th) with 5 TDS and 3 interceptions so they can be beaten if the QB has time.

The Vikings bring a strong pass rush and the Lions offensive line has been hurt with Decker (PUP) and Swanson (Week 3 ankle) out. Greg Robinson must figure out how to limit stud DE Everson Griffen (4 sacks). Right tackle Rick Wagner can take care of Danielle Hunter or Brian Robison on the other side. The Lions should have Darren Fells help Robinson a lot in this game. The Vikings only have 5 sacks with 4 from Griffen but they do still get consistent pressure.

Travis Swanson returning will be a key to block Linval Joseph and Tom Johnson in the middle for the Vikings. Watch out for Kendricks and Anthony Barr blitzing as well from the LB spot. Mike Zimmer loves his A gap blitzes. The Lions must bring their A game in blocking this week.

If Stafford gets time, he can pick anyone apart with his weapons. The key will be YAC on the short routes to extend drives.

Detroit has only one good rushing day out of three games. Abdullah didn’t have much room against Atlanta with Swanson out and Zach Kerin playing left guard. The Lions need Swanson back and to open up more holes for Abdullah.

Abdullah can make anyone miss. If Abdullah busts one or two long runs over 20, Detroit will be in much better shape on offense than they were against Atlanta. The Vikings have only given up 3.0 YPC (3rd in league) on the season so it will be another good run defense for Detroit to face.

Sam Bradford is out again this week for the Vikings. Bradford had a great Week 1 (143 rating) against the lowly Saints but missed the last two games. He missed practice on Wednesday and Thursday and was ruled out with a knee injury. Bridgewater is still on PUP and it was up to Case Keenum since the Bradford knee problem. Keenum gets the start again.

Keenum is a vet with starting experience and played really well against a banged up Tampa Bay defense (142 rating) with 3 TDS and 0 interceptions. Keenum struggled in Week 2 at Pittsburgh (65 rating) with no TDs. Case had a good game against Detroit while with the Rams last year so they won’t take him lightly if he is called into duty again.

The Lions defense has been very strong through 3 weeks despite a bad first half against Atlanta (20 points allowed). Detroit has forced 8 turnovers (second in the league) with 2 interception returns for touchdowns. The Lions led by Teryl Austin have made big stops in the fourth quarter, even against Atlanta and can keep Detroit in this ball game. Detroit is 5th best in passer rating allowed this season so far.

Detroit will be challenged as Stefon Diggs and Adam Thielen are having great starts to the season. Thielen has 299 yards and Diggs has 293 yards and 4 TDs already. Rudolph is a threat with 75 yards and 1 TD and Cook has 82 receiving yards from the running back spot. Former first round pick Laquan Treadwell has 42 yards. The weapons are there for Keenum.

Slay will need to stop Diggs which is another big matchup for him. Nevin Lawson/DJ Hayden must step up against Thielen and limit his yardage. Thielen has 6 plays over 20 yards and Diggs has five. Detroit is good at limiting big plays and must continue that this week against two big play receivers.

Detroit getting pressure is the key to the game. Detroit will need interior pressure to challenge Joe Berger, Nick Easton and rookie Pat Efflein (center). Keenum and Bradford are not very mobile which will help Detroit get sacks. Detroit should continue their strong consistent pressure in Week 4 on Minnesota.

Rookie Dalvin Cook has done well with 4.7 YPC on 61 carries. Cook is a beast and has had good run blocking. McKinnon and Murray only have 8 and 7 carries a piece so Cook is the workhorse to watch.

Detroit really needs ILB Jarrad Davis (concussion) and strong safety Tavon Wilson (shoulder) back from injury for run defense. The Lions were incredibly stout the first two weeks but struggled in run defense against Atlanta without Davis and Wilson against Freeman and Coleman. Cook has shown he can play well as a rookie and the Lions need to be strong in their gaps and tackle well.

If Detroit gets those two players back (Davis/Wilson), they can shut down Cook. If Cook is shut down, the Lions defense can have a lot of success against a one dimensional passing offense. This will lead to the Lions consistent pass rush and forcing more turnovers.

Prater is a weapon and made the Vikings pay with a 58 yard field goal to force overtime last season. Prater already has four kicks over 55 yards this season (record) and Detroit won’t have to move the ball much to get 3 points. This can be a big factor in a low scoring defensive game.

Vikings kicker Kai Forbath is perfect on field goals for the Vikings (6/6). Blair Walsh’s issues helped Detroit last year but Prater also missed an extra point in the game in Minnesota. Kicking will matter in this low scoring affair.

The Lions are angry and need to respond. They swept the Vikings last year which was crucial to the Lions making the playoffs. The Vikings play them tight in two low scoring games but Detroit needs to figure out how to come out on top again. Turnovers and Lions run defense will be the key to the game. Detroit wins this defensive game with a last second Prater field goal.