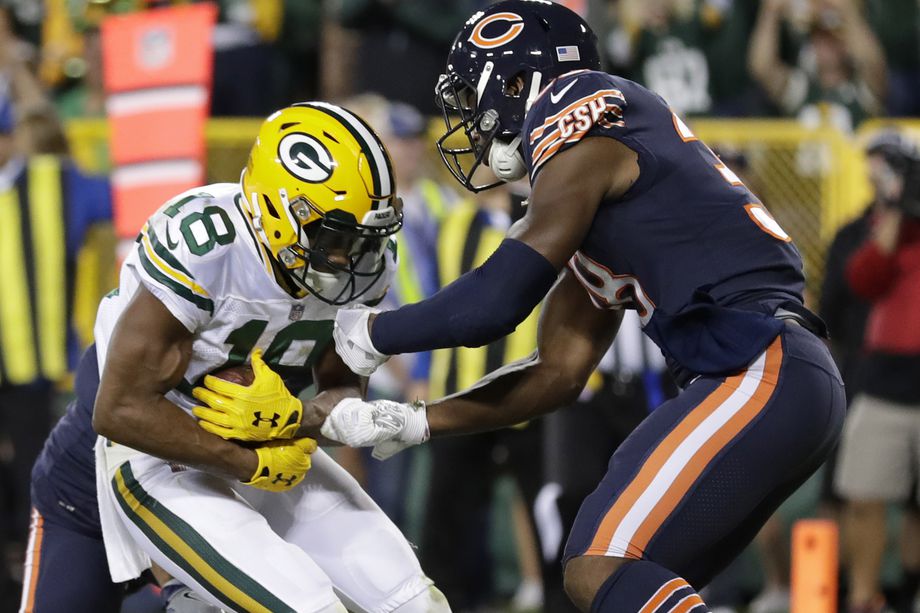 The Packers (3-1) earned a big win at Lambeau Field Thursday night over the Chicago Bears (1-3). Green Bay took the lead in the all-time series with the win and showed just how much better they are than the lowly Bears.

Green Bay got the ball and marched right down the field. Ty Montgomery looked great on five carries but ended up breaking his ribs. Losing Montgomery was a tough loss for the Packers. Rodgers hit Cobb and Bennett (26 yards) for two big first downs. Finally, Rodgers found Davante Adams for the 4 yard TD.

The inept Bears showed their turnover problems early. Clay Matthews was matched up against tight end Dion Sims for some reason and Sims got beat badly. Matthews forced a fumble on the first Bears play and Jake Ryan recovered. Rodgers hit Cobb on 3rd down for the 14-0 lead.

Chicago earned two first downs and a roughness penalty on Clinton-Dix to the Packers 25. However, Glennon wasn’t ready for a snap and it went off his knee and into the Packers defense. Blake Martinez recovered the fumble to avoid Bears points.

The teams traded punts twice and there was a 47 minute rain delay due to a fluke late September lightning storm with heavy rain and wind. Green Bay punted upon return after six plays.

The Bears continued their turnover woes as Mike Glennon was picked off by Ha Ha Clinton Dix. Rodgers went for the throat and hit Jordy Nelson deep. Rookie Aaron Jones punched it in the end zone with a TD run and 21-0 Packers lead.

They would trade punts again. Finally, the Bears earned a scoring drive with Glennon hitting slot WR Kendall Wright for the TD. It was 21-7 at the half.

Chicago had a chance with the ball to get back in the game. They drove down the field but Connor Barth missed a field goal. Rodgers made them play with a 13 play 63 yard drive for the back breaking TD. Rodgers threw his 3rd TD of the night to Jordy Nelson for the 28-7 lead.

Surprise, surprise, another Bears turnover occurred. Glennon was intercepted by Kentrell Brice and Green Bay started on the Bears 42. Six plays later, Rodgers found his favorite target Jordy Nelson again for the 8 yard TD. Rodgers had a 128 rating despite low yards due to 4 TDs.

The Bears drove 75 yards for a garbage TD by Jordan Howard. The Packers punted but ate up 2:20 seconds. The Bears did nothing on the final drive.

Green Bay easily won 35-14 despite the Packers missing both of their starting offensive tackles, three backup tackles, Mike Daniels, Davon House, RB Ty Montgomery and rookie RB Jamaal Williams for most of the game. Rookie 2nd round pick Josh Jones got hurt but returned. ILBs Blake Martinez and Josh Thomas both got hurt and Devante Adams was hurt and put on stretcher on a bad hit by Danny Trevathan. The Packers have some injury problems but get a mini-bye to rest and get most people back by Week 5 or 6.

Green Bay took control of the North and will be matched by the Lions or Vikings on Sunday in their divisional tilt. The Bears are toast and have a tough call to either kill their rookie’s confidence at QB or continue the clown show of Mike Glennon at QB.