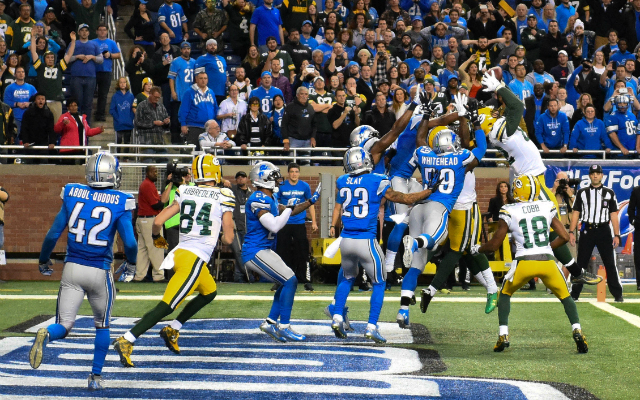 Receiving weapons is next on the docket for the positional rankings. Weapons includes WRS, TEs and all receiving running backs.

The Lions lost Calvin Johnson to retirement but they still have a ton of very good weapons. Golden Tate is a proven 1,300 yard WR that can add 5-6 TDS. He can pick up big clutch first downs and make big plays with YAC. Tate can produce like a number 1 WR and proved that in 2013 and 2014 when needed.

Marvin Jones was a big free agent addition from the Bengals. Jones has been a good number 2 WR in this league. Jones had 816 yards and 4 TDs on 103 targets in 2015 and a 10 TD season in 2013. Jones should get more looks in Detroit’s offense and can be a 1,000 yard WR with more targets. He has good hands, size and speed. He fits Cooter’s offense perfectly.

The Lions have a good emerging tight end in Eric Ebron. Ebron was very efficient and explosive in 14 games for Detroit in 2015. Ebron caught 68% of his targets and had great YAC per reception. Ebron will get more targets than 69 and should have a big year in his third year of his career. Ebron will be a red zone threat with Calvin Johnson no longer stealing the targets.

Theo Riddick is a 700 yard receiving RB that can make plays in the open field and make defenders miss. He is a huge asset for Detroit in the underneath passing game and was efficient despite very high targets (99).

TJ Jones improved and had a few clutch catches during the tail end of 2015.Undrafted rookie Jay Lee and 4th year WR Corey Fuller have some speed in the battle for the 5th WR spot. The Lions have some experience and talent with their 4th and 5th WR.

Ameer Abdullah is a solid receiver as a running back as well but took a back seat to the great play of Theo Riddick. Stevan Ridley is an adequate RB receiver.

The Lions have two potential 1,000 yard WRS and a potential 800-900 yard TE with the proper targets. The Lions have solid slot options and decent speed depth. The Lions should have improved pass protection and Stafford can have another big year (97 rating or higher).

The Saints drafted Michael Thomas in Round 2 of the draft. He provides good speed and agility for the Saints adding a young talent. The Saints don’t’ have much at 5th WR or backup tight end.

Ben Watson had a monster year but bolted for Baltimore. Coby Fleener had a down year but can be 600-800 yard Tight end. Fleener has a 600 and 700 yard season in his 2nd and 3rd year of his career. CJ Spiller is athletic and was solid with 239 yards and 2 TDs. Ingram had 400 yards and 9 YPC.

The Saints have really good talent and hope Fleener can rebound in 2016 with a change of scenery. Saints have solid receiving running backs but lack some depth other than the rookie Thomas. Brees should have a big year in New Orleans in a contract year.

Jordy Nelson was a great receiver. He is a 1,200 WR and double digit TD guy. However, Nelson is coming off a torn ACL. He must prove he can be a number 1 WR again.

Devonte Adams is a huge disappointment for Green Bay as a second round pick in two years. He is not efficient and 483 yards and 1 TD is terrible for 93 targets in 2015. Adams must step up in 2016 to boost the Packers passing game. James Jones is gone despite some TDS in 2015. Adams must be the new Jones at least but in a more efficient manner.

Ty Montgomery showed flashes (136 yards and 2 TDs) as a rookie but an injury derailed his 2015 season. Montgomery is the perfect backup slot WR to Cobb but must prove he can play on the outside to be useful depth as the 4th WR. Montgomery had a similar year to the Lions TJ Jones (132 yards and 1 TD on 18 targets). Both have potential to be good players for the future.

Jarred Aberderris and Lucky Hail Mary Janis have shown some flashes but don’t offer much with route running. Aberderris is oft injured and had 111 yards in 2015. Janis only caught 2 of 11 targets but they were both big gainers (46 and 33). This is similar to how the Lions used Corey Fuller in 2014. Trevor Davis has good size and speed as a 5th round pick but must develop his route running. The Packers depth is average at best with these players as the top outside WR options.

Jared Cook has some decent seasons with the Rams and Titans but Cook was not efficient, had low YAC and led tight ends in drops in 2015. Cook had a terrible QB situation and could improve with Aaron Rodgers. Richard Rodgers had a good 8 TD season but is not explosive at all (8.8 YPC with terrible YAC). Rodgers 510 yards on 85 targets was enough to bring in Cook for competition. Perillo is a decent third tight end.

Starks is good in the screen game but not in the open field or getting separation. Lacy is a solid RB receiver at best.

The Packers could regain the top spot but Nelson, Adams, their tight ends and depth have a lot to prove.

Julio Jones may be the best WR in the league. He had 1,871 yards and 8 TDs. Mohammed Sanu was added from the Bengals in free agency. Sanu proved to be a good number 2 WR with 790 yards 14.1 YPC and 5 TDs in 2014. Sanu played more with Jones out with a broken foot.

Justin Hardy had 194 yards and 0 TDs and the Falcons hope he emergers into a good number 3 WR. Devin Hester is the return specialist but offers some speed at WR. The Falcons lack a good 5th WR.

Jacob Tamme had a surprising 657 yards on 85 targets. Austin Hooper was drafted by the Falcons to provide a better pass catching tight end.

Devonte Freeman had 578 yards and 3 TDS on 98 targets. He isn’t as elusive as Riddick but he’s a good receiving running back.

Atlanta has a great WR but they are hoping for big things from Sanu, Hardy and Tamme in 2015.

Kevin White is a rookie top 10 pick from 2015 that didn’t play due to a shin injury. White has the size, speed and talent but has a lot to prove in his first year starting in 2016.

Zach Miller was efficient on 49 targets with 439 yards and 5 TDs. He was a nice late season target that Cutler had confidence. Miller was re-signed this offseason Bears traded Martellus Bennett after a down and injury plagued year in 2015.

Eddie Royal was a disappointment in the slot after a solid 2015 season with San Diego. Marquess Wilson was solid with 464 yards and 16.4 YPC average. If Wilson and White can emerge, the Bears could have some serious weapons.

Matt Forte is gone but had a down year receiving in 2015. Jeremy Langford was solid with 289 yards on low targets. Langford and Jacquizz Rodgers must show more in the passing game.

The Bears could make a big jump in weapon rankings if White and Wilson break out and Jeffrey stays healthy. Miller is a reliable tight end and the Bears have experienced depth at WR.

Laquan Treadwell was a great college WR. He has the production and can win jump balls and get separation. He can make tough catches and could be a number 1 WR down the line. Treadwell is still a rookie and WR takes time to develop. Many question Treadwell’s slow 40 time too. We’ll see how much 40 time matters this season.

Stefon Diggs didn’t need time as a rookie last year. He proved to be a good number 2 WR with 720 yards and 4 TDs on 84 targets. Diggs gets good YAC and separation and works well underneath for Bridgewater as a 5th round pick. Diggs was a great find by GM Rick Spielman.

Kyle Rudolph is a solid tight end but more is expected from him. Rudolph had 494 yards and 5 TDS on 71 targets which was solid for him but he can provide more. Mycole Pruitt has some potential as a backup receiving tight end.

Jarius Wright is an average slot WR with 442 yards and 0 TDS. Charles Johnson is good depth as the number 4 WR despite a down year in 2015. Cordarelle Patterson is a bust 1st round pick but you could do worse as a 5th WR. Patterson is a great returner.

The Vikings lack deep speed which could be a problem. However, if the offensive line can’t protect Bridgewater or he can’t throw it deep, then it doesn’t matter how much speed they lack. The Vikings have talent and can win without WR weapons. They have the defense and Adrian Peterson. If Treadwell and Rudolph emerge for Bridgewater, the Vikings will be incredibly dangerous.

I don’t know how they did it. Kelvin Benjamin tore his ACL and Carolina still had a great offense in 2015 scoring over 30 points per game. Benjamin wasn’t efficient but had 1,000 yards and 9 TDS in 2014. Benjamin will return but like with Jordy Nelson people will question his play after injury.

Greg Olson is a great tight end with 1,104 yards and 7 TDS. Ted Ginn finally realized some potential with 10 TDs and 739 yards. Jerricho Cotchery is a solid third WR with 485 yards and 3 TDs. Rookie second round pick Devin Funchess improved as the season went on and had 5 TDs to help Carolina. Corey Brown is a good 5th WR with 447 yard and 4 TDs. Cam Newton earned that MVP.

Stewart and Tolbert were not good receiving running backs.

Vincent Jackson had some injuries and only 540 yards and 3 TDS. He must step up and regain his old form to be a good number 2 WR.

Louis Murphy is coming off injuries and was signed to be the number 3 WR.

Austin Sefarian Jenkins only had 338 yard and 3 TDS in 40 targets due to injury. Luke Stocker hasn’t emerged as a good backup tight end.

The Buccaneers seems to have weapon issues again for 2016.

The Lions and Saints have the most and many different weapons. Green Bay can reclaim the top spot if Jordy Nelson proves he has recovered well from his injury. However, Green Bay’s depth and Davonte Adams must step up. The Falcons are relying on some new faces but are always set if Julio Jones is playing.

The Bears, Vikings and Panthers have plenty of weapons but have young players that have a lot to prove. The Buccaneers lack some weapons other than Mike Evans.

Next we’ll look at the running game for each team.