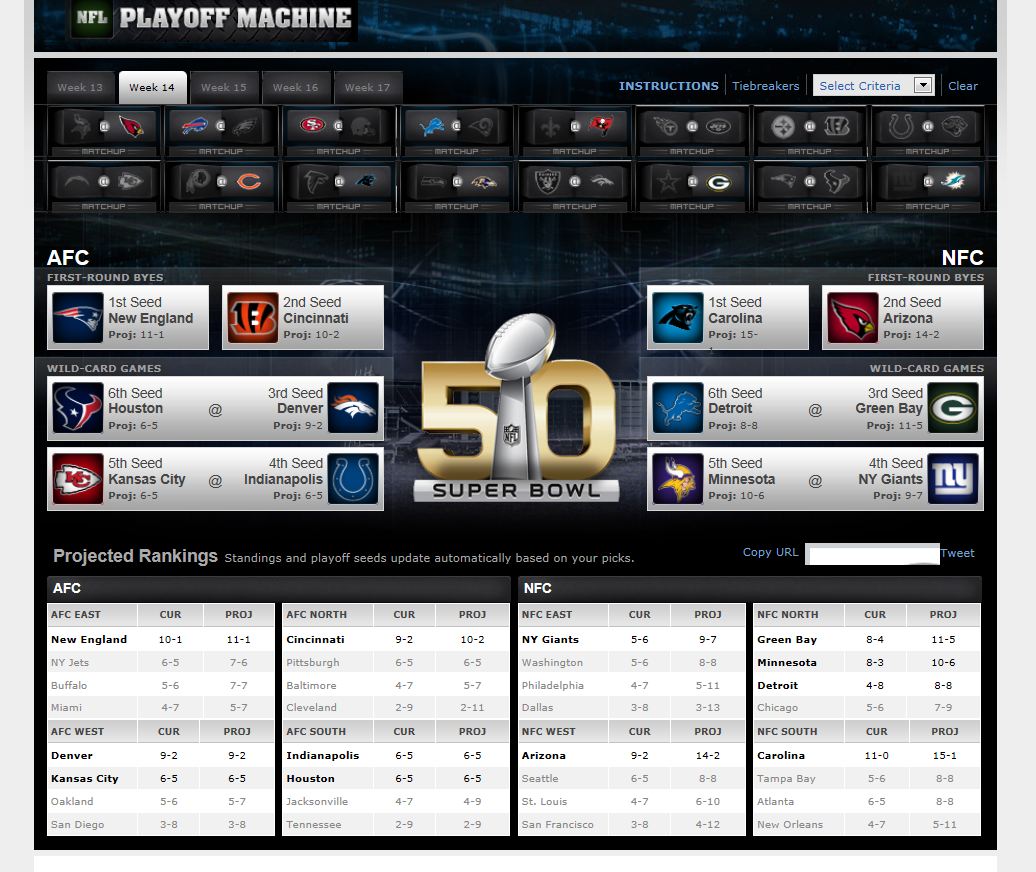 The referees and Aaron Rodgers made me cry. The Lions lost on a miracle Green Bay Hail Mary (27-23) blowing a 20 point lead. The Lions won by a true score of 23-14. Good news!!!! There is hope. Through the magic of a down year in the NFC and the playoff machine, Detroit can make the playoffs at 8-8.

Detroit is playing well. They won 3 in a row and had the Packers on the ropes until a Hail Mary. Detroit can beat the Rams, Saints and Bears on the road and the 49ers at Ford Field. Clearly this is not a guarantee considering how Detroit blew an 18 and 20 point lead against San Diego and Green Bay. But Detroit is talented enough to finish 4-0. Do they have the will and desire after a gut wrenching loss?

Finish 3-2 or worse. Tampa is 5-6 and hosts the Falcons, Saints and Bears. Tampa travels to the Rams and Carolina. Tampa winning their 3 home games and losing their two road games is pretty likely actually. Tampa beating Atlanta would be a great start to this scenario.

Redskins or Giants MUST:

Only one team needs to go 3-2 or worse. The other team can win the division or be 8-8 too.

Finish 3-2 or worse. The Skins host Dallas, travel to Chicago, host the Bills, travel to Philly and travel to Dallas. 3-2 is possible with division rival games and a trip to Chicago.

The Giants host the Jets, travel to Miami, host Carolina, travel to Minnesota and host Philly. I gave the Giants 4 wins (3 against NFC teams). Giants won division at 9-7 and Redskins at 8-8. Even with both the Redskins and Giants at 8-8 and Detroit was still the 6th seed.

This is the tough one. Seattle must finish 2-3. Seattle travels to Minnesota, Baltimore and Arizona. Good chance for 2 losses there, hopefully three. Seattle hosts the Browns and Rams. Even if Seattle beats Rams and Browns but lose to Baltimore, the Lions at 8-8 would be ahead of Seattle. Rams beat Seattle already this year. The head to head tie breaker with Detroit wouldn’t matter with more than two 8-8 teams and not everyone playing each other.

Finish 3-2. The Lions can give the Bears one loss in Week 17. Chicago must lose to San Francisco or Redskins at home but not probable. But most likely they lose at Minnesota or at Tampa. In this scenario, I gave Chicago losses to Detroit, at Tampa and at Minnesota.

The Lions would beat the Rams and Saints in this scenario giving them their 8th loss. There is one other loss on each of their schedules for sure in the last five games.

So You’re Telling Me There’s a Chance

There you have it. Detroit is in the hunt still and the scenario is fairly probable regarding the other teams. The pesky tricky part is finishing 4-0 with three games on the road. Root for the Bucs and Vikings this week.