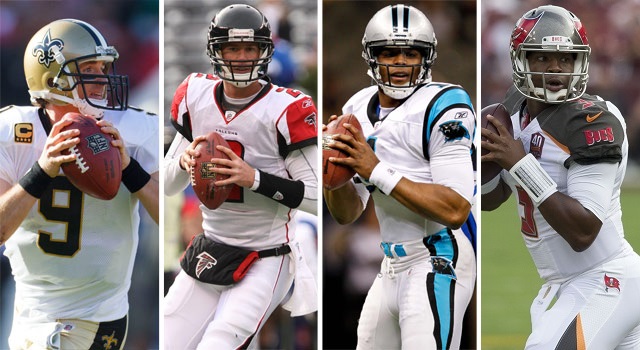 The halfway point of the season is fast approaching and the teams of the NFCS want to make any sort of splash in the post-season, they need to fix what’s broken now.  Atlanta was sitting pretty until they fell asleep before their match-up with San Diego was over and they must convince themselves that they’re not going to collapse like last season.  The Falcons’ loss opened the door for a surprising Tampa Bay team that climbed up to .500 by man-handling the San Francisco 49ers.  New Orleans and Carolina have an outside shot at the division, but they will have to greatly improve their level of play.  Onto the games…

If we only look at the Bucs’ 3-3 record and their 2 consecutive wins, we might think that they’ve turned a corner and on their way to becoming a good football team.  However, when we look at who they’ve played, we can see that this is probably not the case.  They did score a week one win over the Falcons, but their last two wins were against teams with a combined record of 2-11.  One of the hallmarks of a good team is winning the games you are supposed to win, so we’ll see if they fit in that category when they take on the Raiders.  Oakland isn’t an elite team in the NFL, but Jack Del Rio seems to have them moving in the right direction.  Their offense is clicking under Derek Carr, who has a better than 4:1 TD to interception ratio while completing almost 66% of his passes and the running game is averaging 115 yards per game.  On the other side of the ball, the grass isn’t greener.  The Raiders are giving up more yards per game than any other team (yes, even more than the Saints) and they are bottom ten in points per game.

Prediction – The Bucs have the home field advantage and have won two in a row but I don’t think that will be enough for them to out-score Oakland.  31-17 Raiders

The Saints let a game slip away from them last weekend in Kansas City.  Snatch defeat from the jaws of victory they did.   The only bright spot is that Brees didn’t have a typical, mediocre, road game.  Drew completed 77% of his passes for 367 yards with 3 TDs and 1 INT (that was more the fault of his receiver not holding onto a ball that hit him right between the numbers).  This week Brees and the Saints will be back at home where the offense is usually one of the best in the league.  However, home or road, the defense is still one of the worst ever even if they did have a decent game last week.  None of this matters though as the big story is the return of Jimmy Graham.  The TE will face his former team in New Orleans for the first time since the surprising trade before last season.  Graham is healthy and should play, but he hasn’t been as destructive for the Seahawks as he was for the Saints, but that was to be expected.  The Saints defense might be able to perform well here, as Seattle’s offense near the bottom of the league in almost every category, averaging only 18.5 points per game.  If the Saints are going to have a shot at winning this game, they’re going to have to figure out Seattle’s defense which is top notch.  Three times this season the Seahawks’ defense has held teams to 10 points or less and the only team to score more than 20 on them is the league’s top scoring offense, Atlanta.

Prediction – Like the Bucs, the Saints have the home field advantage and a few years ago, that really meant something.  The last season and a half have witnessed the Saints become mortal at home and I don’t see them getting well against Seattle.  24-17 Seahawks

How the mighty have fallen.  The Panthers are sitting at 1-5 and even though they managed not to lose during their bye week, they have a problem heading their way in the form of the Arizona Cardinals.  Last season’s top offense is putting points on the board and moving the ball well, but their turning the ball over at a feverish pace; 16 times so far this season and are -8 in the giveaway/takeaway column.  To put that into perspective, the Panthers only turned the ball over 19 times all of last season and they were +20.  To make matters worse for Carolina, the Cardinals at tied for second place in the league with 14 takeaways this season.  The match-up for Carolina’s once proud defense is even darker.  Arizona is a top 10 offense in yards but only middle of the pack in points, but the Panther’s defense ranks near the bottom in every category.  If the Panthers are going to pull off the upset, Cam is going to have to become the player he was last season.

Prediction – Like the Bucs and the Saints, the Panthers have the home field advantage, but at the end of the day I’m guessing that their fans would have not paid to come see their team on that day.  Everything is stacked in Arizona’s favor.  31-17 Cardinals

You would think that this match-up would have caused a bit more smack talk on FYS than it has, but Packer fans seem to have accepted the fact that their team is struggling this season (even though they’re 4-2) and the Atlanta fans have been cautiously and quietly optimistic.  This game is going to come down the offenses, because neither team has a defense to write home about.  It’s Aaron Rodgers vs Matt Ryan.  Jordy Nelson vs Julio Jones.  Fireworks galore.  Conventional wisdom would give Rodgers and the Packers an edge in a shoot-out game, but something seems off about Mr. Rodgers.  This season and last, Rodgers’ rating has been in the low 90’s.  Now we know that many teams would love to have a QB whose rating was in the low 90’s, but that’s not Aaron Rodgers who had six consecutive seasons of over a 100 rating prior to last season.  The running game is averaging just over 100 yards per game, but this isn’t what many Packer fans where hoping for when Eddie Lacy trimmed down during the off season.  The fact that Lacy will not play is a big blow to the Packers offense.  On the other side, Atlanta’s offense has been on fire; at or near the top in most offensive categories.  Their “weak” spot is the running game which is “only” producing about 115 yards per game.  I know Atlanta fans won’t like that I’m not going to give a lot of the credit on offense to Matt Ryan, but one look at Julio Jones should make them understand.  The only reason Jones isn’t a once in a lifetime receiver is because Calvin Johnson also played in our lifetime.  Jones is leading the league in total yards as well as receptions over 20 yards and is either top three, or very near the top in every other receiving category.  This is why the Packers are praying for help with the 6th year receiver.