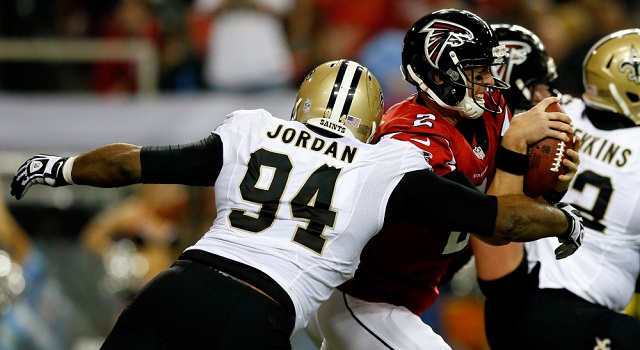 Happy top of the morning to all you fine folks and MiB.  Yes, I am a bit chipper today, thank you for noticing.  To save you the trouble of asking, I will tell you why I’m in a good mood.  I got to the office about 30 minutes ago and was the only one here.  Well, not the only one, the warehouse gets here at 6, but they don’t come up here.  I’m all alone and can get shit done without people bothering me.  I could do all those tasks that I’ve been meaning to do by haven’t had the time.  I could do all that, but well all know I’m just going to fuck off, write this and not get a damn thing done today.  I’m okay with that.

Some of you may be wondering why I chose to have the main image be one of Cam Jordan sacking Matt Ryan.  Well, outside of the fact that it’s Cam Jordan sacking Matt Ryan, which is great and funny all wrapped into one, it’s also a record.  You see, with that sack, Mr. Jordan set the NFL record for most sacks by one player on one QB at 18.  Until he did it, I didn’t even know the NFL kept such records, but there you have it.  18 games, 18 sacks.  Pretty neat.

Let’s see how you fucks did last week, shall we?  Our very own BP was the big winner with 3 points pulling him into a tie for 7th place with LKP, so he didn’t really win anything.  Curtis picked up 2 points as well as 2 more kids, putting him into a tie with yours truly for 3rd place, since I only got one point.  Gabes and Nate got a point each to keep their lead at the top.  Jmac even got a point, but fuck him since he never comes around for use to make fun of him.

(BP with the Saints and me with the Packers.  Strange.)

(You miss all the shots that you don’t take.)

The above only represents games that involved the NFCN or NFCS.  If you wish, the leader board for those who weren’t too “busy” to pick all the games is here.  This only contains those of you who actually scored a point in CYST.  Want to see your name here?  Do better and stop sucking like Glove does at being a Packers’ fan.

We have a NFCN game tonight when the Cowboys of Dallas, Texas travel to Illinois to battle the Bears of Chicago at historic Solider Field.  Might actually be a good game considering both teams are fighting for their lives and their coach’s job.  No matter if you watch or not, get your butt over to CYST and make a pick for all the games, or be a bitch and just pick the NFCN/S games.  Go, go make your picks.  How do you get to the site so that you can pick games?  Well, that’s a good question.  If only there was a uniform resource locator in the form of a hyperlink.