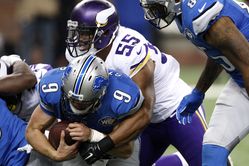 The Detroit Lions (1-6) were destroyed by the Minnesota Vikings 28-19 on Sunday at Ford Field. The Lions were outclassed allowing 7 sacks and 13 QB hits despite a great first quarter for Detroit. Let’s take a look at how terribly Detroit played.

Hope and optimism were rampant. Detroit had scored 37 points the previous week and started the game on fire. Stafford hit Calvin Johnson for 44 yards on a crucial 3rd and 3. The Lions had two nice runs in the red zone from Riddick and Abdullah to get a first down. Stafford hit Calvin on a beautiful TD pass for 5 yards. Detroit’s start couldn’t be better.

The Vikings responded with a 15 play 63 yard drive but the Lions once again held strong in the red zone (like against Chicago) with pressure on 2nd down (Van Noy sack) and good coverage by Mathis on 3rd down against Jarius Wright. The lead was cut to 7-3.

Detroit remained hot with a 55 yard pass to Ebron and a 14 yard run by Bell. Abdullah ran for 9 yards and Stafford hit Ebron for a 7 yard TD. The Lions offense looked unstoppable and Detroit led 14-3.

The Vikings responded with a FG drive again sparked by a 30 yard crossing route to Stefon Diggs on 3rd down which burned Mathis badly. The Vikings really found something with this 5th round rookie. The Vikings had two good runs for a first down following the big play. The Lions defense yet again stood tall in the red zone and Ngata sacked Bridgewater on 3rd down causing a 53 yard field goal. Walsh made the long kick to cut the game to 14-6.

The Lions quickly moved the ball into Vikings territory on the next drive after pass interference by Xavier Rhodes on Calvin Johnson for 26 yards. At this point, the Vikings decided to start blitzing and Greenway sacked Stafford on 2nd down. A deep ball to Calvin failed on 3rd down and the Lions punted. The Vikings converted a 3rd and 9 for 21 yards on the next drive. However, the Lions catch a break on a botched handoff between Bridgewater and Peterson and Tulloch recovers a fumble at the Minnesota 42 yard line.

Following the turnover, Detroit earned one big first down with a 13 yard Abdullah run. However, Everson Griffen was unblocked for a 12 yard sack which essentially killed the drive. The Lions try to get yardage back with a 4 yard pass on 3rd and 22 and Prater nails the 52 yard field goal to save face for Detroit. Detroit converted the turnover into 3 points only. Detroit is up 11 for the second time in the game at 17-6.

The wheels fall off the wagon for Detroit on defense. Bridgewater hits Diggs for 11 yards and Zach Line wide open in the flat for 49 yards. McKinnon has two good runs for another Vikings first down in the Lions’ red zone. The Lions appear to be holding strong until Rudolph makes a one handed grab on 3rd and goal for the 1 yard touchdown. Walsh misses the extra point and the Lions lead is cut to 17-12.

The Lions went 3 and out in the two minute drill. Harrison Smith has a big sack on second down which kills the drive. Stafford hits Ebron for five yards only on 3rd down and long and Ebron runs out of bounds giving the Vikings crucial time on the clock. Mike Wallace and Jarius Wright catch back to back 11 yard passes on Vikings second downs for first downs. The Vikings are in field goal range easily. Ziggy Ansah and Haloti Ngata come up big and force a sack/fumble. The Vikings luckily recover the fumble and the Blair Walsh hits a 51 yard field goal to close the half. The Lions lead is cut to 2 points.

The Vikings have the momentum and it carries over with the ball to start the second half. The Vikings move the ball 8 plays for 78 yards with ease. Bridgewater hit Wright and Rudolph for first down passes. The Lions look like they will get a stop on a sack on a 3rd and 11 but rookie burnt toast Diggs has a defensive holding penalty. Bridgewater hits Diggs for an 11 yard first down. Finally, Diggs catches a miracle 36 yard grab on a dive on an overthrown ball after a double move. Great play by Diggs and the Vikings lead 22-17.

Detroit runs the ball twice and found themselves with a 3rd and 5. Golden Tate runs a route short of the sticks and the 3 yard catch means another 3 and out for Detroit. Adrian Peterson was held in check almost all game by Detroit. After the Detroit 3 and out, Peterson ripped off a 75 yard back breaking run. Jason Jones lost the edge, Travis Lewis whiffed in the gap and Ihedigbo took a horrible angle. Ziggy Ansah was able to track down Peterson on a great hustle play from the right end spot as Peterson was steam rolling Glover Quin. It was pretty incredible a DE could do that and it saved a touchdown. Detroit held strong in the red zone again and the lead was only 25-17 for Minnesota.

Detroit really forgot how to block on the next drive. Eric Kendricks was untouched on a 4 yard sack on first down. Everson Griffen and Anthony Barr were unblocked on 3rd down for another sack. Detroit punts again. Stafford hurt his non-throwing hand the play and screamed at the Lions offensive line on the side lines. Stafford needed to put on a glove. That is always bad news for Detroit.

Minnesota received great field position on their own 47 yard line after the Detroit punt. Peterson rips off a 12 yard run. Detroit should make a stop on 3rd and 12 but they allowed Mychal Pruitt to break two tackles and get 13 yards for a first down. Slay has his eyes in the backfield and allows a 30 yard pass to Adam Thielen to the Lions 2. Impending doom for Detroit is near.

The Lions for the millionth time hold strong in the red zone. The Vikings kick a 5th field goal and are up 28-17. The Lions were up 11 points twice in this game and now trail by 11 points early in the 4th Quarter.

Detroit musters a first down on a penalty by Xavier Rhodes on the next drive. However, another sack by Kendricks followed by a delay of game penalty caused a 2nd and forever. Tate gained 11 yards but the Lions stupidly run a sweep on 3rd and 13. They are not even trying at this point. Lombardi should be fired for that play call alone.

The Lions force a 3 and out finally but Detroit responded with another offensive 3 and out. Tom Johnson gets a sack on 3rd and 9 to end that drive. Stafford has been sacked 7 times at this point. The Lions have 5 yards of offensive in almost three quarters of play. This is unacceptable poor play by Detroit.

Detroit defense shows some pride with another stop on a 3rd and 1 of Zach Line. The Lions mercifully move the ball on the next drive. Detroit drives 88 yards and had three chances from the 1 yard line. George Winn and Michael Burton are stuff on 2nd and 3rd down. On 4th down, Stafford throws a rocket to incomplete to Theo Riddick. Turnover on downs and the game was all but over.

The Vikings are stuffed again by Detroit and concede the safety by running out of the end zone on a punt. Detroit gets a first down but on the next series Stafford slides short on 3rd down for some reason. Detroit misses deep to Lance Moore on 4th down and the game is over after a Vikings kneel down.

Detroit started hot for 14 points in the 1st Quarter. Stafford was 69% completion for 9.8 YPA. However, Detroit allowed 7 sacks and 13 QB hits the rest of the game and couldn’t convert late 4th downs.

Detroit’s coverage was poor when there wasn’t pressure as big plays to Stefon Diggs and Zach Line were the biggest problems. Bridgewater completed 71% of his 35 attempts with 9 YPA average. An untimely penalty on Quandre Diggs massively hurt Detroit allowing the Vikings to get the lead with the miracle catch by Diggs. Mathis, Slay and the safeties were all to blame on poor coverage throughout the day. Detroit got a good amount of pressure but when they didn’t get any, Bridgewater had all day to throw.

Detroit got good pressure on Bridgewater with 4 sack and 11 hits and notched a +1 in the turnover differential. Ngata had a great game for Detroit along with Ansah. Tulloch and Bynes were strong in run defense. Detroit’s run defense was good except for a 75 and 12 yard run by Peterson. Detroit was strong in the red zone while holding the Viking to five field goals. However, the inept blocking and poor coverage doomed Detroit for a 6th loss on the season.

The Lions bring their clown show on the road internationally to London next Sunday. Detroit (1-6) square off against the Kansas City Chiefs (2-5) in London (Wimbley Stadium) at 9:30 AM (ET).