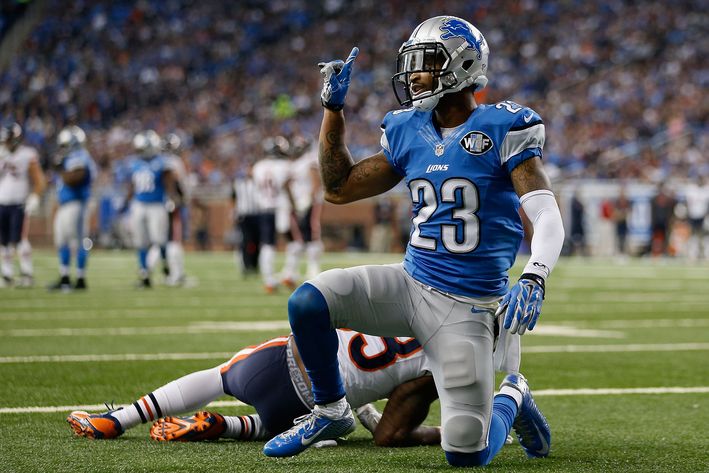 The Detroit Lions (1-5) survived one home divisional game with a win (37-34 OT) last Sunday against the Chicago Bears. Detroit hosts another divisional rival in the Minnesota Vikings (3-2) at Ford Field at 1 pm (ET) on Sunday. Detroit lost Week 2 at Minnesota by a score of 26-16. Adrian Peterson had a huge day rushing the ball, Bridgewater was efficient in only 18 throws and the Lions turned the ball over 3 times. Detroit will look to correct these issues in Week 7 at Ford Field to split the season with the Vikings.

Stafford was under pressure on 37.9% of his drop backs in Week 2(22 of 58) and went 7/20 under pressure. Stafford was 25/33 without pressure (75%) which included the interception to backup defensive end Justin Tratteau on a WR screen gone terribly wrong. Left Tackle Riley Reiff (1 hit and 6 hurries) and backup right tackle Cornelius Lucas (1 hit and 5 hurries) had terrible days in pass protection. Right guard Larry Warford also struggled returning from an ankle injury in both run and pass blocking. Left guard Manny Ramirez was the only good pass blocker on the day. Stafford was hit 8 times in the game and had bruised ribs and elbows after the game.

The Vikings have a strong pass rush led by Everson Griffen (11th ranked pass rush grade in league for all 148 edge defenders (DE/OLB). Griffen tallied the lone sack allowed by Detroit in Week 2. Left End Brian Robison is 23rd ranked pass rusher and will face a struggling LaAdrian Waddle (who has not looked the same since his ACL injury last season). Shariff Floyd is a stud DT and 15th ranked pass rusher for all interior defenders while Linval Joseph is ranked 14th out of 184 defenders.

Anthony Barr and Eric Kendricks can bring the pressure on the blitz. The Lions offensive line will have their hands full again in Week 7. The pressure could cause more Stafford picks and help Minnesota hold the Lions to 16 points again.

The Lions run defense had a terrible day Week 2. Peterson had 134 yards at 4.6 YPC and Jarius Wright had a 29 yard reverse. The Vikings had 199 yards rushing in the game. Teddy Bridgewater had some clutch scrambles for first downs including a touchdown scramble on 4th down. Detroit lost both starting DTs to injury since that game and still don’t have DeAndre Levy (hip). Ngata (calf) must play or Detroit could be in for another long run defense day. However, Detroit (without Levy, Ngata and Walker) did well to keep Chicago and Matt Forte in check during Week 6. So who the hell knows.

Peterson has struggled in two games against the 49ers and Chiefs but has been excellent in his other three games (Lions, Chargers and Broncos). I pray to moon jesus that bad Adrian shows up.

Detroit has had 4 good rushing defense days and 2 poor days (Arizona and at Minnesota). Overall, Detroit ranks 19th at 4.0 YPC allowed. Detroit’s good run defense must show up this week or it will another long day defensively for the Lions.

Bridgewater didn’t have to do much in Week 2 with only 18 attempts and some big first down scrambles. Bridgewater is completing 64% of his passes on the year but has only 3 TDs and 4 interceptions in five games. Detroit must find a way to pressure Bridgewater, force two turnovers and lower his efficiency.

The Vikings offensive line has given up a high number of pressures in five games. Ziggy Ansah has been strong in pass rush and has 5 sacks on the year. Ansah had the lone Lions sack in the Week 2 game. Ngata has been good in pass rush in his 3.5 games played but may not play again this week. Jason Jones was solid in pass rush but was injured (neck) against Chicago. Tyrunn Walker is out for the year with a broken leg. The Lions defensive line is injury riddled this year.

Detroit must find a pass rush with Ziggy Ansah and their backup defensive linemen in this game. DC Teryl Austin must be smart with his blitz calls and not expose the secondary too much to allow big passing plays. The Lions blitzes must hit home and more importantly finish Bridgewater when they are called. The Kyle Van Noy blitz where he hit Bridgewater but the ball was flipped to Peterson for a 53 yard gain is a perfect example of how not to finish a QB. I’m sick of seeing an opposing QB scramble away from immense pressure and throw a strike as the coverage breaks down after too long of time on the play. Bridgewater has the mobility to make this happen.

The Vikings weapons have been lackluster this season but Stefon Diggs has emerged with two good weeks at Denver and against the Chiefs. Mike Wallace is still a deep threat if Bridgewater gets time to throw. Bridgewater hasn’t had much time this year being pressured over 40% of his drop backs. The Lions have given up some big plays this year. Charles Johnson may return from an injury. Even former Packers WRs are getting hurt this year. Tight end Rudolph had the lone Viking passing TD reception on the day on the first drive of the game in Week 2. Rudolph is a threat as the Lions LBs have struggled some in coverage this season.

The Lions are 1-5 due to 18 turnovers in 6 games. They have 8 fumbles from 8 different players. This matches their fumbles lost total for all of 2014. Stafford has 9 interceptions (5 his fault).The Lions have a 3 turnover per game average which is an awful 48 turnover pace for the year. Another 3 turnover day on Sunday could doom the Lions for a 6th loss.

The Lions rush offense was shut down in Week 2 by the Vikings defense with only 2.3 YPC. Stafford was the Lions leading rusher with 20 yards. This can’t happen again. Abdullah must run well and hang onto the ball. Theo Riddick ran well in Week 6 and Joique Bell may return from an ankle injury (missed 3 games). The Vikings have given up 4.5 YPC on the season so they can be run against with good blocking. Detroit did not have good blocking Week 2 and the Vikings had their best rush defense game of the season.

Stafford was only sacked once in Week 2 but he was pressured way too much as noted. The Lions started slow with 2 punts in the first quarter and allowed 14 points defensively to the Viking offense. Detroit had two good series in the second quarter for ten points but a forgetful rest of the day with 3 turnovers in the second half plus two punts. Detroit had a garbage touchdown but the two point conversion failed as Bell was stuffed on a curious run call.

Detroit needs to avoid turnovers and move the ball for scores on at least four drives on Sunday. Calvin Johnson (83 yards and TD) and Golden Tate (80 yards) had nice days in Week 2 but some other Detroit weapon must step up in Week 7. During Week 6, Lance Moore stepped up with 100 yards and TD. Eric Ebron(knee) and Brandon Pettigrew (knee) are both hurt and may not play. Ebron had the late TD in Week 2 and Calvin Johnson had the TD in the second quarter on a great catch on the sidelines.

Detroit must get a monster day from Calvin or Golden Tate and run the ball with an average YPC to have a chance in this game. Stafford being pressured only 30% of his drop backs in a game or less would be a nice change of pace. Stafford has completed 64% of his passes but only with a 6.8 YPA. Stafford hitting some passes over 20 yards is crucial for this game. The Vikings are 8th in QB rating allowed and 8th in YPA coupled with a strong pass rush. Detroit must find a way to have a good day throwing the football while protecting Stafford.

No more predictions. I just hope Detroit stops turning the ball over at an insane rate and the Lions show some semblance of an NFL offense. Limiting the damage from Adrian Peterson is probably a must for a Lions victory. Two home divisional wins in a row would help with this miserable season. I won’t even get into playoff scenarios until they get to 3 wins, which better be in the next two weeks or they are even more toast than their current high level of toastiness.