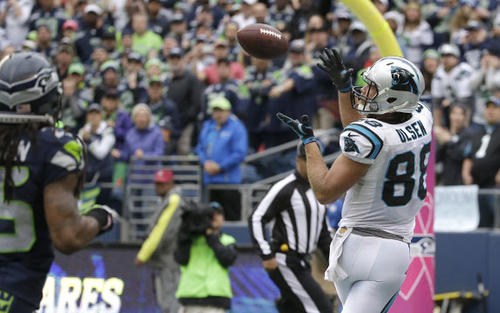 Did we actually do it? Did we hit rock bottom, and have begun to climb out? I want to believe, I really do. This week is helping restore my faith in our prognosticators. After two weeks of 10 points, and 12 last week, we scored 16 points this week. That’s right, we’re making baby steps in the right direction. Lets keep this ball rolling, and keep the number of points scored going up.

This was also a good week in that we saw some more against the grain predictions come true. Early in the season these can be rare, but as the season moves on I hope that we can see some more of these. There are definitely some teams that are not as strong as they appear, and may be ripe for an “upset” just as Seattle was this week.

We have some new names on the leaderboard this week. The top position is still being held by Gabes222 with another point scored, but there are a few people on his heels. By scoring another point this week, ALLSAINTSROW moved out of a sole possession of third into a tie for second place with six points. After them, we have a new three-way tie for fourth place. With two points scored by each of Big Deal and Nichels they move into that tie for fourth. This was a good week for some others as well, as there are still four people sitting just off the board with four points, and another five people with three points. One good week from any of them, and we could see their names up here.

With that said, here is the leaderboard after Week 6 (in the case of a tie, the names are arranged alphabetically):

Again, I just wanted to give one last big shoutout to all the people named above. We again had a slightly better week than the previous, so I’m hoping that this will continue.

Now let’s give a little congratulatory clap to all the people who are listed in this article. Or not. Your choice.